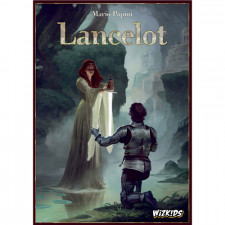 The legend of King Arthur is a tale of virtuous knights, heroic deeds, and quests to become Mr. Steal Your Girl. At least, thatâ€™s what it is in Lancelot â€“ a game in which you go â€˜round and â€˜round the mythical realm until you can woo Guinevere with your fistful of victory points. This salacious premise may lure you in, but you will soon realize that thereâ€™s more wrong with the game than the goal of an extramarital affair. 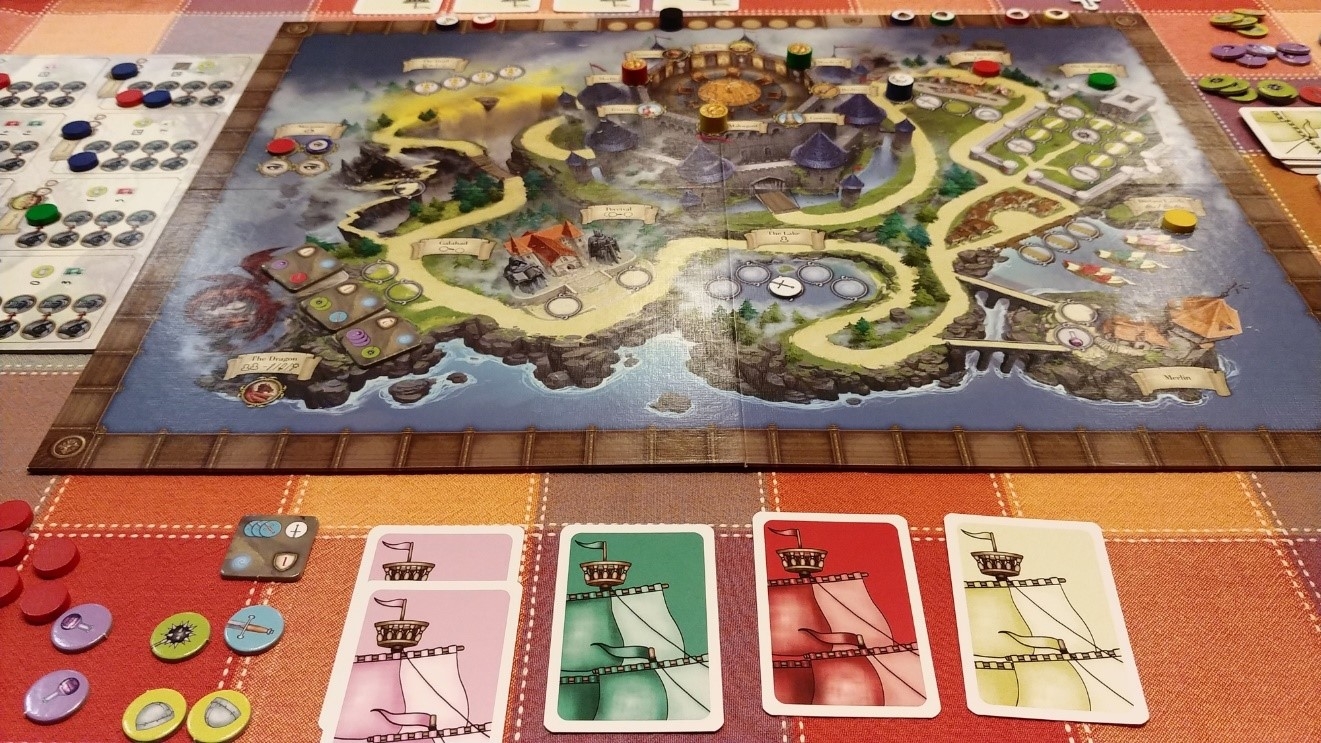 They had numbers in the middle ages, so there's no excuse for a blank VP track.

Lancelot functions as what I can only describe as a roll-and-move game without the rolling. On your turn, you move your knight clockwise around the board, stopping at any spot along the way, even if an opponentâ€™s knight is there. Itâ€™s like a farmerâ€™s market, but with weapons and quests instead of organic produce and handmade jewelry. Taking actions on a space are sometimes immediate, but others require you to waste time moving along a track before picking up different resources. This means that some turns only consist of moving to the next spot and nothing else. This is possibly the least exciting thing you can ever do in a game. You may think that being forced to bide your time will reap greater rewards, but you would be wrong. You do get more or different items, but theyâ€™re not necessarily better. Depending on the track, you acquire resource counters gussied up in medieval dress: swords, maces, lances, squires, and the uncreatively named Merlinâ€™s magic. There are also plots, ladies, allied knights, and enemies, which are also resources, but in a card shape and are only otherwise differentiated by their limit of seven. Once you acquire these resources in varying amounts, you can go over to the virtues board and show off your Ren Faire outfit to earn victory points.

The virtues board consists of eight different combinations of counters and cards. Some require an exact number of items whereas others require you to have more or less than other opponents. Though the one-upmanship of getting the right number of resources to earn a particular virtue should drive the players decisions and competition, the reality is youâ€™re only ever waylaid a turn or two. Since virtues are available to everyone, most players will end up completing most virtues as resources ebb and flow over the course of the game. While virtues donâ€™t require you to expend your resources, deeds do. By stopping at the dragon, you spend resources to acquire one of the deeds. You earn a measly 1 point, or 2 points if youâ€™re lucky, making the tedious work of gaining those counters feel all the more insulting. Outside of using a Merlinâ€™s magic counter, deeds are the only way to dump resources when you need to qualify for a specific virtue. 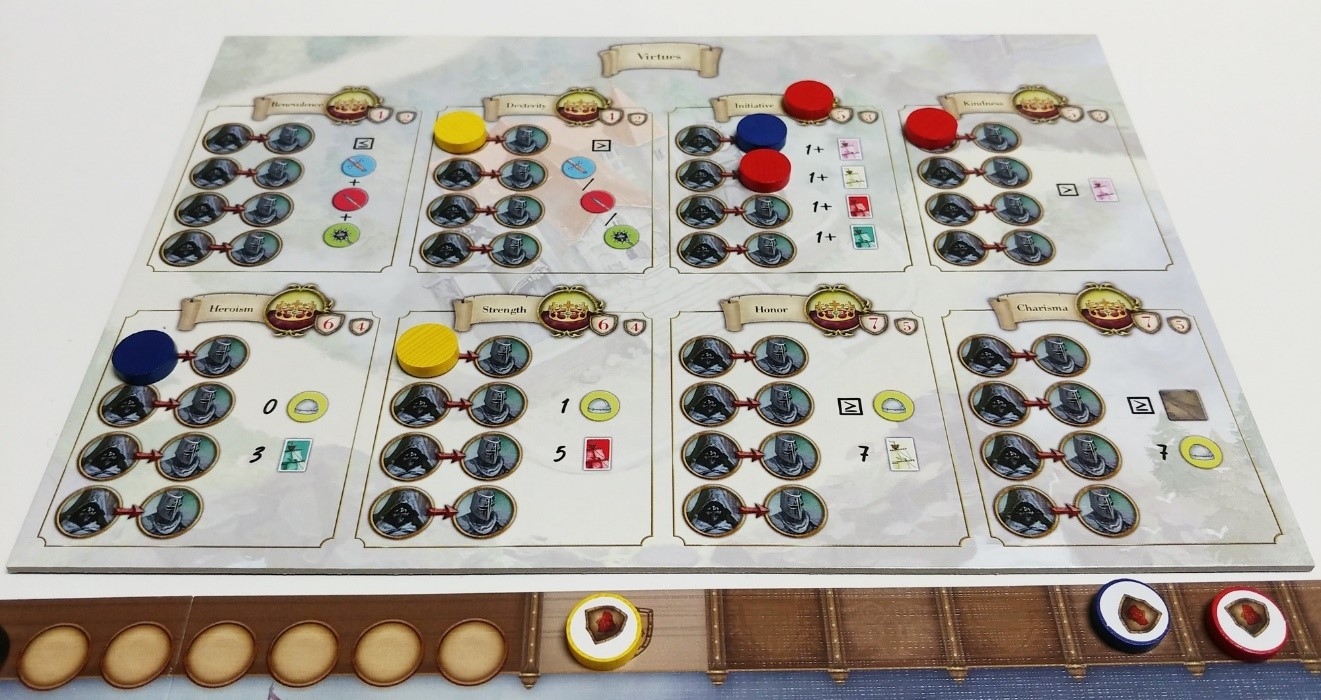 Weird, I donâ€™t see Infidelity on the virtues board.

You will never obtain more than one virtue per turn, which is forcefully paced by the Galahad and Percival spaces. The former action makes you eligible to obtain a virtue and the latter allows you to actually claim it. Since Galahad comes after Percival in the clockwise rotation, you can never do a one-two punch for a virtue in the same round, causing you to stretch things out over at least two rounds. Laborious as this is, itâ€™s worsened by the same virtues being out in every game. Iâ€™m not usually in the â€œvariable setup makes for replayabilityâ€ camp, but Lancelot is screaming for it in a less-than-gallant bellow.

To deal with how protracted the process of gaining resources is, you can hasten the process through using knightâ€™s advantages. When you finish your lap around Camelot, you choose which knight to use in the next round, providing a benefit to a space on the board. For example, Bedivere and Gawain allow you to move twice along the joust and stronghold spots where you get those resource counters. Arthur lets you claim the higher VP value on the virtues board and Maleagant reduces the weapon cost by one on a deed tile. By putting your color disc on the corresponding spaces, you can use the knightâ€™s benefit there in future turns, even if you choose another knight, until another player bumps you off. Yet again, the race to grab a particular knightâ€™s advantage is clearly designed as a way to incentivize playersâ€™ decisions as they move along the board. Although players who plan ahead will likely fare better, this doesnâ€™t translate to actual fun. 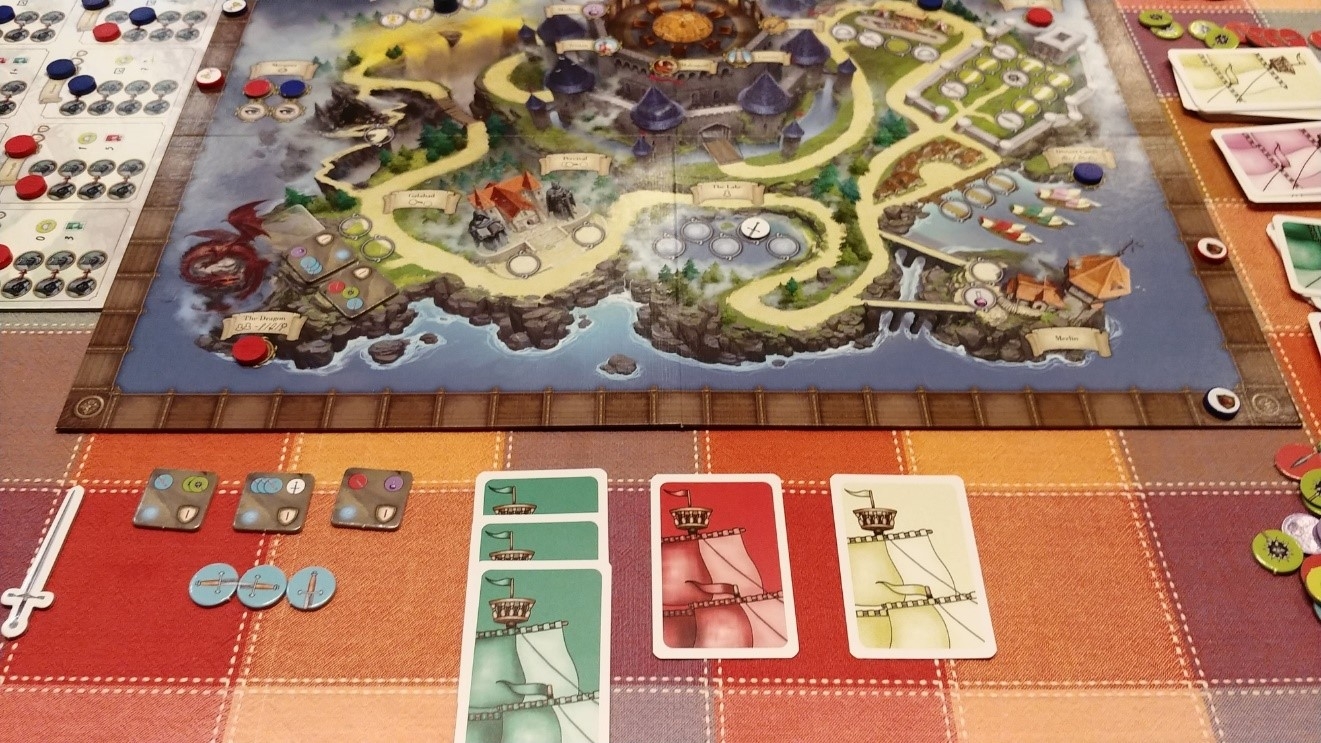 The Excalibur token is coolest part of the game and it's not even that cool.

Nothing in Lancelot is new or even a repacking of good ideas. Weâ€™ve seen the canâ€™t-play-behind-you mechanic before in games that do it much better. Higher player counts do make for more competition for the limited spaces, but does little to relieve the apathy around the table. The grail track acts as a kind of incentive to finish your rotation around the board, but stymies itself with a â€œcan never move ahead of the player in frontâ€ rule. Lancelot is full of odd design decisions like this that drag it below the unflattering status of â€œjust another soulless Euroâ€. If I were Guinevere, I would say no-thanks-a-lot.