RC: Last Friday sets out to do something admirable: translate a horror movie to this cardboard medium. Itâ€™s a rather lofty goal. Horror depends on mystery and the unknown. A board game, even one with hidden movement, generally has everything visible front and center. While it canâ€™t keep the tension up for the whole game, Iâ€™d say it mostly succeeds at this task. What do you think?

BC: It definitely plays on a lot of horror tropes. My favorite thing about the game, what really sets it apart from other hidden movement games like Letters from Whitechapel and Scotland Yard, is its four-act structure. The role of hunter and hunted changes hands often as each chapter introduces new rules for interactions between the campers, who are always visible on the board, and the killer, whose exact position is always hidden. The campers start out as blind prey, but in chapters 2 and 4 they get the opportunity to turn the tables and play hide and seek with the maniac. Midway through the game, one camper takes on the additional role of â€œpredestined,â€ a sort of â€œlast girlâ€ who must survive the maniacâ€™s wrath in act 3 but is the only one capable of killing him for good in act 4. 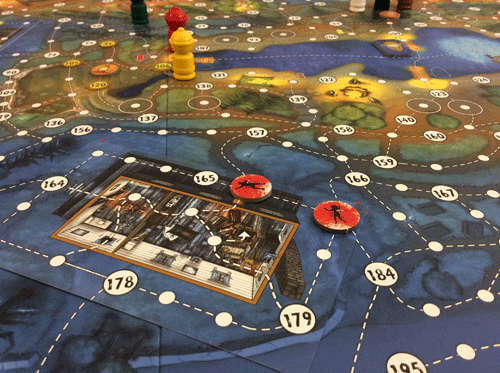 Iâ€™ve heard some players complaining that the maniac has the odds stacked against him, taking away from the horror movie atmosphere and making it feel more like an episode of Scooby Doo. Did you get this impression while playing as the maniac?

RC: I did in some plays, but not in others. The inconsistency is my biggest gripe - Iâ€™ll get into that in a bit - and it led to some games as the Maniac feeling like Michael Myers and others feeling like I was in a Scary Movie parody. Iâ€™ve seen plays where the Maniac kills 2 or 3 in the first chapter and rides his power token advantage through the game. Iâ€™ve also seen plays where heâ€™s effectively trapped from the start of a chapter. While I truly love the four-act structure and the way it mimics the arc of a classic slasher flick, the changes happen abruptly. The Maniac runs through the forest on a murderous rampage for the entirety of Act I, hoping to get as close as possible to the campers when abruptly the script is flipped. Strategically the Maniac should pull back a bit and hide in preparation of the next round but that doesnâ€™t feel like something a Vorhees would do.

BC: Thereâ€™s definitely an element of momentum, and thereâ€™s a learning curve to anticipating the turn of the tides, but I actually think these two elements offset each other somewhat. The maniac can win by killing all the campers in act one, but if he fails in that task (and frankly, with halfway competent campers, itâ€™s pretty freaking likely), thereâ€™s no winner until act 3 at the earliest (the campers actually â€œkillâ€ the maniac in chapter 2, but of course that doesnâ€™t stick). Does that make the first two chapters meaningless? No, because the killerâ€™s body count and the surviving campers determines which team will gain an advantage for the next act. Itâ€™s almost like an area control minigame. Getting a good kill streak going in act 1 is essential for a maniac win in act 3, but doing that means acting aggressively and maybe entering act 2 from a more exposed location. Alternately, the killer can spend a few rounds skulking around, maybe trash a cabin to use as a lair later on, and become one with the shadows for the second chapter. I like that thereâ€™s more than one strategy.

The abrupt endings can be frustrating, however, when you miscalculate your path and find yourself one round short of that Predestined kill. This isnâ€™t a problem with Last Friday specifically, but it seems like itâ€™s the biggest flaw of the hidden movement genre, and Last Friday doesnâ€™t do anything to address it. You have to be pretty good at spatial reasoning to analyze the best routes (dark, shaded paths generally give the killer an advantage while brightly lit trails give the speed advantage to the campers), and even then, itâ€™s discouragingly hard to bounce back from a mistake.

RC: Itâ€™s a bit of a mismatch. The most fun Iâ€™ve had with The Last Friday is when weâ€™re playing fast and light, moving quickly and not overthinking anything. Unfortunately, that leads to some record-scratch moments where a miscalculation gives us a disproportionate penalty. It rewards strategic play at the same time that the short microturns exacerbate any downtime. That downtime can really kill the tension which is a shame because when itâ€™s really firing on all cylinders this game provides some amazing horror movie tension.

I played at GenCon and will never forget the moment the maniac stepped into a lantern space and there was an audible gasp around the table. We thought we knew where the killer was thanks to the gameâ€™s movement reveal mechanic, but clever play brought him right on top of us. It was the perfect horror movie moment. Another time 4 campers had the Maniac cornered by the old church and every movement was made with tension and trepidation. It was brilliant.

BC: It definitely makes for some great slasher-movie moments. I love those dramatic reveals every three rounds where the campers get to see the maniac lurking in the shadows, especially in the chapters where theyâ€™re actually looking at where he was three rounds previously. My favorite bit is the giant lake in the middle of the board, which the campers can cross one at a time in rowboats and the maniac gets to just swim across once per round. It helps alleviate that loss of tension you sometimes get in hidden movement games when thereâ€™s a significant distance between the players and the killer. The maniacâ€™s screen is also a nice touch, with a mini map of the board so the other players canâ€™t read his eye movements and a menacing eyeslit for him to peer out of. 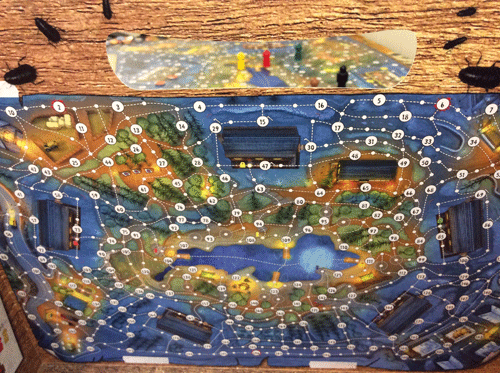 The maniac screen allows the killer to peep from the shadows.

Honestly, the gameâ€™s biggest flaw is that, despite the multiple versions of hide-and-seek you get through the four chapters, none of them feels particularly new. The climactic chapter four is just Scotland Yard, the movement rules are straight from Whitechapel, and nothing feels new except the slasher milieu. I enjoyed my plays for sure, but I canâ€™t think of a single reason to recommend this over Whitechapel or Fury of Dracula. Can you?

RC: I honestly canâ€™t say, as I havenâ€™t played either! Iâ€™m definitely more attracted to the setting of Last Friday than either of the others. Iâ€™ve loved slasher flicks ever since I started watching them at far too young an age. The Last Friday does a great job at translating that structure to a board game. Unfortunately that same structure holds it back in some very mechanical ways. Iâ€™ve certainly enjoyed my time at Camp Apache I just didnâ€™t fall in love with it.