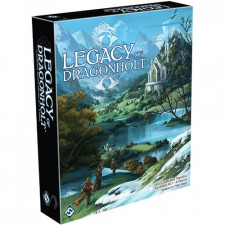 GP: Weâ€™ve seen many games in the past few years take a Choose Your Own Adventure approach to their storytelling. Often, however, the narrative takes a backseat to other mechanics that drive the game. Legacy of Dragonholt is no Miss Daisy though. At the forefront is everything you loved about those books as a kid with threads of an RPG woven throughout. How the designer, Nikki Valens, pulled this off is still beyond my comprehension.

RC: The hardest aspect of RPGs to pin down in board games has been player choices mattering and having impact. While it isnâ€™t too hard to include some simple choices that toss the players a few extra gold or a branching scenario path, itâ€™s rare that these products make the world feel like it reacts to the player. Thatâ€™s the most impressive part of this product; I feel like I am changing the world through my actions even though I know Iâ€™m working through a scripted product.

GP: Absolutely. I think one of the things that aids this feeling is being able to create your own character. There is a real sense of ownership of your actions and immersion with the story, simply by knowing that you are making decisions based on your characterâ€™s design. Character creation in RPGs can be an intimidating process as you roll D6â€™s and scribble numbers under various stats. But for the RPG-phobic, Legacy of Dragonholt holds your hand throughout this process. There are no dice or real stats to keep track of. Just some skills and background flavor of your choosing so as to drive your decisions one way or another through the story. My young, brusk dwarven sage is skilled in arcana, history, and even craftsmanship in case she ever wants to open her own Etsy store. I became so invested in what happened to her in a way thatâ€™s much more palpable than a Choose Your Own Adventure book.

RC: These abilities later influence the story in major ways. Dragonholt adds to the standard â€œWhat do you do?â€ structure of Choose Your Own Adventure books by often giving you an additional option that reads â€œIf you have [skill]â€. These little moments are exciting for those who have the skill and add a touch of mystery for those who donâ€™t. Youâ€™re left wondering what you could have done. If you see enough of these, it just might push you in a certain direction when it comes to spending your limited XP on new skills. Dragonholt has a clever growth system that allows you to change your characters in response to the challenges youâ€™ve seen. My battle-mage wasnâ€™t quite battley enough, so I pushed to add some combat skills at the first opportunity. 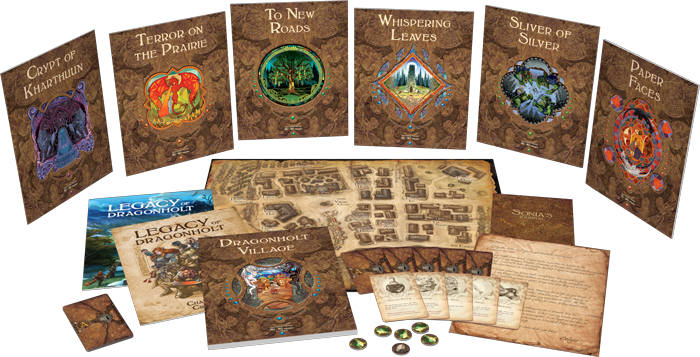 Comes with everything you see here.

GP: I did a similar thing; blowing my hard-earned XP on those areas I kept seeing pop up. I like to think it made my dwarf a better person. The XP is not doled out at bargain bin prices. In my whole campaign, I only had a few points, making the decision of where to spend them feel tense. I wanted to be a mean fighting machine and discover all those paths I was previously shut out of. I also wanted to deftly avoid traps, pick peopleâ€™s pocket change, and then serenade them. Of course, you canâ€™t do it all, which means thereâ€™s much of the story left for me to uncover even though Iâ€™ve â€œfinishedâ€ the game.

RC: Thereâ€™s more to uncover outside of character creation as well. The box comes with a number of tantalizing books. Itâ€™s quickly revealed that these are major and minor story quests but there is no guarantee that you will go on all of them in a play-through. Like any good, expansive RPG, you have to discover clues and hints about these quests and if you donâ€™t... you just donâ€™t get to go on them. Thereâ€™s no way to pause or ignore the time-pressure that is pushing you towards the main storylineâ€™s conclusion. I love the idea of coming back to Dragonholt with new characters, but Iâ€™m more excited about the fact that thereâ€™s more story to discover. The Silver Mines call me back.

GP: I didnâ€™t even make it to The Silver Mines! Starting again will mean repeating the main storyline, but coming in with some previous knowledge may mean you want to pursue certain side quests that you werenâ€™t able to before. Besides, itâ€™s not like people donâ€™t reread books, which have the exact same story, and not enjoy them a second time around. I would like to move forward in future campaigns, carrying over my dwarfâ€™s history and skills and hopefully becoming even more powerful. Though the prospect of not having more content is a bit of a bummer, I am still happy with the game as it is now.

RC: Legacy of Dragonholt is an ambitious product that stands out amidst the hundreds of games Iâ€™ve played over the years. Itâ€™s got a refreshingly diverse and inclusive cast of characters, itâ€™s at once familiar and innovative, and it has that â€œjust one more playâ€ addictive quality that draws you back. I really hope Fantasy Flight adds more to the Dragonholt story, and also hope they explore some of their other settings with a similar title. A noir mystery in Androidâ€™s New Angeles? The adventures of a bounty hunter in the Twilight Imperium universe? Iâ€™m in for all of them.