Apart from making it sound even more like a mafia game (the original slogan being "a boardgame in which The Family always comes first"), Legacy: Five Families doesn't do much to expand Michiel Hendricks' family-building card game's horizons. This 100-card expansion has lofty dreams, adding 4 modular game elements into Legacy's already cramped playspace, but a mix of ambiguous rules and half-realized ideas leaves it feeling underendowed.

The stars of the show are the titular five families, great Parisian houses who aim to exert their influence over your affairs. In the multiplayer game, in addition to a Patriarch/Matriarch and a Patron, each player now receives a 12-card Family deck. At the end of each round, during the Income Phase, there's now a sort of auction in which each player offers his or her cousins and family assets to the competition. The cost is paid in Favors, which can be cashed in later to perform actions on a new Favor board. These range from minor treats, like taking a coin or Friend from an opponent, to hop-the-queue maneuvres and free actions.

The Favor board is a game-changerâ€”in a game limited to 9 short, 2-turn rounds, getting two or three extra moves makes a big difference, especially in the final Generation when you're scrambling to marry off your 9 grandchildren and fulfill your Patron's secret goals. In fact, the actions you can perform with Favors are often better than the cards they pay for, which is sort of a problem. If nobody wants what you're selling, you keep the Family card for yourself, but this often feels like a consolation prize. If the prices of the cards weren't already set, this mechanism might work a little better, but as it is, most trades feel lopsided one way or another. Rather than encouraging players to barter and join in alliances of convenience, it promotes a kind of empty haggling.

It works better in a 3+ player game, where trailing players can swap trades to slow down the leader, but with 2 players, it doesn't do much for the game. The families themselves feel imbalanced, with Jolie (green) in particular able to rack up some ridiculous point combos if one player obtains most of their cards. Mansions, Titles and Missions are already direct scoring opportunities, and their respective families make them even betterâ€”there's one Jolie card that reduces the cost to purchase Titles for each Mansion you own, and other one that gives you a green action pawn, then a yellow action pawn when you spend it. Of the weaker families, Travaux is particularly redundant, focusing on ways to make money, which has typically lost its rarity by midgame. 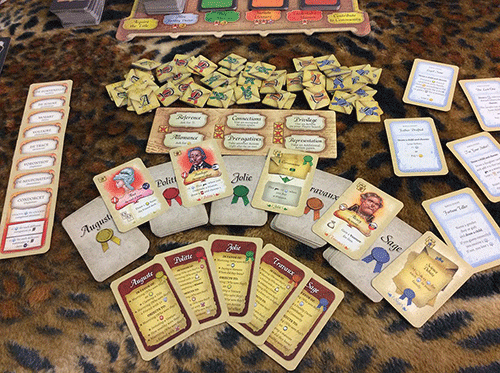 The Birth Events cards work out much better. These replace Complications with other choices, such as "Should I allow journalists to witness the birth?" or "Do I acknowledge this stranger's claim to be my long-lost relative?" Legacy is at its best when the players weave stories around their families, and the Birth Events add plenty of new wrinkles to the tale. The expansion also includes a mini-expansion for the solitaire Testament variant, adding another layer to the puzzle in the form of Great House cards that reward or penalize you for specific actions at certain times in the game. If you liked the old Testament, you may well like this, but I've always found the game mode lacking, and this didn't fix it for me. In fact, it just baffled me further: why include a solo expansion with this one if it ignores 100% of the other components in the box?

Finally, the 8 new Patron cards work just as well as the original set, suggesting new ways to build your family and explore the game. Actually, they work a lot better if you keep the Family cards in the box, pointing at the biggest flaw in this expansion. The Families are high-synergy decks focused on very specific actions and occupations. The fun of Legacy has always been about discovering combos in the Friend deck and figuring out how to play those off of your Patron, whereas the Families encourage the same strategies every game. The Patrons already existed to focus our strategies, and the Families do pretty much the same thing in a way that will either match or clash with your Patron'sâ€”neither of which is a good thing. They're redundant, adding complexity for no tangible benefit.