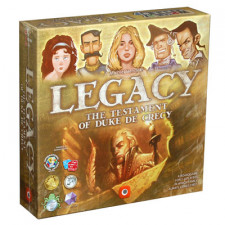 Everyone should own at least one game that doesnâ€™t involve mortal or financial peril. At least, thatâ€™s what I told myself when I bought Legacy: The Testament of Duke de Crecy, Michiel Justin Elliott Hendriksâ€™ Renaissance family-building game, and it turns out I picked the correct path to stray down, a highway filled with rich story, colorful characters and perhaps the most elusive gem of all: a theme that may make female non-gamers walk down the path with you.

One to four family heads begin with a few gold pieces and a smattering of friends, looking to leave their mark on French history over the course of the next four generations by shrewdly marrying, prolifically procreating and assiduously earning honor for their clan. Replete with cards, tokens and victory points, Legacy is very much a Euro, but it caught my eye because itâ€™s one with actual theme and the chance to weave my own tale. Typical Euro mechanisms abound, like the desire to take seventeen actions per round but only having enough tokens for three, the challenge of playing your cards in the correct order to maximize their benefit, and the ever-present passive-aggressive â€œOh, were you going to choose that action? So sorry. It seems as though Iâ€™ve just placed my token there, preventing you from doing so,â€ interaction common to the genre, but if you canâ€™t be aloof and quietly frustrated with your neighbor in 18th-Century France, where can you be?

Legacy further breaks convention because the publicly available (and thus blockable) actions make thematic sense. Can rival families prevent you from marrying? No, that happens on your own player card, but they can occupy the attention of the fertility doctor, producing more offspring than you, or take advantage of a business venture before youâ€™re able to, and all this adds to the narrative players create together. The Mayor of Paris can only reside in one family, and particular contributions to society bear a single surname on the bronze plaque adorning the attractionâ€™s wrought-iron gateway, as it should be. One generation in, Iâ€™m spending gold, gathering friends from which to choose suitable mates for my children and smiling at my growing family tree. Glower at me all you want from the shelves, Alpha Legion Space Marines, but Iâ€™m having fun and nobodyâ€™s dying in the process.

Speaking of mates, Legacy also offers a rare opportunity in a gamerâ€™s life: the chance to bring a significant other along on the journey. Billing it as â€œPride and Prejudice: the Gameâ€, I convinced my wife to join me at the table, and soon our competing families were jockeying for status and maximum social circumference, with the highlight of the night being my wife staring at her low suitor-to-child ratio and crying out, â€œHeaven help me, Iâ€™m going to have to socialize!â€ That single moment justified the gameâ€™s cost.

The story created by four competing families can fill an evening and a large table, each successive generation occupying exponentially more real estate. Itâ€™s a mild disappointment that strategic token placement is the only major player interaction; the opportunity to tweak the noses of, or even more seriously aggrieve, rival families would have made this an epic saga, but no such opportunities exist in Legacy, so players watch one anotherâ€™s moves, place their unique tokens quicker than their fellow Parisians, collect a publically-available friend thatâ€™s deemed appealing and otherwise keep to themselves. Once the final scores are tallied at the end of the third generation, including the children and arranged marriages of the fourth age group, players can peruse the table, celebrating a prestigious title or lamenting the grandsonâ€™s marriage to a sailorâ€™s daughter and weaving an antique tapestry together. This is the most prominent magic of Legacy, but not its only delight, for it offers an intriguing variant for solo players: the opportunity to build your family tree up from the bottom and discover who your ancestors were.

Separate cards used only for this, called the Testament Variant, provide hints for the curious 19th Century Frenchman/woman to find out who their family was, taking actions to build their tree upward and complete the mission-style cards they draw. This allows players to glance backward into an imaginary past instead of looking forward from their multiplayer rocking chair, providing a fresh thematic experience that connects to the soul of the game. Legacy: The Testament of Duke de Crecy was the road not traveled for me, and itâ€™s a journey Iâ€™ll remember for a long time.