Legend of the Five Rings entered my life with all the energy of a charging samurai army. It appeared at my local shop right as I was beginning to play card games and I fell in love. It was complex, there were 4 different ways to win, and people argued over their clans as if it wasnâ€™t just a card game. Eventually that energy ran out and the game disappeared from my store; not long after that AEG announced theyâ€™d sold the license. Well, Fantasy Flight Games has brought L5R back as an LCG and it may be the best card game Iâ€™ll never get to play.

A game of L5R is something very different to play than it is to behold. A casual observer might wander through a store and stop for second, drawn in by the bright colors of the various clans. Sitting across from each other are two opponents. Their eyes are locked in a steely gaze yet they donâ€™t seem to be doing much of anything. One of them will name a card, place it in their discard, and smile while the other sighs. The other will then move one of the many cards on the table forward only to see it moved backwards by the original player. This continues a few times before one of them smiles triumphantly, and yet another card is flipped 180 degrees. This, somehow, moves one of them closer to victory. To the casual observer, thereâ€™s a lot of messing with stuff. 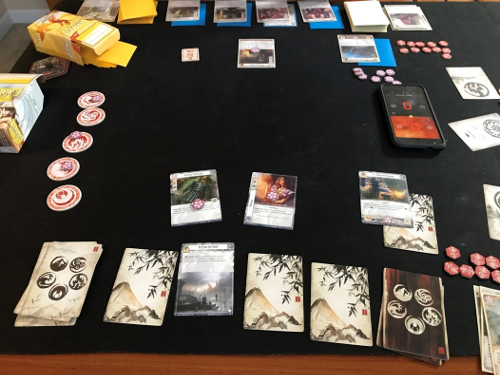 This is the BEGINNING of the game

But to the players? Itâ€™s war; brutal, unflinching, strategic war. Those sighs are the clarion call of dead heroes. Those cards moving back and forth are Bushi soldiers riding into battle only to be turned away when a Shugenja moves earth and fire to repel them. The card being flipped 180 degrees is the sight of one of your provinces being razed to the ground, your enemy now inexorably closer to assaulting the seat of your power: your stronghold.

Legend of the 5 Rings is undeniably complex. There are 2 separate decks to build and a suite of provinces to choose from. While the old Enlightenment victory condition is (unfortunately) absent, there are still 3 unique ways to win. Destroying your opponentâ€™s provinces and stronghold is the primary way to win right now, though I expect future expansions to flesh out the other two conditions. Those are focused around a resource called â€œHonorâ€. Through various actions players can raise or lower their own â€“ or their opponentâ€™s â€“ honor; reach 25 or drop your opponent to zero and you can claim victory.

The real complexity comes from the breadth of decisions. Like most card games, cards have a cost to bring them into play. In L5R, players can overpay for characters be placing more Fate â€“ the currency â€“ on them. This is a very simple mechanic with extreme repercussions because if you need a character to survive longer than 1 round you must place extra Fate on them. Deciding when to overpay for a character versus when to save your Fate for other characters or items is critical. The value of a character changes throughout the game in response to your opponentâ€™s board state and how close you are to victory. Do you put 2 or 3 into play and charge your opponentâ€™s stronghold, knowing that if you fail youâ€™ll have no one left on the board? Or do you supercharge a single champion, hedging against failure by ensuring your military might doesnâ€™t fade off the board.

These nuanced decisions litter this game like lotus petals in a trope-y pond. There is no default drawing mechanic in L5R. Each round you will bid your honor and draw cards equal to your bid knowing that if you bid more than your opponent youâ€™ll feed them honor. This has implications for both honor-based victory conditions while also lacing your strategy with a barbed trap. Youâ€™ll need those cards to win conflicts but you might be feeding your opponent the honor they need to win, or pushing yourself close to your own loss. 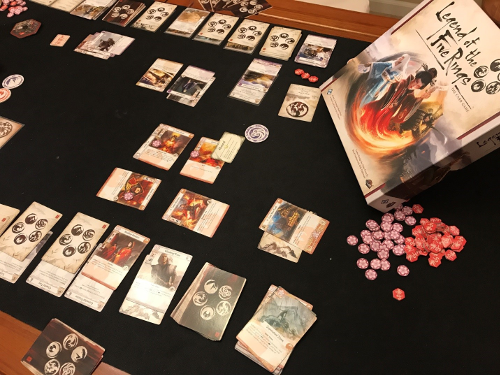 It may not seem like much, but this is the site of agonizing choices and crushing defeat

This creates a game that is extraordinarily rich. There are 7 clans to master and the Core Set is packed full of unique cards for each clan. There is a nuance to every decision that can only be learned with experience. This also makes it difficult to recommend. Five years ago I would have jumped in heard first, snapping up 3 core sets and appreciating that this is the friendliest Core Set FFG has made from a completionist standpoint. Unfortunately, I donâ€™t have the time to dedicate to learning this game. Extra unfortunately, the same things that make the core set friendly to completionists â€“ 1 copy of a large variety of cards â€“ make the â€œsingle core set experienceâ€ rather lackluster. There is little consistency to any given deck and the things that make each clan unique are diluted. Itâ€™s a little better if each player has their own core, but this is a game that will truly shine only with more cards.

This new edition of Legend of the 5 Rings showcases a truly great system, despite some deficiencies in the starter product. I have no doubt the tournament scene will be rich and highly competitive right from the get go. However, neither the product nor the system lends themselves to casual play in the way that Netrunnerâ€™s core set did. Streamlined, refined, yet no less exciting, this new edition will reward those who can find the time to sink into the world of Rokugan. I hope that one day I can join them.

Rafael Cordero posted on 10/20/2017 10:54 AM
Hi Ralph - thanks for the comment. You're absolutely right, it does read like a 4.5 star review with a caveat :) That's a more appropriate rating for the system. We've updated the rankings to include 2 ratings, one for the system and one for the core. Thanks for reading!!
Ralph Garner posted on 10/13/2017 10:35 AM
I don't get this review. It seems to be filled with enthusiastic, though guarded praise, but only gives 2.5 stars.

Yes, FFG's pattern of being stingy with their core sets, and L5R's history of not being a game one can casually pick up might knock off a star, but two and a half? I'd hate to see potential players who like deeper games give this a pass based on a quick scan of the ratings, and not the almost-glowing review.