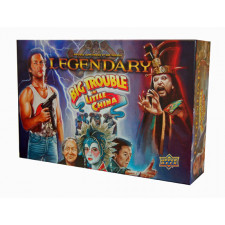 From the minute you roll into town, it's obvious that Legendary: Big Trouble in Little China's creators had to stretch things to make a big, standalone release out of this (relatively) little source material. It's as obvious as the box, sized like one of Legendary's "big" expansions rather than a core set. While this is more than sufficient to hold all the cards, the same can't be said for the game's eye-catching playmat, which must be folded like a burrito (bringing shame to its ancestors) to fit back inside. 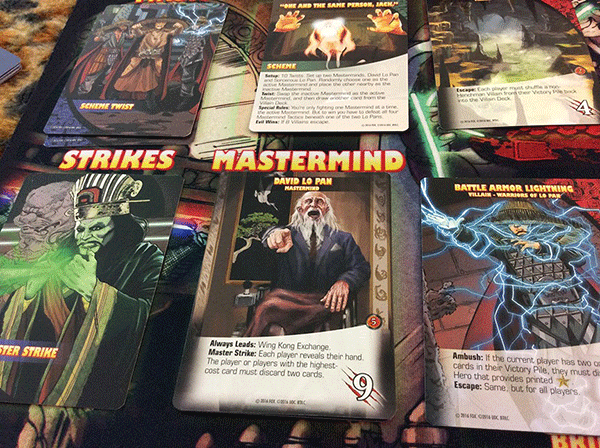 The sense that this IP wasn't quite ready for the tabletop runs deeper, however. This set includes only 9 playable heroes, 4 masterminds, 4 villain groups, and 3 henchmen groups, compared to Marvel Legendary's 15 heroes, 7 villain groups, and 4 henchmen. And even this reduced roster is padded with some B-listers. The main castâ€”Jack Burton, Wang Chi, Gracie Law, Egg Chen, Eddie and Lo Panâ€”are well represented, but then there are heroes like Margo the reporter, Henry Swanson (Jack's yuppie disguise for infiltrating the White Tiger brothel), and the Pork-Chop Express. Yes, Jack's truck is considered its own hero with a full 14-card deck. As cool as it is to plow through Wing Kong thugs and underground monsters with a meat-hauling semi, that's bottom-barrel material if I ever saw it.

The villains and masterminds suffer the same dilution effect. One villain group, the Wing Kong Exchange, is entirely invented, envisioning the kung fu fighting Three Storms in their day jobs on the group's board of directors. (It's also the best villain group, with Fight effects based on the Prisoner's Dilemma and one villain that can only be fought if you spent no recruit points for any reason that whole turn.) Half of the four masterminds are version of Lo Pan (which makes sense, given his schizophrenic nature), plus a high-ranking thug with two revolvers and no dialogue and the oft-mentioned but never shown demon, Ching Dai (really a third aspect of Lo Pan, representing his drive to kidnap and sacrifice).

For a game system predicated on variability, this small roster stings a bit when playing Big Trouble as a self-contained game. You're only leaving out 1 villain and 1 henchman group each time you play a standard 4-player game. At least the scheme variety is decent. "One and the Same Person, Jack" is the closest to the movie's plot, and has you fighting Lo Pan in both his geriatric and ancient ghost forms. Other schemes, like "Assassination," "Kidnap Uncle Chu" and "Enforce Villainous Hierarchy," are less closely related to the movie's plot, but still fun and creative. And, a series first, every scheme card has its own unique art.

One of the most surprising things about this set is that it introduces no new keywords. Like Lo Pan's immortality, this genericness is both a blessing and a curse. The general pattern for Legendary expansions is to introduce and exploit 3-4 new keywords, and the resulting rulesheet-checking can get out of hand when mixing heroes and villains from multiple expansions at once. By sticking to the basics, Big Trouble allows for more flexibility in card abilities while leaving itself accessible to new players. The cost is higher verbosity and lower complexity. This set also nixes the concept of team icons (Captain Britain will be disappointed). It's an inviting first stop for strangers, but Big Trouble's concepts won't shake the pillars of heaven for existing Legendary players. 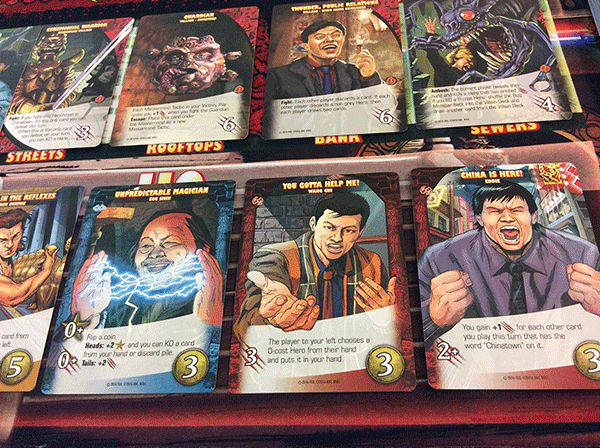 Even Big Trouble's attempts to shake things up lack impact. Mediocre heroes are just that. A watered-down version of Legendary Encounter's Role cards, these mildly improved starting cards could have been left off the table and nobody would miss them. Similarly, the concept of "Chinatown"â€”the two city spaces to the left of the Bridgeâ€”isn't exactly revolutionary, though it fits the set's theme nicely. Villains in the Sewers and Bank are bad, but when they hit Little China, things get personal for a lot of characters. Egg Chen's "Unpredictable Magician" card, which has different effects based on a coin-flip, is somewhere between underwhelming and obnoxious.

Which isn't to say that Big Trouble lacks good cards. The big theme is passive aggressive player interaction. Many new heroes offer you the chance to offload useless starting cards into someone else's deck. These cards offer high flexibility, equally useful for cooperation and low-key screwage. A typical one is Wang Chi's "You Gotta Help Me!", a low-cost, high-attack card that forces the next player to hand you one of their 0-cost cards. It's good enough when played competititively, but when the stakes are high, it can save the day, allowing players to work together to defeat tough villains or outsmart certain schemes. Miao Yin's "So This Is America" is one of the best cards in the set: a 2-cost card that can offer up to 4 recruit points if you trigger its class ability and hand it off to another player, perfect for scooping up those high-cost rare cards faster than ever beforeâ€”at the cost of allowing someone else to do the same.

There's nothing bad about this set, and it's probably the best place to start if you want to pick up a Legendary base game. It plays very nicely with Marvel Legendary if you don't mind mixing universes (Wang Chi and Secret Wars' Chang-Shi make a great Double Dragon team), but its impact is more like one hand clapping than a 6.9 on the Richter scale.