Critical Misses: Pretty much just another version of Legendary; disappointing use of the Buffyverse license; bad art.

To say I've seen a few episodes of Buffy: The Vampire Slayer would be a massive understatement. The iconic TV show with its precocious teens and overly snarky dialogue amuses me now as much as it did 20 years ago. Needless to say, a game including one of my favorite IPs and one of my favorite mechanisms, deckbuilding, was sure to grab my attention. Unfortunately, Legendary: Buffy plays out more like the cringe-worthy â€œBeer Badâ€ episode than the amazing â€œHushâ€.

Legendary: Buffy uses the same blueprint as other Legendary (not Legendary Encounters) games. Players recruit heroes into their deck, fight the conveyor belt of villains that spawn each turn, and eventually build up to enough attack to take on the Big Bad. As a cooperative game, players win when the Big Bad has been defeated a specified number of times or lose if the Big Badâ€™s scheme comes to fruition via a specified number of scheme cards. For those of you like a little competition in your cooperative game, you can compare victory point piles at the end of the game to see who the biggest hero was. The only addition to this Legendary formula in Buffy is the doom barometer, also known as the Light/Dark track. If the track goes too far into the dark, thereâ€™s a negative effect determined by the Big Bad in play. However, push enough into the light and everyone gets a courage token that you can cash in later for a +1 recruitment or attack point. All of this sounds more interesting than it plays out. 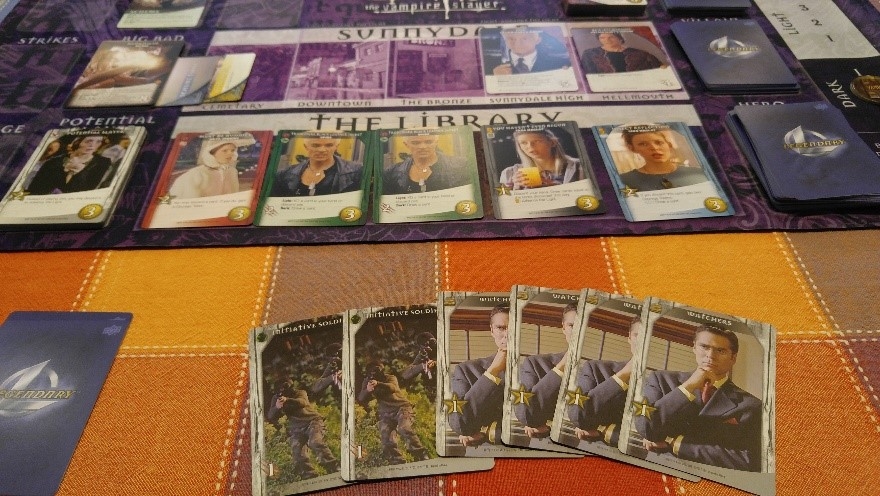 Wesley always was a handful.

One of my biggest issues with the structure of the game is the hero row. There are five cards in the library that you can purchase. This sounds fine until you have a combination of cards sitting out because they are too expensive and/or uninteresting. I wish I could stake some of them and turn them to dust. You could let a villain escape in order to KO (i.e., remove) a hero, but that seems like a poor option given that it causes the dark to increase. There is no gradual ramp-up to the game as your deck gets bigger and your combos get stronger. Youâ€™re supposed to select cards that trigger special abilities when they shared icons. However, with five hero class icons and five team icons, making a concerted effort to build a combo-tastic deck is difficult, especially once you factor in the random array of heroes. I can accept the randomness of card draws when I feel like I have choices. Instead, this feels like youâ€™re trying to figure out which end of Mr. Pointy to stake the vamp with.

On top of this stagnant row issue is the deck of Potential Slayers â€“ a 3-cost card that gains you 2 recruitment points. Getting slightly better versions of your starting deck cards is standard in a deckbuilding game, but there is no upgraded attack card equivalent. Potential Slayers easily could have had an option of providing recruitment or attack. Too often you get stuck with a row of heroes that potentially have no attack and a deck of cards too weak to sometimes even defeat the puny henchmen in the villain row let alone the Big Bad. Rather, the potential slayers have the ability to be discarded (I guess theyâ€™re disposable?) to increase the light. Though seemingly useful, it isnâ€™t as handy as you might think given how the Light/Dark track fits into the game.

I was onboard with the idea of this track until it ended up being a cursory part of the game. Some cards do things based on where the darkness track is, but those abilities arenâ€™t reliably available to make the track feel truly integrated in the gameplay. The track could have made Legendary: Buffy stand out from its predecessor. Moreover, although the show was absolutely about the struggle between good and evil, it was more about the relationships. In a cooperative game, this is hardly present outside of winning or losing together. Coordination during turns is minimal and conversation can do little when you simply donâ€™t have enough recruitment or attack to do anything. 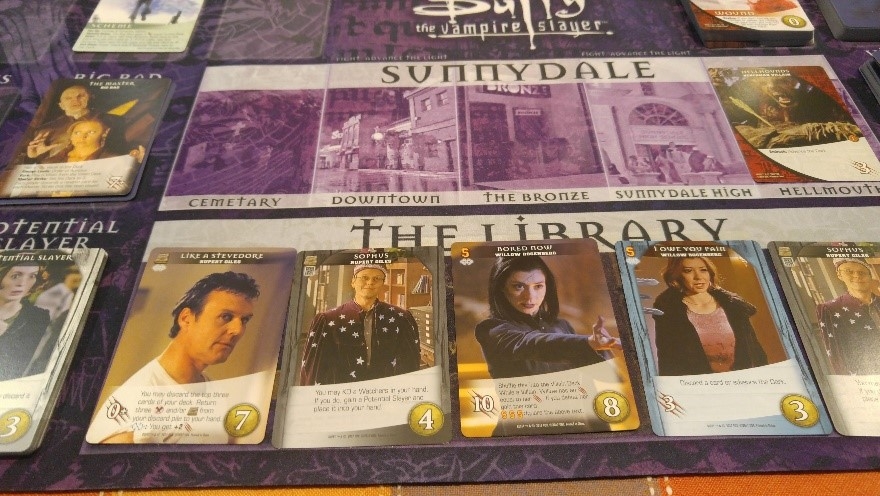 Willow is very upset at the cemetery typo printed on the playmat.

Lastly, I have to comment on the art. The episode stills on the cards provide a fun trip down memory lane. The line about The Master having â€œfruit punch mouthâ€ never gets old and seeing the card titled â€œBored Nowâ€ reminds you how much of a scary badass Evil Willow was. These images also remind you of the cheap special effects or cheesy villains. More stylized art could have celebrated the awesome characters and fights to save the world instead of showcasing The WBâ€™s budgetary constraints. I can normally overlook aesthetics, but the art really pulled me out of the Buffyverse and highlighted how lackluster the gameplay was.

As a huge Buffy fan, I was really hoping for something more than a Legendary: Marvel reskin. There were few touches of real Buffy flavor in the game. The Big Badsâ€™ abilities barely had any unique flair. Characters are thematic if you squint really hard. Even the hero and team icons didnâ€™t change from the ones present in Legendary: Marvel. I assume this is so you can combine games, but honestly, was someone hoping for a Hulk and Anya team-up? This makes the whole experience feel like a disservice to the IP. Perhaps some Buffy super-fans could pick this up and enjoy the theme while ignoring the problematic gameplay. However, if I want to experience all the great characters and moments from the show, my hours are better spent re-watching the whole series for the umpteenth time. At least then I know Iâ€™ll be entertained.