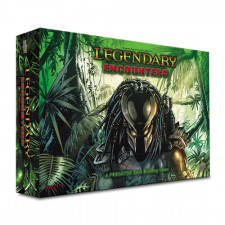 It was my destiny to love Legendary Encounters: Alien. The only thing I love more than deck-building is cooperative games, and Encounters had both; it didn't hurt that Ridley Scott's Alien is one of my favorite movies. Even so, the game exceeded my expectations with its smart designâ€”an objective-based system simple enough to learn in minutes but flexible enough to ambush you with genuinely unexpected twistsâ€”and its on-point reference game, conjuring up the four movies' most memorable scenes, shots and quotes in a way guaranteed to make fans weak at the knees with nostalgia.

For this very reason, Legendary Encounters: Predator was a sort of proving ground for me. Before playing the game, I hadn't even sat through the first Predator from start to finish. (Don't worry, I've since rectified my sci-fi illiteracy.) Was the Encounters system strong enough to hook players who aren't already enamored of the source material?

Shortly put, yes: Predator absolutely confirmed my faith in the underlying system. While familiarity with the source material enriches the experience tenfold, Legendary Encounters: Predator is another clever, surprising and full-featured deck-builder, even when played in a cultural vacuum.

This is another base set, so you don't need to own any other Legendary products to play (though it's fully compatible with Alien and somewhat with Marvel Legendary), and it expands the series in some intriguing new directions. The biggest change is that, while Alien contained 4 complete scenarios following the 4 movies, Predator only packs in 2 new cooperative scenarios, one for each of the pre-AVP films. The other half of the set is dedicated to an entirely new, "fully competitive" play mode that revisits these 2 movies from the predators' point of view.

While they're more familiar, the two cooperative scenarios are still meaningful additions to the series. As in Alien, each scenario has its own Barracks deck made up of 4 characters from the film, plus a three-stage Encounter deck and Location card. Also as in Alien, each movie focuses on a new keyword for its Barracks cards, which can be "recruited" into the players' decks. Predator's roster of Dutch, Dillon, Mac and Blain emphasizes the "Brothers in Arms" keyword, which gives you a bonus that increases with each differently named character you play in a turn. Predator 2 introduces the flip side, Showboat, which scales to the cards you've played belonging to the same character. Both give you new synergies to pursue beyond the familiar Class and Crew icons.

The game also continues to support the Coordinate keyword, which lets you give a "virtual copy" of a card to a teammate on their turn. In fact, two of the best new cards make elegant use of Coordinate: Mac's "Gonna Cut Your Name Into Him!" and Harrigan's "The Speech." Their effects are small (draw a card or +1 attack), but they're cheap and plentiful. The real value in that is the new "Call for Backup" keyword that appears on the new cooperative Role cards. In Alien, these cards just gave you a small ability and a free draw; here, they give you +2 attack or recruit and a "Call for Backup" ability that activates once for each player who Coordinated with you this turn. This is just one of several steps Upper Deck has taken to address the original Encounters' difficulty imbalance. It's still easier with fewer players than with more, but effects like these give larger groups a break now and then.

The co-op Encounter decks bring their share of surprises. Each final Encounter now has two ways to win: either defeat the Final Enemy ("One [Big] Ugly Mother...") for ultimate glory or use the alternate win method for a minor victory. (In the first movie, this means escaping via "The Choppa!", while the second lets you play Russian Roulette with your deck in an all-stakes duel.) More significantly, both scenarios turn the Hazard cards into Marks, which get attached to a player's Avatar and make them the target of nasty random effects later on. You've also got some clever objective design and diabolical new effects on the Young Blood (Drone) cards; my personal favorite is "Over Here!", which gives you a wound when you Scan it...then flips facedown again, initiating a bloody little memory game with the shifting Wilds.

But the most game-changing feature is the new competitive play mode. This is an entirely separate game, with its own decks for everythingâ€”the only cards that overlap with cooperative are the starting deck. "Fully competitive" is a bit of a fudge; you're still fighting cards in the Encounter decks, but now you're claiming them as Trophies for their Honor (VP) value, as in Marvel Legendary. In fact, the two competitive scenarios are perfectly playable in co-op mode, too, and offer a hefty challenge on their own. In other words, diehard co-op fans like me needn't worry about getting only "half a game" if they buy this set.

What makes this more competitive than Marvel is the Duel keyword that's all over the Predator cards. Every card you play with this keyword lets you divert some of your attack toward the other players, forcing them to draw Strikes from the new deck exclusive to this mode. These new Strike cards can either cause physical damage or dishonor, which leads to a new approach to healing: instead of healing entire Strikes at once, Predator cards might give you a few points of Heal or Restore; you can only get rid of a Strike if you've generated enough Heal to cover all its damage or enough Restore to cover its dishonor. While you can win by killing the Ultimate Prey, it's just as likely the game will end because one Predator took down another, claiming the hunter itself as a Trophy.

The Predator cards are all great, especially the Killer Instinct cards that replace Sergeants, so it sucks that they're not really compatible with co-op mode: you either play all-human or all-hunter. The scenarios themselves, as mentioned, are very cross-compatible (yes, you can hunt Xenomorphs as Predators if you own Alien) and just as good as the co-op ones, especially with new concepts like the Gear Up cards, which equips a Prey with a random extra ability from the Gear deck, and the Trap cards, which attach to a player and provide a debilitating effect until they're disarmed by paying recruit points.