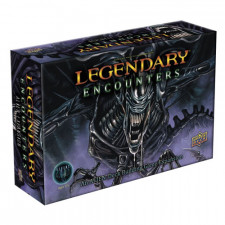 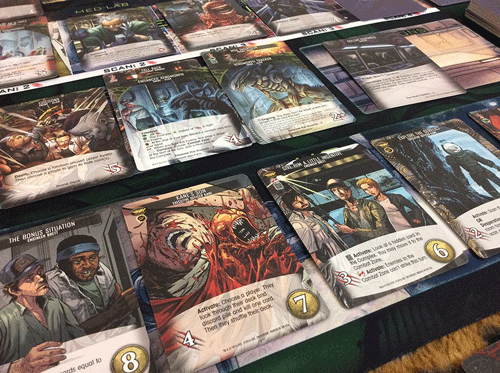 The art is just as sharp and gory as the base set, a huge relief after the Firefly fiasco.

Thankfully, this expansion is nearer executed nearly flawlessly; itâ€™s Aliens, not Alien: Resurrection. With the exception of some balance-maintaining duplicate strike cards, these 400 cards have are filler-free, expanding every part of the game with two new scenarios, nine character decks, ten avatars, difficulty modifiers, new drones and strikes, and a new antagonistic play mode where one player takes control of the Queen Mother and tries to live up to the title of "biggest bitch in the universe."

They could have chosen a lot of directions for the new scenarios. Many players expected a Prometheus scenario, one exploring some non-cinematic entries in the Alien franchise, or alternative objectives for the original films focusing on previously overlooked setpieces. Instead, we get two completely original stories. Alien Incursion takes place in The Aviary, a futuristic mega-zoo collecting the known universeâ€™s winged fauna. Facehuggers impregnate some flying cows, and soon winged xenomorphs are recreating Jurassic Park III's pterodactyl scene. Alien Evolved instead revisits Resurrection's premise. In the top-secret Science Station Echidna, the mad Dr. Typhon is conducting unethical genetic experiments, intentionally breeding collared xenomophs with genetically enhanced clones to create augmented, obedient super-aliens.

Itâ€™s decidedly pulpy material, more reminiscent of a toy line or comic book spinoff than any film. On the other hand, these are two of the best scenarios in the game, proving that Legendary Encountersâ€™ narrative elements work even without nostalgia driving them. The subtle Flying keyword allows enemies to glide inexorably forward, independent of the state of the complex. Incursion's other elements are more dramatic, including an objective that lets you slam a security door over the enemies, absorbing their strikes until they finally break through, and hazards that hamstring your deck-building efficiency by removing Sergeants from play and forcing you to rescue (recruit) the fleeing tourists. Evolved's Enhanced keyword is a lot more fun: when revealed, these enemies get a random enhancement by attaching the top card of the Barracks. Itâ€™s similar to how Gear worked in the Predator set but doesnâ€™t require a whole deck of cards to implement. The new avatars go with the new scenarios: five space-zoo personnel with interesting abilities, and five clones who are simply very good at a single thing if you can get the right class trigger.

The best thing thing this set does, though, is bring back the underutilized Facehugger/Chestburster mechanic from the original. Facehuggers and egg clutches appear in both scenarios, one late-game hazard gives a player a chestburster directly, and an evil new strike card, Slow Gestation, cycles through a playerâ€™s deck until your allies can no longer avert it (by revealing a survival-class card), at which point you get a chestburster, bub. The new drones also help tie the movies together, copying mechanics that previously appeared only in specific objectives, ensuring the best ideas arenâ€™t consigned to a single scenario. 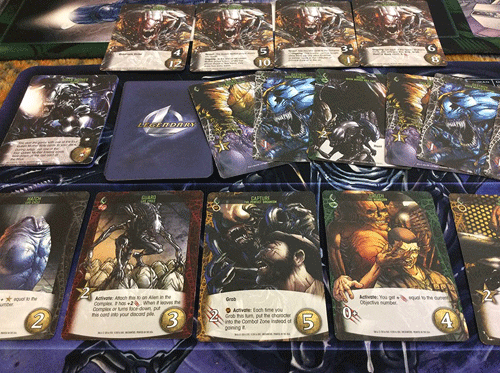 The Queen Mother's Nest cards, based on the four movies' Final Enemies, gives UDE's artists an excuse to draw more of these iconic monsters.

Luckily, the game provides a couple of new ways to kill unwanted cards, notably the high-rarity Kane's Son. The new character cards donâ€™t go with the new scenarios, which require you to build a custom, mixed Barracks deck (which you should have been doing already). Instead, the expansion introduces two additional, iconic characters from each film: Kane and Brett, Drake and Gorman, Morse and Andrews, Elgyn and Vriess, and a new Ripley that belongs to all four crews. Mostly, these donâ€™t recycle the keywords from the original sets (except the new Ripley, who uses all the previously movie-specific keywords), but they work well with their designated crews and feel unique. The biggest new keyword is Desperation, which gives an okay card a great ability under specific, horrible circumstances. Mostly, these cards just add variety and bring fan-favorite characters into the fold.

My only complaint with the original game was that it became too easy at lower player counts. This was easily fixed with house rules, but now you can enjoy a harder game with two official difficulty enhancements. The expansion includes Hard Mode replacements for every location and objective in the base game, plus the two new ones. A more flexible approach is the Soldiers, which are essentially drones that make the game harder, not easier, acting like minibosses for each objective. These difficulty enhancements do the trick (not like the new scenarios need them).

Finally, Queen Mother mode gives one player the chance to play as the alien adversary, with her own starting deck and Nest (Barracks) to recruit from. As with previous attempts to turn Legendary Encounters into a competitive game, itâ€™s not something I plan on using very often, but it works well for an occassional, alternative play mode. Unlike the original Alien player cards, the Queen Mother doesnâ€™t feel over- or under-powered, requiring specific keywords to â€œunlockâ€ the ability to attack players directly, but she definitely feels like a part of the game. Aside from direct attacks, she can Hunt, forcing players to discard cards of her choosing; Rush, accelerating the Hive deck; and my favorite, Grab a character from HQ, cocoon it in her deck, and later play it into the combat zone as a newly spawned alien. To win, the human players must survive the entire Hive deck and kill the Queen Mother Enemy card at the very bottom.

With killer art and no filler, Legendary Encounters: Alien expansion is an ideal deck-building expansion. The perfect organism....