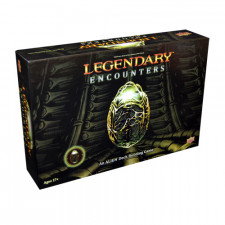 It's in the nameâ€”this is the kind of game you only encounter once in a blue moon. A game with such a ridiculously high value-cost ratio that it might as well have been beamed down by beneficent beings from a superior star. A game that inspires real, raw emotions beyond the flush of victory or the pall of defeat. A highly evolved, possibly perfect organism.

Legendary Encounters: An Alien Deck Building Game is Upper Deck's fully cooperative adaptation of their popular semi-cooperative Marvel superhero deck-building system, Legendary. In addition to several significant alterations to the parent system's DNA, Legendary Encounters goes where no Legendary game has gone before: the terrifying vacuum of space as depicted in the Alien film series conceived by Ridley Scott, James Cameron and others who have embellished upon the core values of the first two films to varying degrees of success.

As in other Legendary games, players will build decks during the game by recruiting cards depicting well-known charactersâ€”in this case, people like the Nostromo's Captain Dallas, the Sulaco's android officer Bishop, Fury 161's Francis "85" Aaron (it's his IQ), the Betty's mercs Johner and Call, and of course a Ripley for each of the four films. Each character has its own mini-deck of cards in various rarities, their titles, illustrations and abilities recalling famous moments from the films, from Private Hudson's "This ain't happening, man!" to Sister Ripley's ultimate sacrifice. In addition to special abilities, each card provides one (or both) of two resources: Recruit Points to recruit more characters or Attack Points to kill aliens.

Oh yes, the aliens. The xenomorphs and other baddies come from a separate deck called the Hive. They enter play in the Ventilation Shafts, one of five rooms that make up a play area called "the Complex." At this point, the card is just a blip on your radarâ€”to actually find out what it is, you'll need to scan the room by paying some Attack points. The closer the enemy gets, the easier it is to scan, but do you really want to wait until it's right on top of you?

Each room in the Complex can only hold one card at a time. When a new card needs to enter a room, it pushes any existing cards to the left until, eventually, enemies are pushed out of the Complex and enter the Combat Zone. This is when things get real: for every enemy in this area at the end of your turn, you have to draw a Strike. These Strike cards can deal anywhere from 0 to 5 damage, and some of them have other, more insidious results; this range of outcomes means that there's always a chance the next Strike you draw will be your last.

There are many ways to die in space. If you find a Facehugger humping your face, you only have a short amount of time to kill it before it impregnates your deck with a Chestburster card. The moment you draw the Chestburster, you suffer extreme pain and die, though you might come back as an alien player if you're using that optional variant.

Exactly how much of a beating each player can take depends on their Avatar. At the start of the game, each player receives an Avatar and shuffles the corresponding Role Card into their starting deck. Each Role Card has a different effect, giving that player a unique identity from very first round: the Gunner produces Attack, the Medic heals Strikes, and the Researcher just draws a big old hand of cards.

In addition to their base effect, the Role Cards each have a Class Icon. As in Legendary, certain powerful abilities on cards only unlock if you've played the matching Class Icon or Crew Icon earlier in the turn. Carefully balancing this icon-matching game with consideration of the cards' Attack and Recruit values and special abilities gives the deck-building in Legendary Encounters a nice bit of crunch, but it's also accessible enough to appeal to more casual gamers.

It's this delectable blend of depth and accessibility, ultimately, that makes Legendary Encounters a five-star game. If you've played a deck-builder before, you can start playing almost immediately. However, as you progress through the preconstructed Hive and Barracks decks corresponding to each movie (with impeccable hand-drawn illustrations capturing the moments you know and love), the game does something seldom found in tabletop games: it will surprise you, again and again. The cards themselves introduce variations you wouldn't have thought possible within the confines of the game system, but they do so using well-phrased lines of brief text; there's no Magic: The Gathering keyword overload here.

Many times, you'll encounter an objective you have no clue how to complete, an enemy you can't possibly defeat. The answers will reveal themselves in time, and when they do, it will feel like a eureka moment. The storytelling in this game works so well that I won't hesitate to purchase any future Legendary Encounters product Upper Deck chooses to release, including the upcoming Predator-themed standalone game (AVP fans: it's fully compatible with this set). Legendary Encounters: Twilight? Whatever. Legendary Encounters: Superman 64? Sure. Legendary Encounters: Monopoly? If it uses this game system, I'll sure as heck recruit those collie dogs and top hats to blast the hell out of Park Place.

Given the quality on display, this game is crazy generous with its quantity. The four films give you four complete, replayable scenarios, and the joy of discovering each one for the first time is well worth the sticker price. You can also mix and match objectives, locations, and crew for tens of thousands of additional combinations. While it loses some thematic wow factor, a randomized game really brings the system alive, highlighting new interactions between cards and new ways to tackle objectives. As though they hadn't already stuffed four games' worth of content into the box, Upper Deck included another set of components for two optional variants: one hidden traitor mode where a player might be working for "The Company," and the alien player variant described above (which includes its own deck of alien cards and Avatars).

Yes, the cards need a lot of presorting before you can start playing, the difficulty needs some tweaking depending on player count, and the card quality itself could be better. But dwelling on the negligible negatives is like complaining about some smeared frosting on the most delicious cake ever baked. Buy it. Play it. Thank me later.