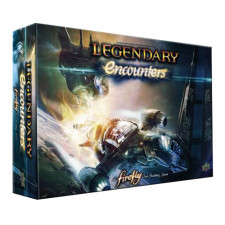 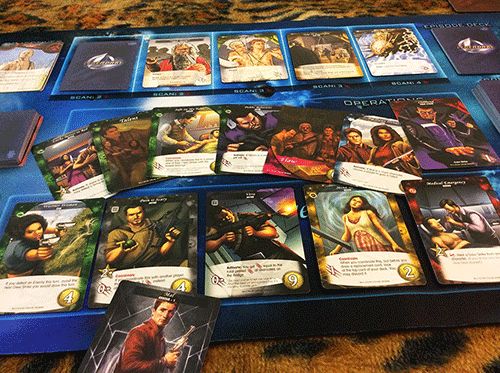 Legendary Encounters: Firefly is the latest in Upper Deck's line of fully cooperative deckbuilding games. But as the first Encounters game based on a TV series, it represents unbroken ground, and the changes this brings make it as much a departure from Legendary Encounters: Alien as that game was from its Marvel predecessor. It's a lot like life on the rim: spirited ingenuity frequently tarnished by ugly reality.

Firefly is a character-driven, adventuresome space western about pulling off elaborate heists and living hand-to-mouth under the long shadow of the Alliance. Each game takes you through three consecutive episodes, which can link together all fancy-like into a 15-episode campaign. Each episode has some objectives, though the means to achieve them are only revealed during play. Completing objectives earns you credits, which can be spent between episodes to patch up your crew, repair your ship, or buy upgrades that might make the next episode a little easier. Unlike the previous two Encounters games, it's never overly easy. Just like the show, you'll need to do the job smooth or stay grounded.

The episodic nature necessitated a revision to the game's pacing. Before, cards from the Encounter deck (now the Episode deck) would flow seamlessly from one objective to the next, and the only real goal was progressing far enough to kill the end boss. Now, each episode has its own mini-boss, and an Inevitable card keeps the episodes separating, wrapping things up nicer than a wipe to the credits. When an episode ends, succeed or fail, the current episode's cards get sent to the black, the players get a short Inter-Mission to spend credits as described above, and only then does the next episode begin with a cold open, crisis in flagrante delicto and some cards already in the 'Verse.

You might expect that this makes the game feel segmented and schizophrenic, but it's actually cleverer than our favorite kid sister. These in-game breaks allow Firefly to recalibrate the dual engines of Episode deck and deck-building and keep things sporting. It also leads to shiny risk-reward calculations when you get a shot to end the episode early. Rushing headlong into the next danger doesn't always work out like it does in the show.

Another significant change is the way in which Upper Deck handled the concept of a "returning cast." Instead of a prebuilt crew deck for each scenario, Firefly provides both avatars and recruitable cards for 9 characters. Each game, players choose 5 castmembers to be Main Characters, and the other 4 supporting characters make up the recruitment pool as "supporting characters."

Without a scenario-specific focus, though, Firefly's crew decks lack any sort of theme or differentiating twist and are just overall lacking in exciting card interactions. Class-triggered abilities (rewards for playing cards of the same color) are disappointingly rare, with a goodly portion of the cards instead locking abilities behind an "If such-and-such's a Main Character" wall. Even more cards don't care what you play or when or who's in the game. 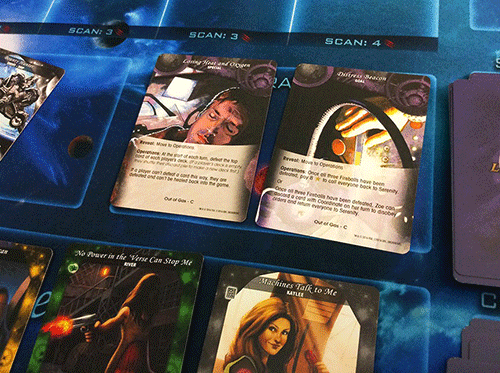 (The card game's episodes are as varied and memorable as those in the show's short season.)

The Episode deck, conversely, is better than anything the other two Encounters brought, though there are some recycled concepts. Not just harder, the objectives and episodes here are just generally more interesting. Serenity (part 2) has you taking out Patience's bandits before they can form a posse, while Out of Gas kills players slowly, making them lose random cards from their decks each turn. Safe, meanwhile, has players burning their hands putting out a growing fire, Trash is a high-speed caper with many moving parts that demands utmost precision, and Objects In Space is just as weird as the episode it's based on.

On the downside, since every episode has a big bad, where they land in the shuffle weighs heavily on the objective's difficulty. Especially in the "A" episodes, scanning the wrong card early is like signing your own death warrant.

It's Firefly's character focus that stands out the most. The first Encounters introduced Avatars, roles the players inhabit with unique abilities. Here, rather than a Role card, Main Characters get a Talent and a Flaw. Talents are powerful, character-specific effects that are defeated (removed from your deck) when activated, while Flaws are negative effects that must be played immediately (similar to Alien's chestburster cards). Talents and Flaws flow awful freely in these episodes, so your choice of Avatar is a lot more than just a pretty face. These effects are generally balanced and evocative. For instance, Jayne's Talent makes him an excellent fighter, but his Flaw turns his temper on his crewmates. River has a natural affinity for just about everything and can trigger class abilities with her Talent, but her Flaw is one of the worst: she puts folk on edge, giving them more Flaws.

References to the episode's Main Characters are also frequent on both Crew and Episode cards. For instance, when Jayne defeats one of Patience's snipers, he can also kill one of her regular bandits. Wash's "Crazy Ivan" generates 3 attack normally but can also be used to avoid a ship strike if Kaylee's on the crew.

These touches uncover memories for series fans, and the pre-game strategy in picking the right mix of crew for the job makes up a little for the actual cards' blandness. At the same time, it's mighty kludgey. It's like your reg couple, a part so specialized that it only seems to gum up the works.

Firefly's greatest weakness is that it's so ruttin' unique. Well, that and it's so powerful uglyâ€”Upper Deck lowered their standards significantly when they commissioned this fei fei de pi yan, though the Episode cards look a sight better than the crew. The concepts of ship upgrades, credits, talents, flaws, and main characters have no analogue in the other Encounters sets, and there are no rules provided for integrating them. Does that seem right to you?