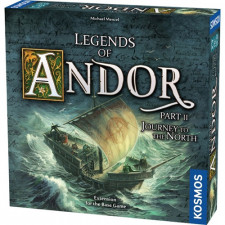 Legends of Andor: Journey to the North Expansion Review

Avast there, me hearties. Listen well, and I'll sing ye of four heroes from the South who, with nothing but a single-masted old sloop, returned balance to the warring forces of the sea and saved the warring sorcerors of Hadria from themselves. It's a tale of rampaging sea monsters, ravaging storms, enigmatic giants, and blistering blizzards. As sea shanties go, it's got everything but the grog. 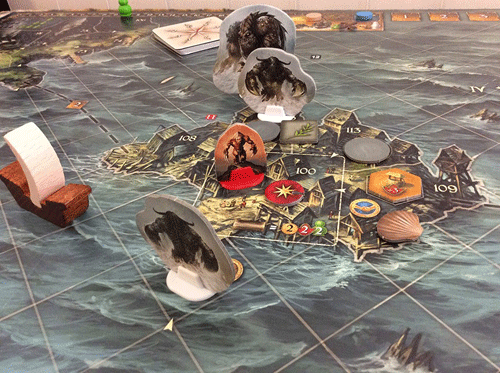 In Journey to the North, you have four capital cities to defend from oceanic onslaught.

As an expansion, Journey to the North is a big deal. Although this first major expansion to Legends of Andor brings the heroes to exotic new locales, facing all-new challenges on a new double-sided game board, it hasn't compromised on its core principles: fully integrated, gameplay-driven tutorials and a calculated approach to combat that divided players of the original. Journey to the North mends this system's flaws without abandoning what made it unique. Setup is more variable, combat is more foregrounded, but these feel like natural evolutions of the system, not concessions to disgruntled "fans." The series has left the comfort of home port, but it hasn't lost its way.

More importantly for American Andor fans, who saw the game all but abandoned under its original Fantasy Flight license, this existence of four new, replayable Legends is something to celebrate, even as this set's improved world-building leaves you wanting even more.

The greater part of the expansion takes place on the "North" game board, which depicts the sea dividing Andor from icy Hadria, land of sorcerers. The advantages of this new game board are apparent immediately. The base game had the heroes defending Castle Andor, which acted like a giant drain for all of the kingdom's monsters, with an instant loss once a certain number of creatures had breached its walls. Journey to the North's loss condition is more dynamic: now, the heroes must protect the four islands and their capitals from simultaneous Godzilla-like assaults by the irate denizens of the deep. This "divide and conquer" approach simplifies creature movement; no more scanning 80+ non-sequential board spaces for the smallest number. 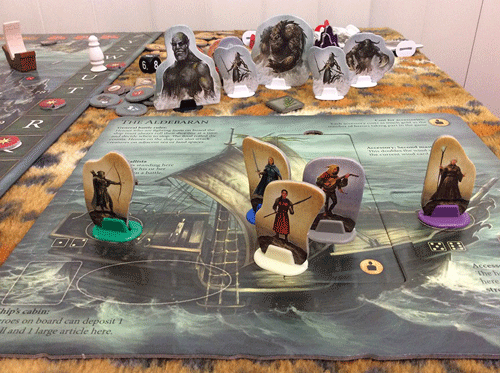 The Aldebaran ship board gives the expansion a unique feel.

The heroes' ship, the Aldebaran, is Journey to the North's defining feature. Luckily, the expansion nails the nautical atmosphere. Aboard the Aldebaran, hero figures reside on the ship board, from which they can control the wooden sailing sheeple and engage in nautical combat. At the start of the round, you turn over a wind card that shows how many spaces you can move the ship in each cardinal direction at a cost of one hour. Because everybody moves together, often 2-6 spaces at a time, crossing the board is much faster now, allowing for more diverse, spread-out challenges. At the same time, rocky crags and coastlines make the navigational decisions satisfyingly thinky. The ship can also be outfitted with extra sails and weaponry, and since these purchases benefit the entire team, it's often smarter to spend your gold on that than the traditional strength points or personal articles. Fair warning, though: if you have a problem with so-called "alpha" or "quarterback" players in your co-op games, this expansion's emphasis on teamwork will only exacerbate that.

The final big change is the new Fame track, which extends the metaphor created by the base game's "Narrator"-driven time limit. A green pawn, the "Bard," is moved forward on the track as the heroes accomplish great deeds, viz. killing monsters or completing fetch quests for the islands' capital cities. Then, at Sunrise, the rampaging sea beasties force the Fame track back down: peasants won't be singing praises of your exploits when they're being crushed by a sea troll's pincer. Slaying monsters pushes the Narrator forward at a reduced pace, which is good since combat is now such a necessity, and the fact that you must now forego some of your rewards (previously gold or willpower) for Fame keeps the battles tense.

Like the Andor base game, Journey to the North is lavishly, some might say excessively, produced. Designer Michael Menzel is well-versed in the art of graphic design, having illustrated such classics as Stone Age, Thebes, and Bruges. He knows about making games both gorgeous and functional, and Andor is in many ways a case study in this philosophy. Every game piece visually reinforces its own purpose without breaking immersion.

But this time, the amount of stuff in the box verges on wasteful. Once again, there's only a single Legend utilizing the reverse of the game board, and there are several fully illustrated, unique characters that are never used (they're intended to be used in "custom Legends").

Journey to the North introduces one new hero, a "sea warrior" who gets to tweak the ship's movement a bit each turn, but don't get too excited. Stinner/Stianna replaces the dwarf Kram, so much of a landlubber he's earned the nickname "King Under the Mountain," so you're not actually getting additional choices. 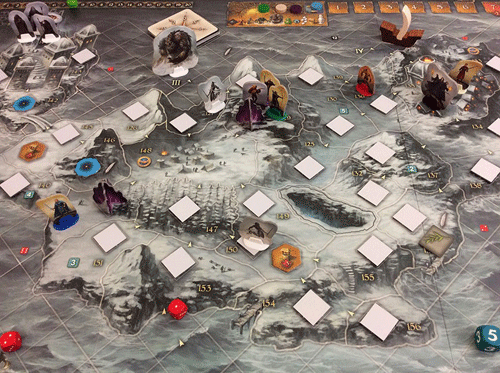 Caption: The Hadria side of the board has its own unique challenges.

The new Legends are narratively and mechanically richer than in the original. The "tutorial" legend has some real meat on its bones now, Legend 9 mimics Legend 3 in its variability, and Legend 10, set in snowy Hadria, isn't quite as epic as the base game's dragon fight, but it's a lot better than the anomalous mine scenario, featuring new mechanics with the snow tiles and one major, binary decision that gives the heroes access to two unique pools of legendary items. Only Legend 8 feels like filler, but even that filler is replayable.

If you hated Andor's calculated approach to combat, you might like this expansion's altered pacing, while the collaborative ship movement replicates the thinky/puzzley atmosphere. If your biggest complaint about Andor was that there just wasn't enough of it, get on the first ship going north, because the Journey to the North is one hell of a ride.