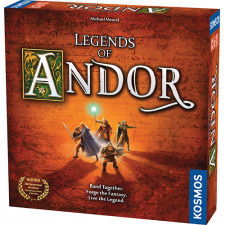 Legends of Andor first showed up in the US a few years ago under the Fantasy Flight Games imprint and it is has returned as part of Thames-Kosmosâ€™ stable of English releases. This is good news because it is a unusual adventure game that isnâ€™t quite like anything else out there and its format- although somewhat restrictive- is quite smart. The standard â€œfantasy heroes versus a rising tide of eveelâ€ trope may not win over any converts, but accessible gameplay and a just-right challenge level make it a compelling co-op with a few meaningful differentiators.

Out of the gate, this game does things differently. There is a quick-start rulebook (really a two-pager) to get the game set up, but from there you play out the first of five scenarios almost as a guided tour. Everything is directed by cards and tiles so there isnâ€™t a whole lot of room for error. Itâ€™s a neat concept, because you literally learn to play as you play and youâ€™ll rarely find yourself, at least in the early stages, even needing the brief reference guide that lays out some particulars of the rules in a more traditional fashion. The training wheels donâ€™t come completely off in the second scenario, which is more open-ended and offers some more variety. Beyond legend two, the complexity level increases but never so much that the players feel overwhelmed or bogged down by process.

The trick here is that almost all of the rules and the narrative comes from these oversized â€œLegendâ€ cards that take you through each scenario. If there are special circumstances, triggers or other functions youâ€™ll get all of that from these cards. This almost eliminates rules-referencing but more significantly it creates a very distinct sense of a progressive story being told throughout the game with changing conditions, events and objectives.

For example, in the second scenario, the setup is that some local farmers have heard that some Wardraks are coming up from the south- and the Gors (sort of Orc-like baddies) are ravaging the countryside and heading toward the castle. So from the outset, the mission is to save the farmers and protect the castle. However, the king is ill and needs a medicinal herb from a witch, whereabouts unknown. As the story progresses, the prince joins the heroes for a little Gor-bashing, the witch is eventually found in the fogbanks around the river, and the players have to not only recover this herb but also defeat a Skral (think Uruk-Hai) posted up in a stronghold in the northern forest. Oh, and at some point some very powerful runes appear, so a sort of sidequest may involve a hero or heroes trying to get a hold of these before time runs out.

Each of the four heroes has seven â€œhoursâ€ to do things in during a day. Moving from space to space costs an hour, initiating battle with an enemy costs an hour per round. Combat is a sort of shaky, not entirely satisfying dice-off where rolls plus a strength stat yield a differential damage rate. There are merchants that sell just a small handful of useful items (including a falcon) and wells where heroes may replenish willpower (a measure of life points). The heroes can also continue to act beyond those seven hours at a willpower cost- sometimes itâ€™s worth it when time is running out or when someone needs to stop an enemy from entering the castle.

Once all of the heroes are resting for the day, thereâ€™s an event card draw and the monsters all move on a preordained path toward the castle. If a specified number get there, itâ€™s game over so there is a touch of the typical co-op â€œwhack a moleâ€ going on. The evening ends with the Narrator token moving up on the track, possibly triggering another Legend card.

Oddly, defeating enemies also increases this track. The story progresses faster if you are more successful in combat. Initially I found this somewhat awkward but it is actually a pretty smart way to pace the game. Youâ€™ve got to fight to keep the enemy out of the castle or from other objectives, so your successes accelerate the story. This can make the game easier or harder, depending on the Legend and a couple of variables. There are also alternate Legend cards that you can use to adjust the difficulty.

But Iâ€™ve found that the â€œstandardâ€ difficulty is right where it needs to be. This is a co-op that gratefully does not equate challenge with beating players over the head. It is also not something like Ghost Stories or the Lord of the Rings LCG where success or failure is often dictated by the order in which certain cards appear. Players can easily look over the choices and events that occurred during a failed Legend to see what went wrong. The flip side of this is that the game can have an almost puzzle-like feel- it can seem like the players are often somewhat directed toward certain ways of approaching the scenarios. Whether this is a good thing or a bad thing is wholly a matter of taste. I like that it has an aspect of figuring out what to do coupled with some variable elements, dice-based combat and usually a couple of unforeseen setbacks.

But this puzzle-y feel along with the rather scripted, structured narrative can make the Legends feel restrained, and replayability may be an issue for some. This is not a free-form, open world or sandbox style game. Events unfold roughly the same way every time and players may find themselves making similar decisions each time. After a scenario is won, there may not be much to return to at least if the expectation is that each game will offer a wholly new experience. It also feels like sort of a whiff that one of the five scenarios is this training thing that youâ€™ll never play again after the first time, leaving a number of special components practically worthless. Expansions feel like a must for this game to have any longevity.

But what I keep coming back to with Legends of Andor is that it is very unique, and it offers a pretty innovative way of presenting the rules progressively. Itâ€™s not unlike the â€œprogrammedâ€ rules that used to be in more complex Avalon Hill games, but the barrier to entry is even lower. If a group plays together through the five scenarios then they will also be learning while playing. Itâ€™s a shame that there isnâ€™t some kind of random scenario generator or builder, because the system is simple and appealing enough that I think it would be successful outside of the more structured narrative.