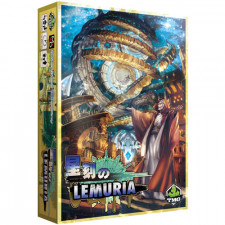 Critical Hits: Resource collection mechanism is an effective tweak on the genre.

Critical Misses: Rest of the design is wholly unoriginal.

True innovation is rare. Oftentimes something unique is really just a tweak on an established product. Adding raisins to a chocolate chip cookie doesnâ€™t change the fact itâ€™s a chocolate chip cookie. The Air Raid in football uses four wide receivers and split lineman, but is still just a spread offense. The 3.5 inch floppy disk was better protected, more compact and stored greater data than its 5.25 inch predecessor - but it was nothing more than a good old fashioned storage disk. Sometimes tweaks are enough to stand out in the market. But not always.

The majority of modern hobby games are tweakers, rather than innovators. Thatâ€™s not surprising when one considers that a couple thousand are produced every year. In that sea of cardboard itâ€™s hard to cause waves with something jarringly different.

Lemuria, from relentless Japanese designer Kuro, is a straight up resource collection and management title that will likely drown in an ocean of games just like it. Over the course of a year divided into twelve monthly rounds, the objective is to develop the fictional titular city by constructing buildings with various resources collected from a mysterious star altar. Buildings are available in a trend row which players essentially draft as theyâ€™re able to pay a projectâ€™s aloted resource requirements. These are worth points based on the amount of resources needed to construct them, with bonuses for taking structures higher in demand. 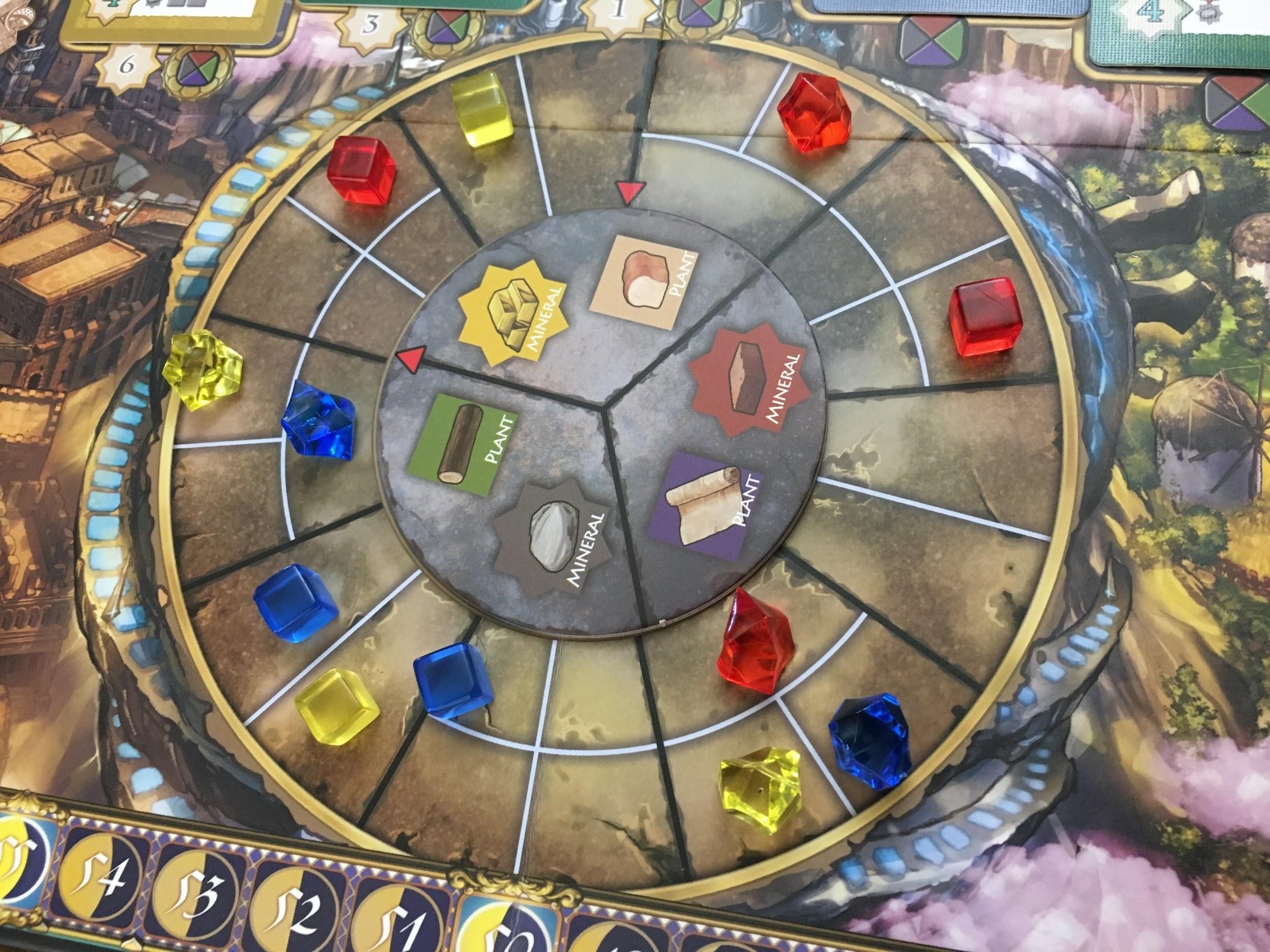 Sacrificing cubes on the altar of resources.

There are also citizen cards which provide nifty rules breaking abilities. You begin the game with a few, can purchase more with gold and they require food to play. After resolving its power, you can then assign the citizen to one of your completed unoccupied buildings for more points. Both buildings and citizens are color-coded. If you match a person to the same category structure you earn even more points. These especially add up during the gameâ€™s three festival months when players score for occupied buildings and for owning majorities in the four categories.

There are other elements to Lemuria. When you construct a building, you can place a marker in one of four areas. Space is at a premium, and obtaining a majority in them earns bonus resources. Plus any presence at all in these spots will garner you the related extras during festival months. Finally, there are optional impact cards. But really you should always include them. These are special twists than can change up game play for a round. They are available for each player to claim, but only once per game and only in a certain order. So you must carefully time your selection, if any, when it benefits you the most - or prohibitively hinders others.

If all of that sounds familiar and unoriginal, itâ€™s because it is. Lemuriaâ€™s sole distinguishing element in an otherwise forgettable design is the star altar, the mechanism by which players collect resources. It works well, but is also difficult to explain. In fact itâ€™s operationally unintuitive, as well, although one does get used to it after some practice. Essentially the game has six different currencies - three plant type and three mineral. A disc depicting these sits on the boardâ€™s star altar and rotates each round. Meanwhile, on their turns players either seed their materia cubes - which correspond to either plant or mineral - on the altarâ€™s slots or harvest previously placed cubes. When harvesting, the discâ€™s orientation identifies which specific resources players collect based on how it aligns with cubes in the altarâ€™s various slots. 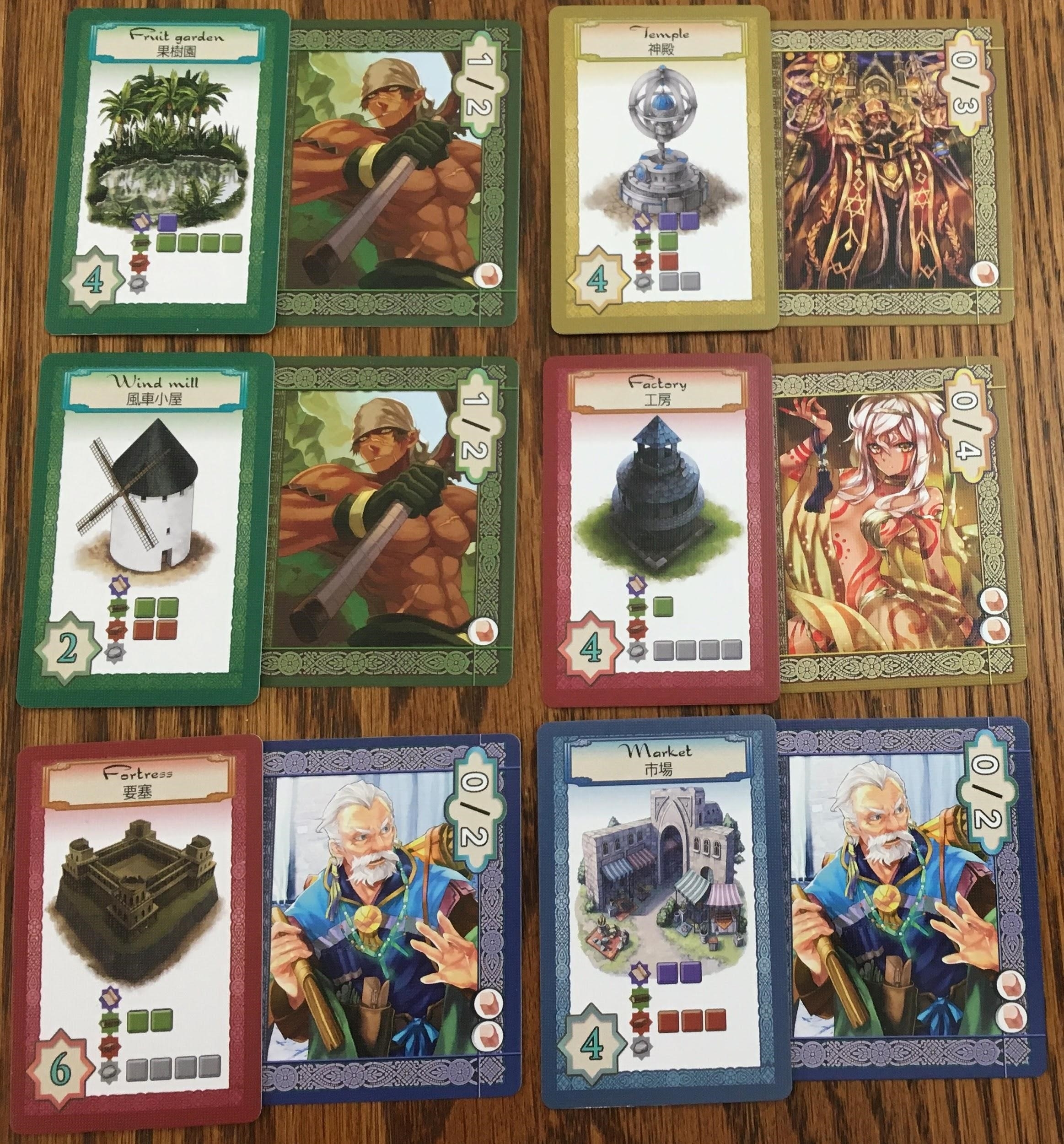 This must be a nice place; itâ€™s drawn the finest people.

The start player at the beginning of a round can pay one gold to turn the disc backward or forward. Barring that, the design is one of efficient planning and timing. There are a couple of rigid restrictions to seeding the altar. That presents opportunities to muscle out your opponents. And vice versa. There are also chances to piggyback into a section and collect resources when another player harvests on their turn. So while adhering to some strict criteria, the whole element also manages to remain fluid and malleable. That rewards calculating and sometimes devious strategists. Itâ€™s a nice puzzle characteristic that should tickle many a Eurogamerâ€™s fancy.

Yet despite the effective tweak that the star altar injects, Lemuria struggles to punch above its weight. Yes, it offers a unique way to collect resources. But itâ€™s still a routine resource collection and conversion design in a genre already packed with many of its kind.