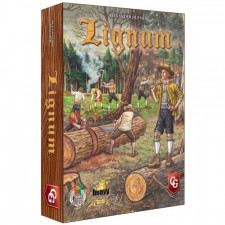 Those trees arenâ€™t going to cut themselves down. In Lignum, the players take on the role of woodcutters who make their living cutting and milling wood. But itâ€™s not all chopping and cash, itâ€™s also about hiring the right laborers, planning your efforts, and ensuring that you have enough food and firewood to make it through the winter.

Lignum is played over two rounds, each with four seasons. Spring, Summer, and Fall are played identically. The Winter round is a little truncated. After two years, the most successful player â€“ measured by the amount of cash theyâ€™ve produced â€“ is the victor.

The game is simple in concept. In each non-winter round, you spend time traveling the board and getting resources. Then, after everyone has finished, you each use those resources to cut wood, transport it to your sawmill, and then sell the raw product or mill it into finished pieces. Easy, right? 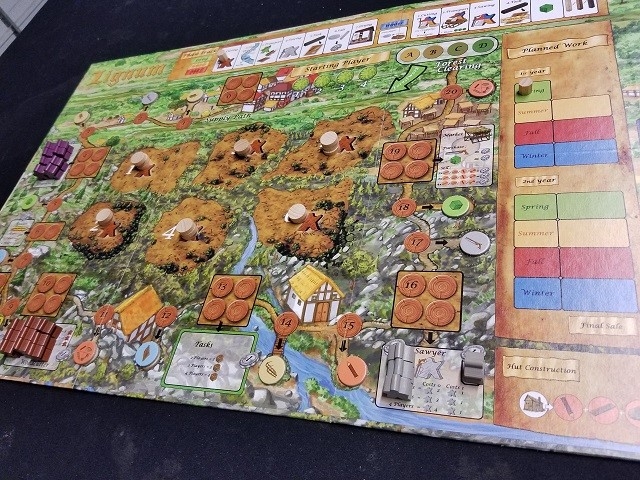 Well, no. Not exactly. The trip around the board can be brutal. There are more than twenty spaces. Some of those spaces, like hiring bearers, woodcutters, or sawyers, can accommodate all the players. But many can only house one player. Each round, those spaces are seeded with equipment, food, and other bonuses. If you stop there, you get the bonus.

Equipment can be critical. If you want to mill your raw wood, youâ€™ll need saws. If you want to efficiently transport your cut wood from the forest to your sawmill, youâ€™ll need rafts or carts â€“ or a sled in the winter. And not all equipment is available for purchase at the market. So sometimes it can be essential to leap ahead on the track and grab something before your opponents can do so.

But leaping ahead comes at a cost. You can only move forward, never back. So anything you pass over is skipped. And some spots you skip at your peril. If you donâ€™t hire any bearers, you might not be able to get your wood to your mill. Miss out on woodcutters, and youâ€™ll be unable to cut new wood. Skip sawyers and you wonâ€™t be milling anything this round. Of course, every player gets one â€œwildâ€ worker that can do anything. Even so, youâ€™ll definitely need help.

The critical thing is that all this equipment you gather and laborers you hire arenâ€™t immediately useful. Only after everyone has completed the path do you actually start using them. Once the path is completed, players each complete certain tasks and can do so simultaneously. For instance, they use woodcutters to cut wood, bearers to transport wood, and sawyers to mill it. They also can complete any task cards theyâ€™ve picked up and gather any logs traveling by river. Each of these actions can be played simultaneously by all players.

This structure has two major impacts on the game. First, planning is key. Even before you take your first step around the path, you need to have some idea of what you want to achieve and how you will get there. This is not a game where you can go skipping down willy-nilly and expect to perform competently. Second, it virtually eliminates the significant downtime associated with heavier titles. Moving down the path actually proceeds fairly quickly. The decisions are tough, but tend to come in bite-sized chunks. Then, when it gets to the meat of how you cut and transport the wood, or use your equipment, those actions take place simultaneously â€“ drastically reducing the time youâ€™re sitting there internally screaming at your friends to make up their mind and do something. 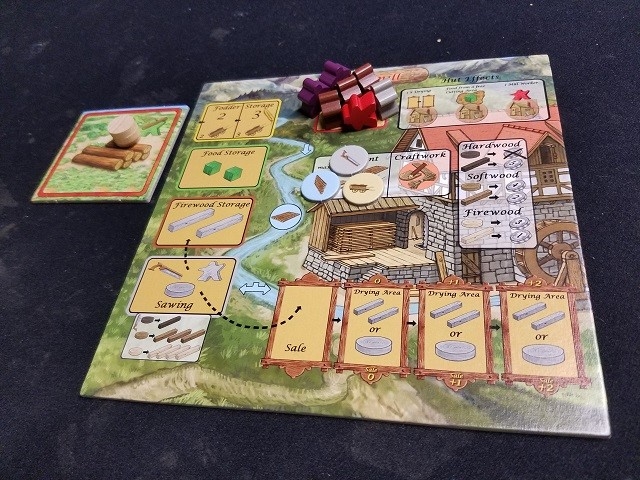 Because of the scarcity of equipment, the game also prevents anyone from becoming too self-sufficient or building up an empire. In general, youâ€™ll get a meager income each round from selling some firewood that will be used straight away in hiring more laborers the next round. The big points come from completing certain tasks â€“ all of which provide a big glut of coins at game end.

Because of the focus on planning, Lignum will be somewhat opaque to first-time players. Itâ€™s not immediately obvious how having one more bearer or skipping that raft tile is going to turn out for you. But after a round, the basic structure comes into view. And after a game or two, the strategic layers start to unfold. While this learning curve may be off-putting for some, it should be a real delight for those who enjoy heavy games.

And the strategic space is surprisingly large. Unlike many titles which mask their strategy in a wealth of point-giving options, so that no matter what you do, you feel like youâ€™re succeeding, Lignum forces all players into the same basic structure. But the competition for scarce resources is what reveals the subtle strategies and separates the novice from the learned player.

Fans of heavy games, especially heavy euros, will find a lot to love here. Strong replay value, competitive without directly tearing down your opponent, with a huge emphasis on forward planning. It may not revolutionize the hobby or introduce entirely new concepts or mechanisms, but it flows in a way that demonstrates its solid design. And it easily stands among the best of its peers.