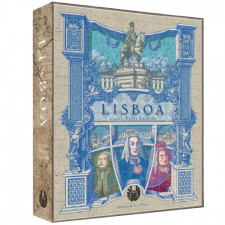 Terrible devastation has rocked the Portuguese capital of Lisboa â€“ or Lisbon if you prefer to impose English names. Throughout the game, the players attempt to rebuild the city to its former glory. Theyâ€™ll need to clear the rubble, open public buildings, produce goods, and earn the favor of the King, the Marquis, and the Chief Engineer.

Just as in real life, though, rebuilding Lisboa is not a simple task. This game is a deep affair that encourages long-term planning and careful observation of your opponents. It has a dense system of interrelated actions that seem quite opaque at first glance â€“ and remains so until a few turns have gone by. While this title may not be casual friendly, it would be a mistake to disregard it.

Lisboa is largely driven by card play. Each card can be played in a number of different ways. First, cards can be added to your own Portfolio. Once added to your Portfolio, they typically give you an ongoing ability (such as a coin discount) or become more influential. Upon including them in your Portfolio, you then can sell your goods for money or use them to influence the nobles to take certain actions. Those actions might allow you to gain favors or build ships. 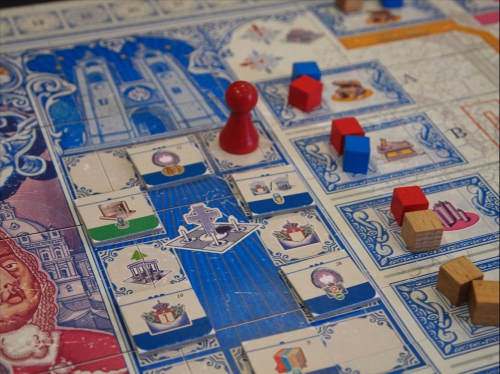 But the cards are the most powerful outside of your personal Portfolio. A noble card can be played to allow you to use the most powerful of actions. These include building a store, opening a public building, or obtaining a decree. Not coincidentally, these are also the chief methods for obtaining points both during the game and at end game scoring.

For players fond of deep, thinky experiences, Lisboa has a lot to offer. Strategies are not linear. Often, seemingly deep games can be distilled down to simple trees. Make wood to get gold. Then spend gold to get points - easy. But thatâ€™s not the case here. You add cards to your Portfolio to build an engine, but to increase that engine you need to get rubble. Of course, you can get rubble by building stores, but youâ€™ll need money for that. Money is gained from shipping, which requires goods which in turn comes from stores. And public buildings need your officials and provide points. And let's not forget the Cardinal. It all comes together into a finely woven mesh.

But that mesh isnâ€™t a mess. Instead, you get the distinct impression that the whole system is finely calibrated. The few random elements are limited to card draws, and even then Lisboa provides a display to reduce the whims of fate. Plus, you can get more out of your turns by gaining favors. If I have the Kingâ€™s favor, then when another player takes the Kingâ€™s action, I can follow along and do it, too. That effectively gives me more turns each round.

Getting more turns can be critical. On any given turn, you actually accomplish very little. It is only after three or four turns have gone by that your plans begin coalescing into achieved goals. But if I can sneak a few extra actions in on other playersâ€™ turns, that can be the deciding factor between victory and defeat.

Lisboa isnâ€™t especially cruel, but it isnâ€™t overly kind, either. Competition is fierce and permeates the entire experience. Players will wrestle for area majorities in the stores, use officials to block their opponents from bending the ear of the nobles, race to open the public buildings that will benefit them but not their opponents, and battle for decrees â€“ even just to deprive their opponents. 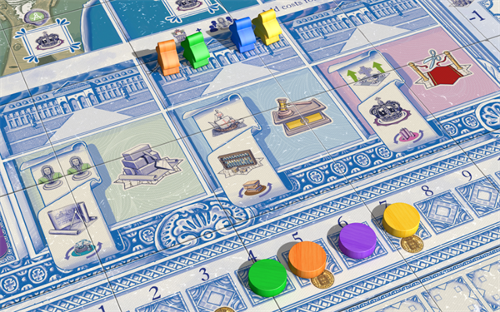 In fact, because of the interrelations between the actions, and the ability to tag along with opponentsâ€™ decisions, it has that strong interaction common with many economic games. And the competition feels so much stiffer because each major goal requires several turns of preparation before it can be accomplished. It isnâ€™t easy to simply pick a different action or pivot to new surprising opportunities. So having an opponent block you can be harsh. And blocking an opponent feels all the sweeter.

But that also means itâ€™s important to pay attention to what your opponents are doing, and whether they can do it before you can. Will they build that store before you? Do they want to open a different public building than you and can they get there first?

Lisboa is perhaps not a unique title, but it is a fantastic one. Itâ€™ll have you constantly analyzing the situation, looking for every advantage. Even though it has an economic feel, you wonâ€™t need a spreadsheet to play it and, once you get going, it actually hums along with its own consistency. If you like your games on the heavy side, if you arenâ€™t put off by titles in the three hour range, then Lisboa is one you should definitely investigate.