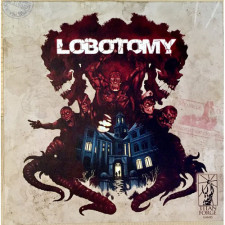 Kickstarter has produced many success stories. Gloomhaven, which received several mentions in our Best of 2017 (So Far) feature, is an excellent example of a visionary designer realizing an ambitious dream through crowdfunding. But there is a fine line between ambition and delusion. The worst Kickstarter horror stories are the ones where unachievable stretch goals and directionless auxiliary purchases feed into a shared fantasy; delivery of the project (often delayed and incomplete) hits like a hard dose of reality. Itâ€™s the old adage of the inmates running the asylum. And thatâ€™s Lobotomy in a nutshell.

Lobotomy tries to draw you into its nightmarish world with an attention-getting premise: it has all of the trappings of a horror-inflected, miniatures-heavy dungeon crawl--think Zombicide or The Others--but all of the action takes place within the minds of inmates in an insane asylum. You only think youâ€™re thwarting the schemes of demons, vampires and posses of insane clowns. Equipped with random trash that they imagine to be holy water and flamethrowers, the â€œheroesâ€--who imagine they are characters like John Constantine and the Terminator--can unlock new powers by feeding their own delusions and anxieties in an RPG-lite skill upgrade system, where the skills come from categories like OCD and Anxiety Neurosis. With the ability to play up to four randomized scenarios per game, Lobotomy promises nearly endless variety. 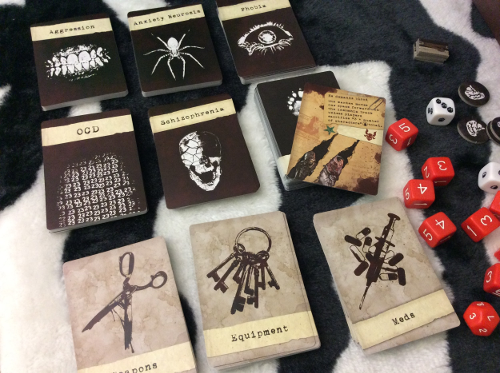 Characters can bolster their unique skills with abilities from the Mental Condition decks or items they find--or imagine.

All of which sounds pretty great. Even as Iâ€™m writing this, knowing how bad the game is, Iâ€™m starting to get sucked back in. So you know where Iâ€™m coming from, I love horror, especially psychological horror like Silent Hill, Session 9, and Shutter Island, so this blurring of reality pushes all my fun buttons. But even my ludomania canâ€™t sustain itself against the sobering reality of Lobotomyâ€™s uninspired gameplay, poorly realized theming, and steep learning curve, which is more like an impenetrable cliff face.

Given the subject matter, I could make any number of puns about lobotomized designers or seemingly normal gamers being driven insane. Iâ€™ll settle with one: Lobotomy makes my head hurt. Apparently, the translator Titan Forge Games hired was laboring under his own delusions re: his English fluency, but awkward phrasing and misspellings are the least of the tomeâ€™s problems. More significant are the missing or contradictory rules and poorly laid out components that hit you almost immediately. Itâ€™s never a good sign when youâ€™ve gone through five rules threads online before you hit step 4 of setup, and Iâ€™ve had to repeat the process for every new scenario Iâ€™ve attempted. Nor is it good when components are described and pictured as possessing features they do not have; youâ€™ll wonder if youâ€™re imagining the â€œhighlightingâ€ on the board. A clean-up campaign by an over-exuberant fan has resulted in a revised rules manual and scenario book, but thatâ€™s only muddied the waters, resulting in two â€œofficialâ€ interpretations of some contentious rules and no resolution for others.

I wonâ€™t waste the review harping on the rulebook, but I canâ€™t resist one shining example of obscurity:

â€œWhen your insanity reaches itâ€™s [sic] maximum, you cannot use it anymore until you regain it. If you are at the maximum value and something forces you to lose insanity again, you are taken back to the solitary confinement.â€

Maddening. But I donâ€™t believe a bad rulebook is an unforgivable sin. In fact, while I acknowledged in my Mistfall review that it was â€œliterally impossible to tell if you are playing the game correctly without consulting outside sources,â€ that game remains one of my favorites. But if youâ€™re going to make players jump through hoops to learn your game, the end result needs to be something special. And Lobotomy, despite its premise, is nothing special.

This is a dice-chucking dungeon crawl, but not a modern one. Nothing is intuitive or streamlined, and for no good reason. Dice work in inconsistent ways depending on the situation, often utilizing the same stats differently. You have 2d6 rolls where the sum needs to fall under your stat, other rolls where your stat determines the size of your dice pool, and still others where successes are rolls equal to or higher than your stat. Area of effect attacks work differently for players and enemies--why? Could the designers think of no better way of handling locked doors than seeding the board with 40 randomized tokens during setup? If third monster spawns are only for 5-player games, why isnâ€™t there anything on the card to reinforce that? Arkham Horror felt more modern and streamlined, and thatâ€™s more than a decade old. 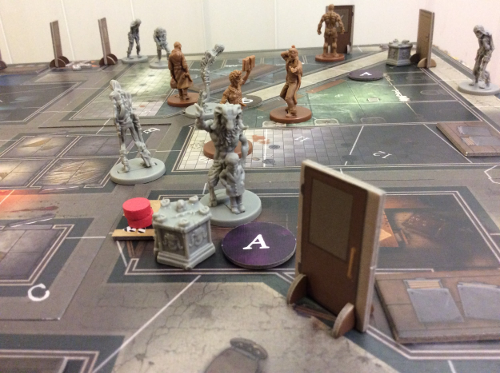 At least the minis and other components look nice, but Iâ€™d rather they were functional.

I can only imagine two reasons for anyone to suffer through Lobotomyâ€™s learning curve, and those are the setting and the promise of overlapping scenarios. To temper your expectations for the latter, I only need to point out that, contradictory to the 30 minutes per scenario playtime the box implies, most players are reporting each scenario lasting two hours, making a full four-scenario game an eight-hour ordeal.

As for the premise, you wonâ€™t find it reflected anywhere in the game. There were ways to do this: for example, having item cards with images not matching their descriptions would have been a nice nod to the heroesâ€™ hallucinatory state. Instead, the game plays out entirely within the nightmare, with no hint of the underlying reality, making it feel more like generic horror (and not particularly tasteful, as scenario names like â€œLesbian Vampiresâ€™ Diariesâ€ suggest). And even this fantasy world is unimaginative; the scenarios are purely mechanical, with no background flavor, and half of each heroâ€™s Memory deck is the same generic set of cards. Plus, with eight heroes in the box, do we really need two who think theyâ€™re vampires?

As gamers, we have the power to prevent games like Lobotomy from being made. Next time you see a game on Kickstarter promising a glut of minis, pop culture references, a menu of add-ons, and no clarity in the rules, just close your eyes and repeat to yourself, â€œIt isnâ€™t real.â€