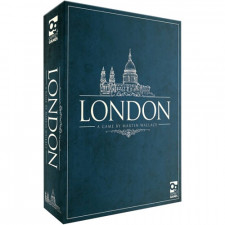 Critical Misses: Theme is secondary, graphic design could use work, rulebook could be improved

The Great Fire has ravaged through London. While the devastation is immense, the city must rebuild. And that means putting together new areas of commerce, building civic infrastructure, and ensuring proper governmental controls. In this second edition of London, players will compete to gain prestige as they rebuild the city. But in doing so, theyâ€™ll also need to avoid creating too much poverty or taking out too many loans.

On a given turn, a player can only do one of four things. They may play cards to their city, buy a borough, run their city, or draw more cards. When playing cards to their city, they can do so in several stacks. Only the top card of a stack is operative, but several cards will flip face down during the game. So being able to play on top, and make a stack useful again, is a good thing. And, in general, you want to have as few stacks as possible and still have a successful city. 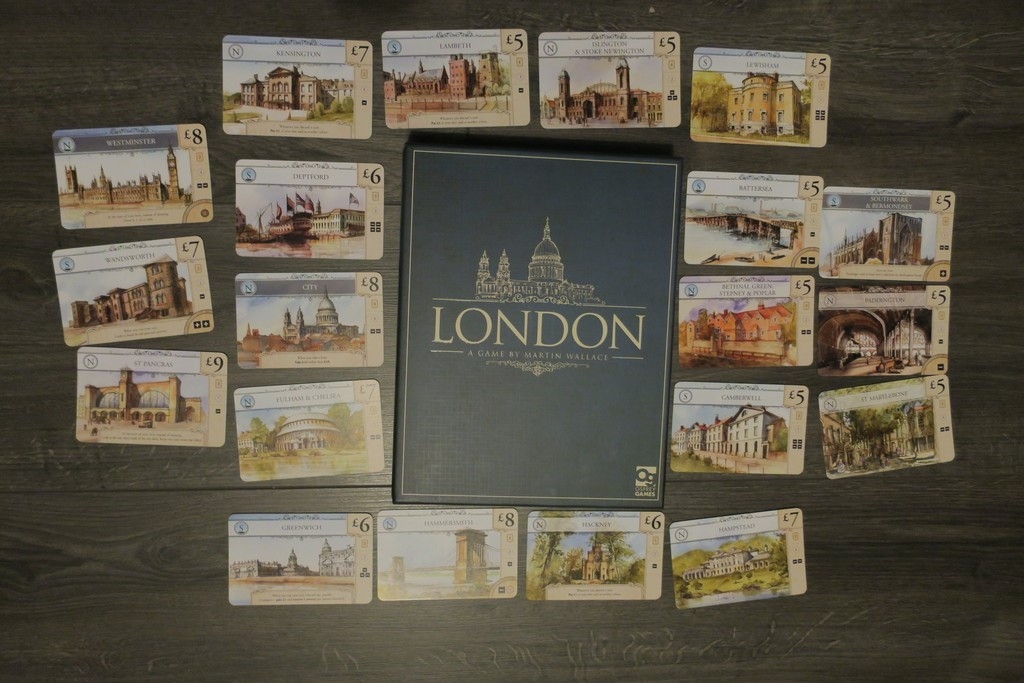 Playing cards to your tableau is relatively simple. You take a card from your hand and plunk it down. Typically, the only cost is that you discard a card of the same type. But discards donâ€™t go to an out-of-play pile. Instead, they go to a board â€“ at least temporarily. When any player has to draw a card, they can choose to draw from the discard board instead of from the draw stack. This mechanism prevents players from being able to easily bury good cards and prevent their opponents from getting them.

Boroughs represent specific locations in London and can be purchased for a fee. They provide one-time benefits generally in the form of card draws, points, and poverty reduction. Often, they provide an ongoing ability as well.

But the meat of the game is in running your city. That means you get to activate each card youâ€™ve previously played. The majority of cards are used once then flipped over. But after you run your city, you gain poverty- one for every stack of cards, one for each card in hand, and one for each loan.

London provides a number of really interesting tensions. For instance, you might have played a great combo to your tableau and want to run your city right away. But if you have too many cards in your hand, you might get buried in poverty afterward. So you have to take a turn or two getting those cards played. Similarly, you might want to have a sprawling tableau and do a ton of stuff. But every stack nets you poverty, so you want to try to get a lot accomplished with fewer active buildings.

And the whole poverty mechanic is really interesting. At the end of the game, whoever has the least poverty discards all of it. Then everyone else discards the same amount. So the importance is relative, not absolute poverty. So you might see games where players throw caution to the wind and the poverty counts range between 20 and 25. Or very conservative plays with counts between 5 and 12. The end result is about the same. Undoubtedly, you can get a higher score if you take more poverty. The only question is whether the other players will also be taking poverty. If not, your excess poverty could cost you more points than you gained. 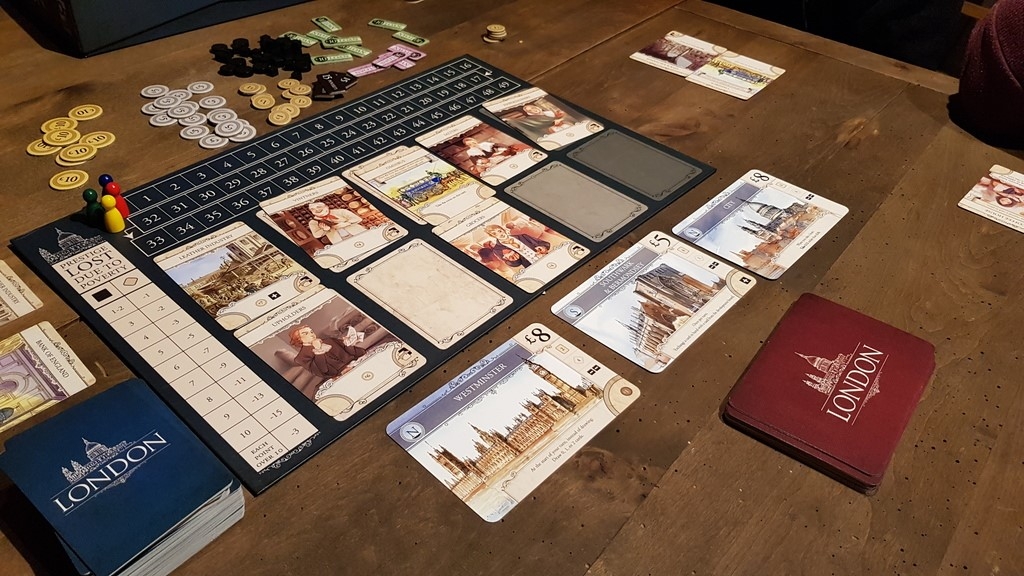 For those who have played the original version of London, this is a substantial improvement in several respects. The boroughs are now in card form rather than a board. And, instead of being instruments of poverty reduction, they now provide special powers and one-time bonuses upon acquisition. This means that poverty tends to be a concern throughout the game, rather than everyone having near-zero poverty by mid-game. Plus, certain troublesome cards, like Omnibus, have been redesigned with the new system so that they are still beneficial but no longer overly powerful.

In fact, I was not a big fan of the original version of London. But this second edition has addressed the concerns and turned the whole experience into an enjoyable and tense one. While there are only a few â€œtake thatâ€ cards, the game remains highly interactive. Youâ€™ll be constantly looking over at your opponents and their poverty level. Youâ€™ll try to get away with as much as you can while not taking so much more poverty than your opponents that your gains are wiped out in the end.

London has the feel of a well-developed game with the soul that springs from a great designer. It also has the advantage of tons of plays and feedback on the original that was incorporated to bring an even more solid experience this time. This title is easy to recommend for fans of Martin Wallace or his economically euro style games.