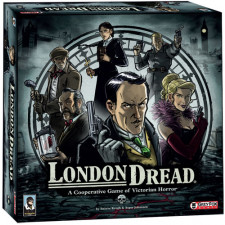 When youâ€™ve reviewed games for as long as I have (15 years), a lot of things start to blend together. You have a greater awareness not only of trends, but also of repetition and redundancy. Occasionally â€“ or even often â€“ a sense of ennui sets in and it becomes harder to be impressed or moved by a design. To put it bluntly, there may be more games out there on the market today than ever before and game players are certainly spoilt for choice but the fact is that the truly singular or innovative designs are fewer and further between. Therefore when a game like London Dread comes along that synthesizes familiar elements in an unexpected way in a unique setting, Iâ€™m prone to give the game a little more leeway. Iâ€™d rather watch a forward thinking, one-of-a-kind design crash and burn than sit through a perfectly competent, masterfully balanced game that is just like 20 other games out there expressing the same tired, worn-out settings and themes.

When I read through the rules of London Dread- which by some accounts are confusing and badly written- I realized that I had in my hands one of those precious nuggets. Here was a design that proposed to somehow bridge the gap between an Arkham Horror-style co-op adventure game with heavy narrative and the real-time antics of something like Space Alert. And with programmed movement to boot. Iâ€™m not much of a fan of real-time designs or programmed movement, so this game still had its work cut out for itself, despite endearing me with its Victorian horror setting and these awesome clock components given to each player. 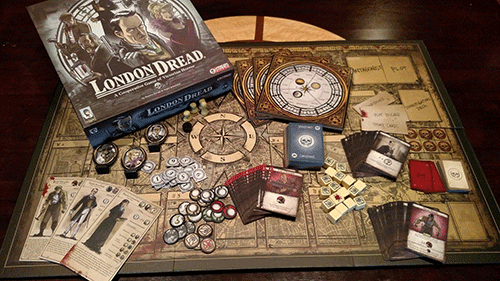 Game ships with four precision timepieces and a 5% accurate map of London in the Victorian era.

The storyline is penny dreadful stuff with mysterious caped killers, secret occult lodges, opium dens, organ theft, seedy underworld doings, and other gaslight ghastliness. Over the course of five chapters, the playersâ€™ investigators will attempt to resolve various challenges and trials requiring a host of different skills and of course some timely cooperation to get things done. Succeeding at these challenges will limit the main adversariesâ€™ power, but failing them or ignoring them will only make the bad guys stronger in the end.

A map of London is laid out in four quarters with six slots each for these Dread cards that depict the general nastiness the players must overcome in exploring the world of London Dread. Seeded in these Dread cards are also plot cards that must be resolved to move the story forward. To do this, youâ€™ve got to plan. The first stage of the game is a timed 12 minute period where each player has to plot their course of movement for the day, placing movement counters in their clock corresponding to the hours of the day. So if you need to meet up with another investigator in the 4th card slot of the north quarter at a certain time, you have coordinate with that player to move your piece and arrive at the same time at that slot. And youâ€™ll want to do this because each investigator has certain skill icons the others do not, and of course the Dread cards usually require several icons to succeed. There are also items and other ways to get icons such as â€œConfidence Cardsâ€ if you come up short.

The catch is that all of these Dread cards are initially face down and during the planning phase, anyone can flip one up. If the cards are left face down, they have two skulls that will add points to the Dread track. Flipped up, they generally have more. This means flipping a card can actually be risky, but you have to do so to complete it and get it off the board. During the planning phase, you might wind up in the first couple of minutes plotting out a certain route and arranging meetings with other players but then halfway through you have to completely re-jigger your schedule because other concerns have appeared. And then by the end of the 12 minutes, you might be pulling your hair out trying to get your timeline sorted in a frantic, last minute rush. Oh, and certain cards can only be resolved during morning, noon or night.

Once 12 minutes are up (thereâ€™s an optional app to time this with sound effects), the schedules are executed and players try to solve the Dread cards. Penalties may apply for failures. And the mandatory Plot cards are handled a little differently, with investigators rolling dice and flipping cards from a personal deck that also includes a kind of personal crisis that may find them contributing nothing. 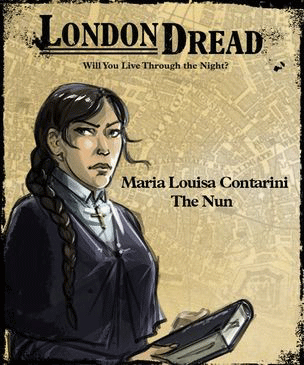 In games, being a nun means living a life of daring adventure and directly combatting the occult.

Thereâ€™s a mix of familiar elements with a unique presentation and an unexpected convergence of gameplay styles. The scheduling mechanic is smart and the method for executing the plans reveals that even the most coordinated group gets out of synch and someone winds up in the wrong place at the wrong time. Thereâ€™s no need for luck to provide misadventure; failure to coordinate often does more damage.

I like this game a lot and I think it is a fresh approach to the tired co-op adventure game concept. The time pressure is meaningful and I appreciate how it really demands a sense of coordination. But Iâ€™m also somewhat disappointed that the narrative isnâ€™t stronger. I donâ€™t like that most of the Dread cards can appear in every story and they sort of just provide a spare notion of the story around the more specific plot cards. Iâ€™d like to see a design like this where each chapter has a completely unique set of Dread cards so that a more focused storyline could emerge. This could limit replayability, sure, but I think the game would be able to tell its story more coherently. Iâ€™m also not completely convinced that scheduling is always what I would call â€œfunâ€. Part of this is because, again, I generally donâ€™t care for real-time elements or programmed movement.

A note about player count. Unlike many co-ops, this game is not very playable solo. It can be done, but you will be coordinating multiple characters and it is actually quite a headache- let alone impossible to do by yourself in 12 minutes. Itâ€™s not officially supported anyway, so regard this as strictly a 2-4 player game. I actually quite like the 2 player option as it adds these ally cards to the map. These give you icons to help you resolve Dread and you can choose to discard them for greater effect. They are a little more reliable than having another player meet you at a certain place at a certain time. But with two you also lose the interaction and haywire strategizing that goes on in the planning phase.

I donâ€™t think London Dread is completely successful but by jingo It is trying something new and I absolutely admire the game for it. I find myself wanting to see more not only of this design but also of this setting, with its great illustrations and stylish horror elements. Itâ€™s definitely worth a look if you are interested in the more vanguard, forward-thinking designs available today.