Critical Hits: Fast, fun and deep gameplay with meaningful themes; classic Knizia design
Critical Misses: After all these years, the board is still really superfluous.

Reiner Knizia's classic Lost Cities, a two player card game, was originally released almost 20 years ago, back in 1999. At that time it was part of an exceptional series of "games for two put out by German publisher Kosmos and brought to the US by Rio Grande Games. Over the years it maintained a high degree of popularity because of its simple play and rich strategy. But as time has worn on, it has kind of been forgotten, as many games of the late 1990s and early 2000s have been. The gaming hobby has unfortunately moved away from favoring these kinds of simpler, more direct designs. With a new edition out from Thames Kosmos, retaining most of the classic Franz Vohwinkel artwork and of course the original evergreen gameplay, there's never been a better time to come back to Lost Cities - or to discover it for the first time. 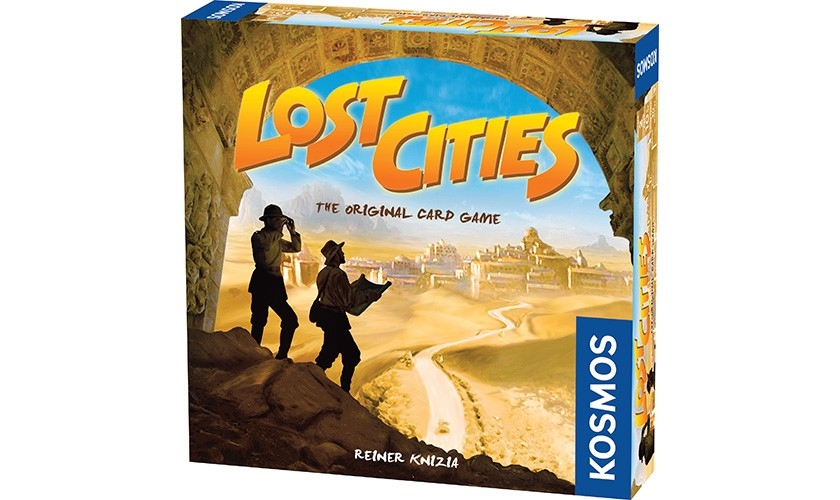 Like many Knizia designs, the impulse for many modern gamers it to declare that the theme is "pasted on" and that it is nothing more than an abstract game with pictures. As usual, these detractors are wrong as the game illustrates very specific themes of investment, risk and reward against a backdrop of exploration and discovery. The idea is that each player is a financier funding up to five different archaeological expeditions. Doing so incurs debt, but successful expeditions will profit in the end. Or, you might find yourself struggling to break even on a faltering expedition.

In game terms, each expedition corresponds to a color, and each of these suits has 9 cards numbered 2-10 and three "handshake" cards- more on those in a bit. From a hand of eight, you play one card each turn either to one expedition or to the discard pile of that color. But opening a new expedition automatically sets your score in that sojourn at -20. Playing additional cards to it will increase your score, with the catch being that you cannot play a card of lower value than the lowest card you have previously played there. When you draw, you may either draw from the deck or you can take the face up card from any expedition's discard pile.

There is some tricky play here, and some tough decisions. Deciding to open an expedition means taking -20 points right off the bat, but if you have a run of cards in that color and you know that you can make it, it could be worth it. Or you might see that your opponent has already played a number of cards in an expedition, which may make it more risky or even inadvisable to even bother with that color. As in a lot of Knizia's best games, picking your fights is a key point of consideration.

Once the last card is drawn, each expedition is scored. You simply add up the values of all cards you've played in one, and dock the 20 point startup penalty. But if you have played handshakes, each one acts as a multiplier- so there is value in playing these "agreements" early, although they can delay the start of an expedition and they can also signal to your opponent what your intentions might be. There is also a 20 point bonus for any expedition that has at least eight cards. Of course, victory goes to the player who made the soundest and most lucrative investments over the course of the game.

With experienced players, a round is about 15-20 minutes and it is easily (and even desirably) playable in multi-game sessions. I recall one night, shortly after I bought the game in 2000, where a friend and I played something like 10 games in succession. Indeed, there is an addictive quality to the game that coupled with its ease of play keeps you coming back. For those looking for a multiplayer game, I would really advise that you check out the Lost Cities board game, but there are four player partnership rules widely available on the Internet.

Lost Cities is simple, fast, fun with compelling, immediately graspable themes of risk and reward coupled with an always appealing "Indiana Jones" style setting. And it looks really neat too, with each expedition's cards subtly illustrating the progress of each journey. This is a true classic, a game that will hopefully still be played for another 20 years, and the newest edition ensures that a new generation of game players have access to it.