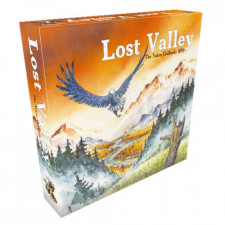 Slowly finding your footing atop a jagged and broken peak, your narrow eyes meet the burning horizon and take in the wild basin like a desiccated skeleton guzzling water. The rows of pine, formed up like a regiment of soldiers to meet you on the battleground, flank the tributary with prestige. This is where the road has taken you and where your destiny will be confronted. With pick and dynamite, you will carve out your legacy like a prolific scholar penning the holiest of texts.

This is what an adventure game wants you to feel. Beyond the linen textured cardstock and plastic miniatures, a monumental story is waiting to be forged. Yet the vast majority of titles want you to craft your narrative via poorly written flavor text and repetitive deck exploration. That sense of discovery is restricted to specific content that grows stale and ages poorly. Once you’ve burned through that encounter deck and seen every event, the magical becomes mundane.

Lost Valley approaches adventure not from a sense of content discovery, but from an angle of systematic reconnaissance. Players explore by laying out tiles and forming the valley not only to build up the landscape but to reveal vectors of mechanical interaction with legitimate reward. Rather than flipping a card and making an arbitrary skill check to accompany a sentence of fiction, you’re grouping tiles depicting mountains teeming with gold, hidden stills soaked in whiskey, and caves brimming with wildlife. Options and choice are unveiled in an organic way to promote impactful exploration that will define the experience in concrete and visual ways as you’re beckoned to seize control of your own destiny.

Exploration is typically oriented towards unveiling a mix of resources to be exploited or a specific path to a declared end point. Both of these qualities are exemplified in titles like Eclipse and Escape respectively. Lost Valley takes this mechanical process occurring around the edges of the game’s structure and harnesses its theme to yield a greater sense of purpose. By defining the geography and uncovering opportunity, players actually partake in a wondrous sense of exploration as the rewards reaped convey a sense of awe akin to pioneering. Lost Valley is immersion without effort.

This strongly ingrained sense of theme is the identifying characteristic of this design, but the rest of the package certainly has its fair share of moxie. This slick hybrid has players taking on the role of gritty prospectors descending into the Yukon in search of wealth. You will hunt beasts for food and fur, pan for gold dust in the wild river, and build mines across the various crags. The options and opportunities abound and a nearly RPG-like sense of character customization via gear, supplies and skills is ever present.

Prospectors move across tile edges as play moves at a brisk pace, affording each player a single action on their turn. This allows for the game to support a pretty large range of 2-6 players without breaking a sweat. You can expend your action to pick up a mysterious event token, mine the face-down gold tokens, hunt wild beasts or even chop timber. Typically you’re either gathering resources like food and wood, or expending said resources to extricate precious metals or increase your ability to do so.

The two types of mining in the game consist of the more expensive mountain gold or the easier to acquire river gold. Logically, while mountain gold requires a greater buy-in it also pays out in higher amounts. Both options are viable and seem to be balanced very well.

Beyond the charming diamond shaped land tiles that are revealed to form the valley, a number of excellent tactile decisions were made to enhance the overall experience. Players are given thick cardboard character sheets that define gear slots to store equipment and materials vital to their quest. You get to place tokens and wooden bits into your backpack akin to futzing with your inventory in Diablo, albeit without the headaches of worrying about odd shapes and strange angles.

Taking a sack of gold you tore out from the mountain back to the general store to cash in on a rifle and canoe is extremely entertaining. These new toys you pick up have an immediate impact increasing efficiency and yielding greater return to feed the machine. This cycle of exploration, exploitation and consumerism is so deeply ingrained into the fabric of our existence that our brain is conditioned to feel warmth and satisfaction. It’s remarkable and naturally has your energy ramping up to climax.

Unfortunately the finale of Lost Valley never quite pays off as the experience ends due to the map being maximally explored and winter arriving, or more likely a player hitting 10 sources of gold and running back to the shop to claim victory. Fortunately the journey is so damn good and the experience unequivocally varied that the Yukon will keep calling your name.

This particular version of Lost Valley is a re-release of the original game with some additional balancing and gentle tweaks to the design. This Euro/Thematic hybrid still produces exemplary gameplay and holds up alongside modern sandbox titles, yet its graphic design and component quality is a little frayed at the edges. It appears as though no component upgrades were taken and the muddy graphics and thin tiles clearly come across as long in the tooth.

Deeply thematic play overcomes such inequalities with grace. This is a design that has remained relevant despite a large growth of adventure titles. It’s old school yet fresh, a combination even Uncle Jessie would be proud of.