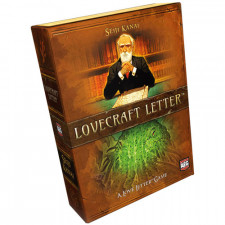 Unless youâ€™re very new to the hobby or have been living beneath a rock for the past five years, youâ€™ve probably at least heard of the groundbreaking deduction micro-game, Love Letter. Itâ€™s immensely fun, if not repetitious, and its fun is multiplied exponentially by the number of players involved. Unfortunately, itâ€™s been played to death by virtually everyone and, like a crack addiction, as hard as you chase that first-time buzz; youâ€™re never going to get it. Luckily for Love Letter fans worldwide, Alderac Entertainment Group has come up with a reskin of the game that doesnâ€™t just bring the Lovecraftian horror setting into the mix, it adds mechanics that bump the game up to a higher level.

Much like the original game thereâ€™s a small deck of character cards, each with its own special ability, and the playersâ€™ goal is to deduce who is whom before they are knocked out of the game by othersâ€™ deductions or machinations. Itâ€™s a very, very simple game from a rules perspective, but like the best games, the fun isnâ€™t found in the rules but rather in the interactions. Lovecraft Letter keeps the air of simplicity alive, adding only a smattering of new material, but the makeover and new mechanics are enough to revitalize the game. It is not only playable for those of us suffering from Love Letter burnout - it has been transformed into an imminently more interesting and challenging game.

The most immediately apparent and influential amendment is the new â€œinsanityâ€ effect. Surprisingly, AEG has managed to not only inject a different setting and theme into Love Letter. This is surprisingly well designed game, and itâ€™s clear that they didnâ€™t just want to reskin the game as much as rebuild it from the ground up using the same basic mechanics as far as the card play but with more nuance and a larger decision tree each round. Cthulhu isn't just window dressing.

The victory conditions for the game are directly related to the insanity mechanic. You can only win if youâ€™ve won a specific number of rounds while sane (indicated on dual-use cards) or the most rounds while insane. The avenue to becoming insane is quite simple: if you play an insanity card, you are insane for the balance of that turn. This is a crucial decision, since you always have two cards in your hand and must always play one of them; you may wish to retain your sanity by playing a normal card, despite it not being as effective a play, hoping to be the last person standing at the end of a round in order to gain a â€œsaneâ€ victory token. Itâ€™s all very straightforward from a rules perspective, but again, the depth is found in the choices you make and the interactions with other players.

Itâ€™s worth mentioning that this is easily the best-looking version of Love Letter that Iâ€™ve ever seen. It comes in a box that resembles a book, and flips open in clamshell format versus the standard drop-top box that virtually all games are presented with. Inside is a perfectly designed, blow molded plastic insert which holds all of the tarot-sized cards, victory tokens, high quality poker chips, and a full set of sleeves with which to preserve your game. Now, I hate sleeves to death because I like to feel the cards, but these are really nice ones On the flipside, Iâ€™m not really super-keen on the artwork. The graphic designer did a fantastic job presenting everything clearly and understandably, but the illustration work isnâ€™t really what I would consider to be on par with everything else. Now, granted, Lovecraft artwork is probably the most produced genre in all of gaming and beyond so thereâ€™s a lot of amazing pieces out there to compare this with but sadly the art is only good enough. Of course, thatâ€™s a matter of taste, so check for yourself and decide if itâ€™s something you like or not. It has no effect on the game, obviously, but because the game is purely card based, youâ€™re looking at the cards during every moment of your experience with Lovecraft Letter so I think it bears mentioning.

My final thought on this game is that itâ€™s easily the most interesting form of Love Letter that Iâ€™ve ever seen, and as a fan, Iâ€™m delighted that they didnâ€™t just slap on some gruesome pictures and call it new. This is a fully realized new product that stands on the shoulders of giants and, yet, still manages to feel brand new and fresh in many ways.