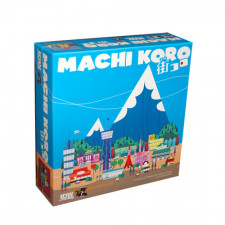 KM: What do you get when you remove all the interesting elements from Settlers of Catan? Machi Koro is the answer to this question, one that would have been better left unanswered. You have the most hated parts of that classic game: the cold, unforgiving die roll, the questionable game length, and the rich-get-richer game structure; all without the brilliant negotiation and clever board play that have made Catan such a mainstay. Whatâ€™s worse, Machi Koroâ€™s gutted take on rolling a die for resources is far too one-dimensional to earn its spot on the shelf. While itâ€™s a hard pass for gamers, I canâ€™t even recommend it for families, as there are hundreds of games that pack more punch in a shorter time frame with a similar rules overhead.

TL: I could not disagree more. Where you compare it to Settlers and find it lacking, I compare it to Monopoly and find it the perfect bridge to bring others into modern tabletop gaming. It may be mechanically simple, but the game accelerates as it is played and the paths to success are remarkably varied. You can hedge your bets, trying to eke out profits on the most probable roll from each player, or you can put all your eggs in one basket and hope to yourself roll for a bonanza. You can play a denial game that specifically targets opponents or you can play a strategy that ignores them altogether. The range of strategies, the simplicity of the mechanics and the short game length makes it a game that I stick in a deck box and keep in my purse.

Iâ€™m an old-school miniature wargamer - cold and unforgiving dice donâ€™t scare me. But the prospect of having to sit through another Monopoly slog with the in-laws certainly makes me feel like Machi Koro is really Japanese for salvation from Milton Bradley.

KM: Well comparing anything to Monopoly is a sure way to make it look good, to be sure. But you bring up an interesting point, as I donâ€™t shy away from brutal, un-mitigatable dice games either. Give me games like Dungeon Quest or dusty wargames packed with dice tables to resolve every step of a conflict over a luckless brain-burner any day of the week. Still, Machi Koro manages to make luck annoying. Perhaps itâ€™s the range of supposed strategies: do I invest in one or two numbers for a big payout, or do I spread out the numbers and hope for a slow payout over the course of the game? Ultimately, it doesnâ€™t matter. Iâ€™m picking numbers at random and hoping Iâ€™m the big winner, and there really isnâ€™t more strategy than there is in buying more Powerball tickets to increase your odds of a win.

TL: Itâ€™s a game that is certainly high on the luck scale, but itâ€™s certainly isnâ€™t mindless. While your characterization to Powerball may seem apt given how much dice affect the game, Iâ€™ve played and witnessed people who are not only playing the game based on dice, but also their opponents, what infrastructure was available to them, and strategically deciding how they were going to develop based on how their opponents were building. Similarly, the point denial strategy affects not only what properties to invest in, but how many dice a player chooses to roll. And thatâ€™s strategy on the most superficial level.

Thereâ€™s also the usage of the major establishments. Iâ€™m reasonably convinced that these purple cards, particularly the Business Center card, are underused in most initial playthroughs of the game. Theyâ€™re high-cost investments and with seemingly low payouts which deter novice players but Iâ€™ve seen a specific strategy that utilizes the Business Center, single die rolls, low cost and low yield cards to win by affecting their opponentâ€™s end game.

While the mechanics of the game are simple, such remarkable strategies, which win games on the merit of play rather than luck are proof that this game is so much more than meets the eye. Canny usage of major establishments, landmarks, strategic acquisitions and predicting your opponentâ€™s behavior based on their strategies are factors in this game which may not be immediately apparent on an initial play.

KM: I suppose Iâ€™m not denying that strategies exist for Machi Koro. But are they engaging? Do they require any sort of skill to execute? Do you need to engage your opponentsâ€™ minds across the table and struggle to come out on top? Iâ€™d say no, not really. Sure, maybe you donâ€™t want to follow someone else, and you can exclude a particular strategy if one or two players pick those cards before you. You can come to the table with a list of buildings to buy in order to execute strategy X or Y, and you can do it without much thought, excitement, or bravado. At that point, you might as well be a flow chart.

Regarding the gameâ€™s length, it almost sounds as if you and I are playing different games, as you seem to be able to knock Machi Koro games out in a reasonable amount of time. My sessions have all run slow as molasses, both in overall game length and turn-to-turn pacing. The first few times around the table, all the players will simply be rolling a die and crossing their fingers for an unlikely payout. A few players may grab the aggressive red cards, which just move money around the table instead of injecting more cash into the economy. The slow build-up phase just goes on for far too long with nary an interesting decision, until finally one or two players will start to snowball over the finish line to put the game out of its misery. Itâ€™s downright painful.

TL: The only time Iâ€™ve had a game of Machi Koro using the core set exceed 30 minutes as advertised on the box have been in cases of slow players who agonize over every decision (Iâ€™m sure there is a special place in hell reserved for those people). Playing with the Harbor Expansion* ** has extended my games of Machi Koro as itâ€™s limited the market of available properties to 10 based on a random draw, as well as adding additional required landmarks to win.

KM: Admittedly if I could get a group that could knock the game out that fast, itâ€™d be a more attractive prospect. But even then, there are just so many better games that fill out a 30-40 minute time slot that itâ€™s difficult for me to see where Machi Koro fits in. Add to that the sluggish pacing and totally lifeless early to midgame phases, and Iâ€™ve checked out 10 minutes into a round. Iâ€™ll grant you that experience can play into making the game a shorter, brisker experience, but I just donâ€™t think thereâ€™s enough depth there to keep me coming back to get to that point.

TL: Right, with experienced players, the game flies by and as you approach the end game it accelerates. By the end of the game, one really good roll is all it takes for a player properly positioned to sweep the board and win. Unlike other games, though, no player is truly out - that fickle die keeps everyone in. I love the game for that; players remain engaged and invested as fortunate die roll for them or an unfortunate one for an opponent can change the state of the game. The game is designed to have that balance and walk that fine line.

And this is why I think itâ€™s fantastic for families. At its heart, the design is such that experienced and skilled players are better positioned to win, but wonâ€™t trample all over newer or less skilled players. When youâ€™re playing with family, that high luck element keeps spouses from harboring resentment (not that itâ€™s happened in my marriage) and children from weeping. Thatâ€™s a good thing.

KM:Hey, if children donâ€™t weep, itâ€™s not a good time in my book. But in all honesty, the high luck element is a double-edged sword. It results in far too many turns where gamers, young and old alike, can do absolutely nothing, through no fault of their own other than guessing the wrong number. And we can talk all day about this or that strategy being slightly more or less probable, but in the end thatâ€™s all you are doing: making a guess and hoping it pays off. There are no real tactics or long-term strategies to put together, and the game doesnâ€™t pay dividends in any other department. See, I can forgive a game for being light on strategy if it provides laughs, a great narrative, a high degree of meaningful interaction, or a whole host of other upshots. Machi Koro has none of these.

TL: Still, combine the family-friendly game design with accessible art, components that are simple and can be sleeved for protection, an inexpensive price point and ability for one to fit the entire contents of the game in a single deck box to fit in any decent mom-purse, and youâ€™ve got a game that is not only designed to accommodate families, but also one that can entertain the younger ones wherever the family may end up.

Neither Monopoly nor Settlers of Catan is mom-purse friendly.

KM: I wonâ€™t argue that you canâ€™t have some level of success in carting Machi Koro around for young children to play, but games do not exist in a vacuum. There are just so many better options that I canâ€™t bother to give Machi Koro the time of day. Glancing over at my man purse (alright, itâ€™s a backpack), I see Sushi Go, Loot, Welcome to the Dungeon, Raj, and For Sale. Iâ€™d pick any one of those over Machi Koro in terms of length, strategy, interaction, and fun; and all of them pass the mom-purse test. Not that I have a mom-purse to prove my case.

*Teri also heartily recommends the Harbour Expansion, which can be purchased separately or is included in Machi Koro Deluxe Edition, which also has the Millionaireâ€™s Row Expansion.

**Kyle heartily recommends against the Harbour Expansion, as it nearly doubles the gameâ€™s length and injects even more luck into the design. While the base game offends by having only one static setup, the expansion makes the opposite error, and the tableau becomes a swingy mess.