Shadows loom over the town of Arkham, Massachussetts. Deranged cultists spread their malignant influence, carrying out obscure plots and eldritch rituals in the unpronounceable name of forgotten gods from beyond time and space. As the cultists grow in power and open rifts in the fabric of reality, unleashing indescribable horrors to prowl the streets, a group of arcane investigators arrives, following the trail of clues in an attempt to seal the gates before the elder gods can awaken.

Those investigators are such killjoys.

Madness at Midnight turns the Cthulhu mythos on its head by putting the players in the spacious robes of cultists worshipping the likes of Hastur, Yog-Sothoth and Shub-Niggurath. And they're not sitting around a campfire singing Kumbaya, either. This is a fully competitive game of area control with a single winner and full cache of ceremonial daggers (for backstabbing purposes). 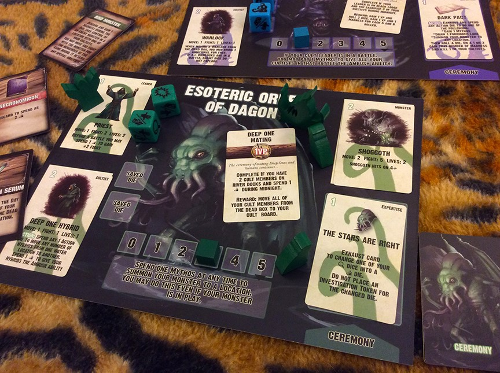 Each cult has its own special abilities and upgrade paths.

Thematics aside, there are some intriguing ideas here, with parallels to Stefan Feld's Luna and Eric Lang's Chaos in the Old World. Like Luna, the value of the areas to be controlled is constantly shifting. Locations in Arkham grant a special ability to the controlling cult at Midnight each round, but that is only a bonus for getting your foot in the door. The real reason to control a location is to fulfill a dastardly Plot. Madness at Midnight is a race to 13 VPs, and victory points come primarily from Plots, three of which will be revealed at a time. While they vary in complexity, many of the Plots are as simple as "control the Witch House at Midnight." Each cult also may, with the correct use of location actions, complete a cult-specific Ceremony, which also often trigger off of controlling locations. So it's less about spreading across the board like an abominable fungus and more about making tactical raids on specific locations at specific times.

Of course, the investigators are there to muck things up. Like Luna's Acolyte, they'll patrol the board, causing trouble for any cults caught in their space at the end of the round. And like the Acolyte, they're somewhat player controlledâ€”you can steer the investigators toward your rivals or merely away from yourself. They're a mild nuisance most of the time, but if they've accumulated enough clues to seal a location, they'll expell all cultists and monsters there, seriously ruining someone's day.

Madness uses a dice-based action selection mechanism. The custom dice have several functions: some faces initiate combat, which could tip the balance of power at a location; the foot icon allows for movement; the Mythos icon can be spent to fuel special effects or enhance your Cult Leaders in combat; and the hand icon activates location-specific actions like rummaging for artifacts at the River Docks, researching spells at Miskatonic University, or summoning your eldritch attack dog at Hangman's Hill. Dice can be rerolled up to five times by increasing your madness, but exercise caution: each time the investigation icon is rolled, the investigators gain a clue, bringing them one step closer to calling in a Federal raid and foiling everyone's schemes. A full madness track means no more rerolls, but it also unlocks your cult's special madness ability. 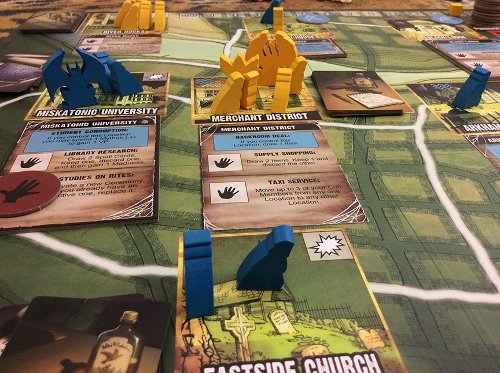 The "ctheeples" are indescribably cute.

The pressure of the ongoing investigation is one of Madness' most interesting elements. If three locations are sealed before anybody reaches lucky number 13, the game ends early. But this isn't some unsatisfying, semi-cooperative "everybody loses" ending. If the investigators "win," then the game goes to the "least visible" cultâ€”the one with the fewest victory points or, as a tiebreaker, fewest minions on the board. This lends a push-your-luck atmosphere to the endgame as players decide whether to race for the VP goalpost or hedge their bets and push for an investigator victory.

Cultist-on-cultist (or Nightgaunt-on-cultist) violence is settled with good old-fashioned dice-chucking, with sixes exploding (as they ought). The similarities to Chaos in the Old World come from the asymmetry between the various cults. Although everyone here has the same victory conditions, each cult has its own set of upgrades, unlocked as milestones on the VP track are surpassed (by any player), and ceremonies requiring different tactics. The Cult of the Skull is the more combat-oriented faction; their upgraded Dark Young's combat dice explode on fives and sixes, their enhanced Druids hit on a 4+, and their "A Thousand Young" ability lets their slain cultists revive for free at the Black Lodge. Meanwhile, the Brothers of the Yellow Sign are the control faction, causing madness in others (reducing their ability to reroll) and moving their minions and rivals around the board. The Esoteric Order of Dagon gain aquatic movement, and the Starry Wisdom can ambush the other cults, attacking first to reduce enemy numbers.

Between the pressures of the investigation and the relatively short VP track, Madness at Midnight only lasts a half-dozen rounds, on average. This keeps things moving forwardâ€”it's usually not worthwhile to camp at the River Docks or Merchant District and farm items while everybody else scores plots and ceremonies. This also takes some of the sting out of the capriciousness of the dice gods, who are truly mad.

Madness at Midnight surprised me with its fast play, thrilling combat and unusual themeâ€”it's easy to slap a "you are the dungeon boss" theme on a game, but this one really does feel like a reversal of Arkham Horror as the investigators collect clues and seal gates while you're just trying to get your Mythos on.