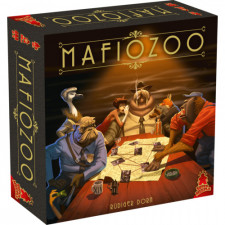 In Mafiozoo, the players are trying to gain influence within the godfatherâ€™s circle of confidants and hangers-on. In doing so, the overarching goal is to control various neighborhoods. At game end, that control will translate into points and the player with the most points wins. Also, all of the characters are animals. Thus the â€œzooâ€ portion of Mafiozoo. Itâ€™s a nice take that keeps the mood light even while engaging in underworld crime and corruption.

Designed by Rudiger Dorn, this title is a reworking or reimagining of Louis XIV â€“ first published in 2005. I played Louis XIV a handful of times back then, but ultimately moved on pretty quickly. Despite some hype, it was mostly forgettable and quickly set aside in favor of more intriguing titles. Mafiozoo aims to fix that with a unique and enjoyable theme and with a few rules tweaks (replacing Missions with Neighborhood tiles) to freshen things up. 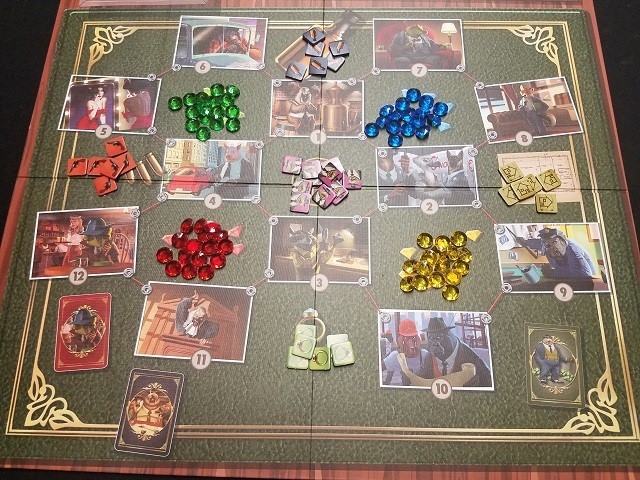 The game is played over four rounds. In each, players take turns using cards to bid on various well connected individuals. There are 12 to choose from and cards will either direct your bid to a certain person, or give you a free bid anywhere. When you bid, you can place up to 3 gems on the person. But then you can move two of those gems off to a connected individual. In this way, you are not totally beholden to your cards and can shift things around to take advantage of your opponentsâ€™ moves.

Once all the bids are placed, you resolve the characters in order. Several of them will give their bonus to the highest bidder. But some allow you to buy their favor with money or even just to show them you have currency. Some of their favors can be used to get a taste of operations around town â€“ often providing income each round. Others might give you bidding advantages or even neighborhood tokens â€“ the key point generator at game end.

As with most auction games thereâ€™s an advantage to going last. You get so see the lay of the land before your final bid. In a four player game, this works well since, with four rounds of play, everyone gets to go last once. With fewer players, different rules spring into action in an attempt to balance out the inequity. 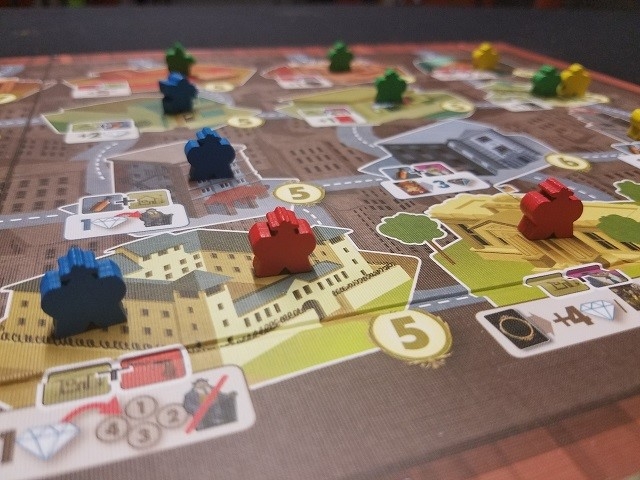 Although there are a lot of trappings â€“ goon meeples, neighborhood tokens, auction cards, etc. â€“ the game really boils down to conceptually straightforward bidding. But despite the relatively simple ruleset, it allows for surprising moves and direct competition. Any given round can be especially cutthroat as players try to swoop in and scoop the other players. All bids are public knowledge and someone has to go first. So sometimes youâ€™ll see someone plop three gems down as a sort of marker â€“ â€œThis one is mine.â€ Maybe. Other players might still sneak in to compete for it. Or, perhaps even worse, theyâ€™ll leave it alone and the player will spend 3 gems for something that might have cost him only 1.

The ability to transfer your bid to neighboring people is really helpful. It turns the cards from an un-fun restriction into a really interesting puzzle. Figuring out how to bid, where to move your gems, and in what order to play your cards is a critical and intriguing aspect of the game. Once you have your favors, you can take over the city and start gaining points.

Although the components are definitely high quality â€“ and I love how the board keeps everything (relatively) compact â€“ someone made a poor decision to include paper money. With everything else feeling so nice, the addition of paper money is jarring. It gives the game a cheap feeling that it doesnâ€™t deserve.

And, while Iâ€™m griping a bit, I have to call out the scoring system. A good chunk of your score comes from neighborhood tokens. There are six different types and you get a single point for every set of six. You also get a point for each neighborhood in which you have a plurality. Thatâ€™s it. While the bidding system is an interesting way to acquire the tokens, the choice of tokens themselves is generally obvious and formulaic.

Unfortunately, that harms the flow of the game. What might have been an area rife with interesting decisions is instead too obvious and feels a little tacked on to a far more interesting bidding system.

Despite these anomalies, Mafiozoo provides a good experience that definitely hearkens back to the classic euro. The rules are easy to comprehend â€“ at least conceptually. Significant strategy and important decisions spring from interactions within the simple ruleset is on offer despite the easy rules. While it doesnâ€™t introduce anything revolutionary to the hobby â€“ or particularly stand apart from its peers â€“ it will appeal to those who donâ€™t need or want extraneous rules or expensive miniatures.