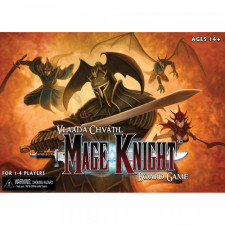 So, how does one not rate Mage Knight five stars? Something along the lines of, â€œThe Holy Grail? Sure, itâ€™s a nice cup, but turns out it doesnâ€™t hold much wine,â€ maybe. Perhaps, like the aforementioned vessel, Vlaada Chvatilâ€™s 2011 game has become a victim of its own fame. It certainly looks good, overflowing with bits, cards, map sections and tokens, but every play I ended up reaching the bottom of the cup too soon.

Up to four players assume the roles of Mage Knights, otherworldly butt-kickers sent to defend the randomized realm from whatever ailment has befallen it in a particular scenario. The initial setup promises a vast array of customized possibilities, from the characterâ€™s deck of action cards to the random map waiting to be explored and dangers waiting to be uncovered. Playersâ€™ actions are governed by a deck of cards that allow for movement, combat, spells and purchasing of equipment or hirelings. Itâ€™s an interesting system which manages to avoid my one deck-building pet peeve: there arenâ€™t any useless cards needing to be trashed in order to progress. Cards can be used to perform actions for which they arenâ€™t intended, albeit at a weaker level, which appears on the surface to satisfy â€œtrueâ€ gamersâ€™ aversion to the randomness of dice, but also introduces two complications: downtime and disbelief.

Mage Knight plays well with two because while one playerâ€™s taking their turn, the other can be staring at their deck and solving the Enigma code that will be their next adventure. Since all cards can be used for something, each action amounts to optimizing cards in hand to get as much accomplished as possible, and the time it takes to do this is about the same amount of time it takes the other player to make their move, so downtime is eliminated. With a maximum table of four, youâ€™d better have some good YouTube viewing lined up while the third and fourth players are solving their riddles because youâ€™re in for a good fifteen minutes of idle time after each of your turns. What about the other players, you ask? Donâ€™t their actions affect you, requiring your attention? Sadly, no, unless the map is narrow enough that other knights take all the good stuff before you can get there, and not even if they turn against you because, to my utter dismay, you canâ€™t be killed.

At first, the wound system got me excited. If wounded, the player got a useless Wound card as one of their five. Get too many wounds and their Mage Knight canâ€™t do anything until healed, but even a handful of Wound cards doesnâ€™t result in death. Neither does a deck full of them. Suddenly, the magic of adventuring through a fantasy world pops like a balloon. Sure, the lore paints your Mage Knight as an otherworldly problem solver, but the same dilemma holds true for your hirelings. They can receive a Wound card and be useless until healed, but theyâ€™re also apparently immortal. This took the air out of the game for me, and makes PvP combat almost pointless. Its only possible purpose is to slow down a competing knight, since even looting their hand for a powerful weapon or spell isnâ€™t as easy as simply buying one of your own from a monastery or looting it from a tomb.

The cards also break the mood by the nature of the draw. While any card can be used as a weak version of any action, as the game progresses and your hero draws near to their goal (usually assaulting a mighty city) having the right mix of cards becomes vital to your success. Itâ€™s infrequent, but not rare enough, to spend several turns outside the contested city trying to draw the correct mix of cards to successfully assault it, theorizing the correct cards to throw away and the odds of drawing the replacements youâ€™ll need to assail the walls on your next turn. And all the while, your target sits calmly behind its moat, waiting for you to determine the time is right for its doom, which brings me to my last popped balloon: the static kingdom.

Mage Knightâ€™s setup is daunting, and initially awe-inspiring as players gaze at the plethora of troops, spells, abilities and locations open to them. The map reveals villages, dungeons, towers, keeps, and marauding orcs, the first hint of the breadth, and lack of depth, of the game. The marauders will attack if you move next to them and then to the side, staying one hex away. Move straight back and they leave you alone. Donâ€™t move near and they sit perfectly still, even though a helpless village may be one hex away. Afflicted with macular degeneration and a seeming lack of pep, these orcs began the slow deflation of my first balloon, since they, like all foes in the game, have fixed attack and defense numbers on their token. Combined with deterministic combat, this yields a world full of monsters that tell you up front which cards you need to defeat them and wait patiently until you find those cards, veering Mage Knight away from Lord of the Rings and toward The Imitation Game.

So whereâ€™s the challenge? The ticking clock. Each scenario has a set number of day/night cycles, and a cycle ends when one player runs out of cards. So wounds can hurt playersâ€™ chances of winning, slowing them down and forcing them to spend actions healing, and early struggles can turn the latter half of the game into a slow march of futility, which some might argue is worse than death, but it also kills the notion of adventuring in a sandbox fantasy world. For those who enjoy a deterministic puzzle, Mage Knight delivers a trove of cards, tokens and choices thatâ€™d make Smaug jealous. But if itâ€™s a fantasy adventure youâ€™re after, seek your Grail elsewhere.