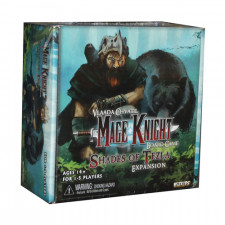 Mage Knight deserves better. As one of its lost legions of rampaging fans, I want nothing more than to give every expansion the 5-star review the base game deserved. Lost Legion was an all-around solid "kitchen sink" expansion that bulked out all the decks and tokens but focused primarily on improving the surprisingly popular cooperative and solo modes of play. A must-buy for fans of the game, it nonetheless lacked the revolutionary, "game will never be the same again" quality that I associate with a top-shelf expansion.

Shades of Tezla takes the opposite tack. While smaller in volume than Lost Legion, its contents provide a much more radical departure in feel, folding in new thematic elements that might please critics of the base game's analytical approach to fantasy. It's so far removed from the spirit of the original, in fact, that it feels more like a collection of fan-created content than an officially sanctioned extension of the game. As with the Krang mini-expansion (which thematically ought to have been included here), involvement from Mage Knight's designer Vlaada ChvÃ¡til was minimal, and the disgracefully perfunctory production suggests that the IP-holders care little about the game's future. (A few examples of the production issues include cards and tokens that are noticeably different in both size and texture, making integration with the base set impossible; a ruleset more full of holes than a spawning ground; lack of reference cards for any of the new sites or scenarios; and a rulebook that is slightly too large for the box and will therefore inevitably arrive squished and wrinkled.)

Even the backstory reads like a bad joke. The original game, with its morally ambiguous Council of the Void and its cataclysmic Breaking, exuded an air of mystery that's been completely diffused by this point. The focus this go-around is on an Army of Darkness-esque turf war between two Manichean factions: the tree-hugging Elementalists, led by the spirit of the great mage Tezla, and the Dark Crusaders, led by some bozo called, I kid you not, Dark Tezla. The Mage Knights arrive in the midst of this mystical rumble and immediately start calculating how to profit from it.

Aside from a new ex-Elementalist druid hero, Braevelar, all of the components in the box support this new dual-faction system. The 3 monstrous enemy types (rampaging and dungeon enemies) now count Elementalist and Dark Crusader loyalists among their numbers. In 3 of the 4 new scenarios, these new tokens replace the faction-less enemies of the same type. They also rise to the defense of the faction leaders, new endboss-style master enemies that replace the base game's cities or Lost Legion's eponymous army.

Mechanics-wise, faction enemies aren't too different from their vanilla counterparts. They make liberal use of combat abilities introduced in Lost Legion, namely Cumbersome (you can spend move points to reduce their attack), Elusive (until successfully blocked, their armor value is greatly increased), and enemies with multiple attacks. Additionally, many Dark Crusaders have the new Vampiric ability, which increases their armor value for every wound they inflict, while both factions have the Defend ability, which boosts the armor value of whichever enemy is attacked first.

The biggest change is what happens when you defeat them: in exchange for a proportionally smaller Fame payoff, each enemy drops a matching faction token. These act like random loot drops and represent potions and one-time-use relics. These change the game significantly; imagine building a collection of free, single-use skills and you have the right idea. The Ice Shard and Fire Gem add elements to one attack or block, and can be combined to create the rare Cold Fire element; and the Vial of Toxin lets you add +3 regular, +2 ranged, or +1 siege damage to any source of physical attack.

Even if you don't find yourself in need of their abilities, you can trade these magic items for favors during interaction for 3 Influence of 1 Fame. That 3 influence can be a life-saver, the difference between an Elite Unit and a wasted turn.The flexibility and unpredictability of these drops give Mage Knight a fast-and-loose feel akin to a more traditional dungeon crawler; they smooth over those moments where you could have won the battle or reached the mine if only you could ignore that one wound with the paralysis ability or somehow get a source of green mana. This leads to a game with less planning and more doing.

Conversely, the faction leaders add complexity to the already complicated city assault process by adding a boss-type enemy that needs to be defeated multiple times and changes its tactics as it takes damage. Like Volkare, these faction leaders are surrounded by a troop of assorted followers, and they also contribute their own attack. Unlike Volkare, the leaders can also be attacked directlyâ€”Volkare simply went poof when you eliminated his followers, while faction leaders have their own armor values and resistances to overcome. In fact, you can defeat a faction leader without killing any of its followers, though you'd be missing out on fame and faction tokens.

Like cities, faction leaders have levels that determine which tokens come to their defense. However, they also have a unique combination of attacks and defenses for each level. Meet a faction leader's armor value with your attack, and you knock it down a level at the end of the combat. The next time you fight it, you'll use this new, reduced level to decide the leader's attack and defense. You can even take a leader down by several levels at once if your attack hits a multiple of its armor. However many combats it takes, you can only defeat a faction leader by bringing it all the way down to level 0.

The other new mechanics come from the scenarios themselves. The big one, Life and Death, splits the map down the middle with Elementalists in the South and Dark Crusaders in the North. It also turns Mystic Glades (and their blighted counterpart, Graveyards) into a new adventure site for you to liberate for a chance to earn the "Faction's Greatest Enemy" title. The Hidden Valley is a blitz-paced, ranch-flavored scenario that uses the Elementalist faction only. Rampaging enemies gain Ambush, which means they can attack you from 2 spaces away. This is actually good, since defeating them allows you to explore a new map tile for free, while the scenario rules triple the cost to explore the normal way. The Realm of the Dead is the Dark Crusader take on this scenario; here, the rampaging enemies gain Pursuit, which causes them to roam the map in search of blood. Finally, The Lost Relic is a 2-round scenario that uses none of the components in the box. Instead, it introduces a drafting-style quick-start variant that starts players at a higher level.

All of theseâ€”the accelerated start rules, Pursuit and Ambush abilities, faction tokens, and faction leadersâ€”are fun and interesting additions to the game, but they fail to come together as a cohesive expansion. Volkare totally change the game, but only for cooperative players, while these scenarios all feel like "standard conquest with variants" (or worse, "walkthrough to the rule changes"). This is not an expansion, it's a box of variants.