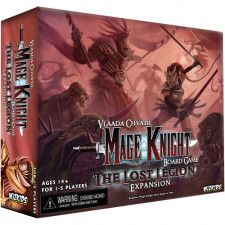 Let me explain. Mage Knight is the ultimate fantasy adventure in the same way that 2001: A Space Odyssey is the ultimate sci-fi movie: one part detailed simulation, one part sprawling epic, and a dash of space baby weirdness. While I'm fully aware that the game becomes unplayable as it approaches its maximum player count, nothing else delivers the dizzying logistical puzzle that each hand of cards provides, the ability to mull over options for five straight minutes and have that search actually mean something, the eureka moment when I arrange things just so so that I can block the elder dragon's attack and defeat it in a single turn.

But this review is not of the Mage Knight base game; it's of The Lost Legion, Mage Knight's first and (so far) largest expansion. That means I have to judge Lost Legion as an expansion, independent of my opinions about the base game. I have to ask, objectively, how much it actually improves an already groundbreaking game.

Digging through the expansion's plentiful parts list, it's clear that neither designer Vlaada Chvatil nor publisher WizKids expected Mage Knight's explosive popularity among solitaire and co-op crowds. Roughly half the box is exclusively dedicated to expanding the non-competitive game modes (which, to be fair, were pretty limited in the original scenario lineup).

Lost Legion's three new cooperative/solo scenarios send a clear message, and that message is "Oh sh*t, we thought we made a competitive game. Our bad." The new Cooperative Skill tokens, recplacing the Competitive Skills in co-op (which were previously just removed from play), back up this message. These co-op skills open up new possibilities for teamwork: once per round, you get a big benefit on your own turn, and then somebody else gets a little benefit on theirs, as long as they take it before your next turn begins. The skills also work in the solo mode, providing their secondary benefit on the turn after they're played.

However, the focus of the expansion is clearly on General Volkare, star of all three new scenarios. General Volkare functions like a walking city: surrounded by an army of orcs, draconum, and a few city defenders, he marches across the map one hex at a time, acting as game timer and attacking opportunistically if the players venture too close.

It's not just mobility that sets Volkare apart from your standard city assault. Facing up to three draconum, six orcs, and two white tokens simultaneously is the stuff of nightmares, but the silver lining is that, unlike cities, General Volkare does not provide his troops fortifications. At the same time, spells and advanced actions that were previously the backbone of your assault strategy will be useless against Volkare and many of his troops thanks to the Arcane Immunity ability Lost Legion introduces. Enemies with this icon can't be affected by any non-combat, non-defense abilities: no Earthquake, no Mass Expose, no cheap tricks of any kind will work against these bad boys. Mage Knight veterans should be prepared to completely reevaluate their strategies and upgrade choices.

The first new scenario, and its blitz version, replaces the classic Solo/Cooperative Conquest. In these scenarios, Volkare replaces the standard Dummy Player and the final city, and the change is for the better. Instead of putting a leash on round length, Volkare pressures the players the same ways a real opponent would. He explores new tiles, initiates attacks against the players, and makes a beeline for the city; if he's allowed to conquer it, you lose. To win, the players must defeat the entirety of Volkare's Lost Legion, usually as they defend their conquered city against Volkare's relentless assault.

Playing against Volkare is unquestionably more authentic to the Mage Knight experience than playing against the Dummy, even the antithematic strategy of revealing the city tile as far away as possible from his current location. It's better, but it doesn't feel all that newâ€”it's basically standard Full Conquest with better AIâ€”and the third scenario is pretty much the same deal in a different direction.

There are two things that make Lost Legion an obligatory purchase, even for competitive players. One, it provides a second unique card for each Mage Knight's starting deck, giving each character a more distinct feel and a slight power boost. Two, there are a handful of new map tiles with new features like Labyrinths and Walls. Labyrinths are a push-your-luck adventure site, while Walls provide wrinkles to rampaging monsters and fortified sites...but really, just having a few more tiles is a godsend, especially in larger maps.

Meanwhile, the additional playable Mage Knight, the 16 new Units, the 51 new enemy/ruin tokens, and the 24 new Deed cards add bulk and variety to every conceivable part of the game. And while they are all cool, introducing new ways to use Influence or Movement, new implications for the Reputation track, a new place for recruitment, and several new enemy abilities that complicate the Block and Assign Damage phases of combat, I wouldn't really say that any of them improve the game in any significant way. They simply provide more of it, to the same level of quality.

Mage Knight is the ultimate fantasy adventure game, but Lost Legion is not the ultimate expansion. It does its base game justice, but aside from a few must-have features that feel more like fixes than innovations, this hefty box merely expands outward, not forward.