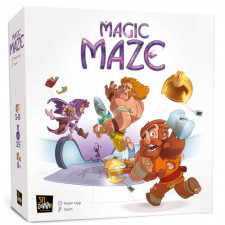 â€œAfter being stripped of all their possessions, a mage, a warrior, an elf, and a dwarf are forced to go rob the local Magic Maze shopping mall for all the equipment necessary for their next adventure.â€

This line sounds like the setup to a joke, but itâ€™s actually the premise of Magic Maze â€“ a real-time cooperative game that was nominated for (and, in my heart, the winner of) the 2017 Spiel des Jahres award. In three minutes, you need to get all four of your heroes to their preferred store and then exit the mall, without getting caught by security camera or guards. Yes, these fashion-conscious heroes are also apparently petty thieves. Just go with it. The game is much better than its backstory.

Mall shopping is not for the faint of heart.

At the beginning of the game, there are a few tiles that make up the unexplored mall. Everyone at the table receives one action tile, indicating a direction. Although everyone can move any of the heroes, each player can only move them as many spaces as they want in one direction at any time. Each hero needs to get to their color-matching store and then out their color-matching exit. Play is simultaneous and starts when the hourglass gets flipped over. New tiles expand the board when heroes land on the exploration space of the matching color (e.g., the orange dwarf lands on the space with an orange magnifying glass). Subsequent tiles will add the shops and exits that the heroes need to get to. The game works like a giant slide puzzle where moving one piece allows the rest to slot into where they need to go. Sounds easy enough, but hereâ€™s the thing: you cannot communicate with one another. No talking, no gesturing, no head tilts, and no eye blinking Morse code. Nothing. Now that three-minute timer seems a bit more challenging. Outside of being allowed to â€œstare intensely at another player,â€ as dictated by the rulebook, there is one other thing to help coordinate. Enter: my favorite component of all time, the oversized red wooden pawn named the â€œDo Something!â€ pawn.

The only way to communicate with your teammates is by grabbing the â€œDo Something!â€ pawn and emphatically tapping it in front of another player. As they stare at the maze of tiles on the table, trying to figure out where youâ€™re telling them to go, you knock that â€œDo Something!â€ pawn harder on the table, making enough commotion that the dog thinks someone is knocking at the front door. Itâ€™s easy to get angry at your teammate for not seeing what is so clearly obvious to you, but donâ€™t worry. Youâ€™ll be on the receiving end of the â€œDo Something!â€ pawn soon enough, fighting the strong urge slap your significant other if they bang that stupid thing in front of you one more time. Sometimes, the player you put the pawn in front of disagrees with what they think youâ€™re telling them to do and immediately slams it in front of a different player. This can go on for some time, like some kind of Three Stooges bit. If only you could talk juuust a littleâ€¦ 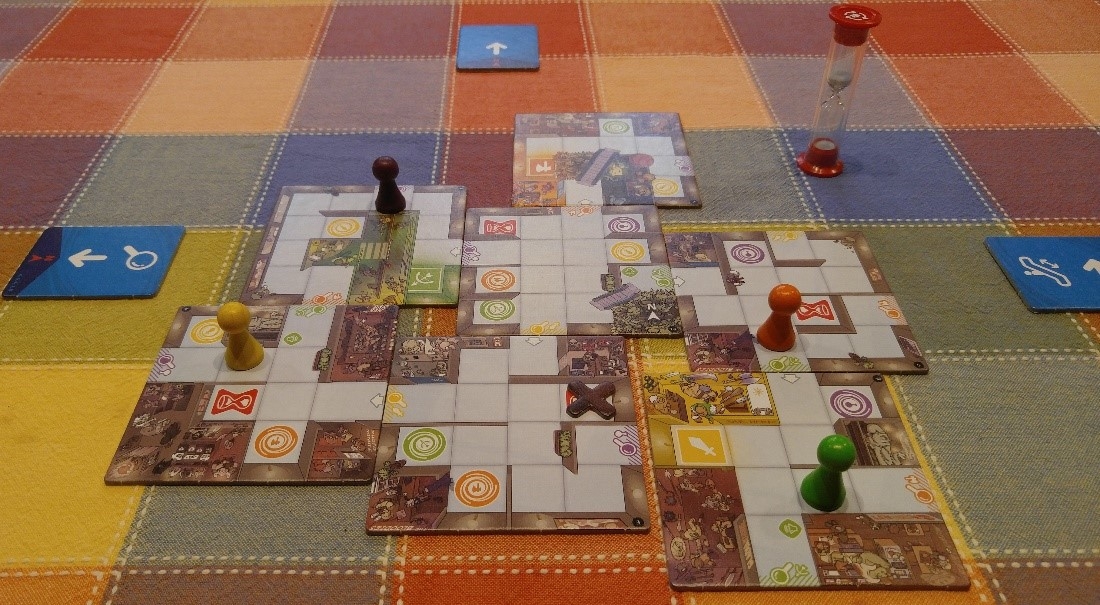 That sand timer is absolutely out to get you.

On some tiles, there is an hourglass icon. Moving a hero here flips the sand timer, resetting that precious clock. When the timer is turned (and youâ€™ll wait until the near-to-last speck falls), you can talk as much as you want. This provides you with a brief respite to share your strategies, point out where to go next, and maybe throw in a snarky little chastisement too. However, as soon as you start moving, itâ€™s quiet time again and the game continues as before. Once the craziness resumes, those carefully crafted plans fall by the wayside. Itâ€™s easy to lose track of your turn to move a hero when youâ€™ve been concentrating elsewhere. Or maybe you forgot what the plan was altogether. To make things more complicated, certain directional tiles in front of players have abilities, such as being able to take an escalator or use a vortex (instantly moving a hero from its current location to a vortex of its matching color). The advanced rules also require you to rotate the directional tiles after each hourglass flip. You now have to fight your muscle memory of moving guys north when now you can only move them west. You also have to remember that youâ€™re now in charge of flipping new tiles, which the rest of the table will kindly remind you of with the red pawn-shaped blur in front of your face.

The speed of Magic Maze is exhilarating. When you lose, you want to give it one more try. When you win, your pride makes you think youâ€™re ready to ramp up the difficulty. There are tons of scenarios that add more challenges and complexity. Just when you start to feel like mall royalty, things like hero special abilities or new permanent rules are added in. The franticness of real-time and the communication limitations are absolutely what make the game so entertaining. However, because it is so easy to make mistakes, some will be eminently frustrated by this chaos whereas others will embrace it. Sometimes, the game will feel ridiculously easy and, at other times, annoyingly difficult. It doesnâ€™t matter though because itâ€™s hard to be mad at a game that is as delightfully absurd as its premise.