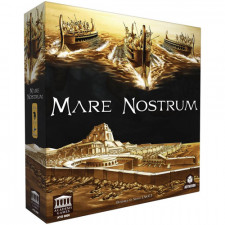 CT: Mare Nostrum: Empires is the second recent Academy Games Kickstarter release that hearkens back to old waters, unearthing an out of print game and revamping it for the modern age. While I may not have any experience with the original Mare Nostrum, I canâ€™t help but be impressed with this heavily streamlined civilization game. Weâ€™re talking 3-5 players with economic expansion, cultural development, and military conquest all in about 90-120 minutes. Thatâ€™s like the holy grail of contemporary civilization-style design.

CC: Mare Nostrumâ€™s streamlining is definitely its key feature, and Iâ€™m most impressed with how fast the production/trading portion of each turn moves, while still giving the feel of managing a unique civilization. Civ games these days seem to focus on shaving down each X except eXploit, but Academy Games manages to buck that trend while keeping the sense of geographical diversity so essential to world-building. Is there a single aspect of its streamlining that stands out to you?

CT: Iâ€™d say more of a methodology than a specific element. Combat, economy, and culture are all exceedingly simple and easy to understand and command. The beating heart of Mare Nostrum is that these systems facilitate meaningful player interaction. From the really unique and stellar trade system to the simplistic combat, itâ€™s about maneuvering around the other players at the table. This is game where youâ€™re playing your opponents and not the mechanics. 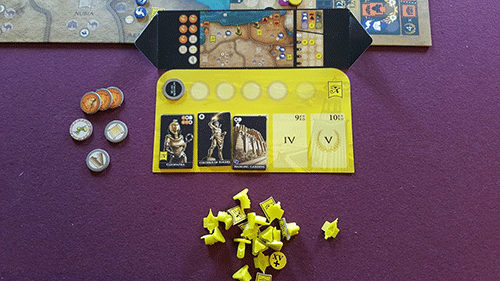 CC: Very true. The impressively short and tight rules allow players to get right into the meat of the game without having to master a dozen different mechanics or turn phases, but itâ€™s not reduced to the point of abstraction, thanks in large part to the recruitment of heroes and the construction of wonders, adding flavor to your Empire while they propel you to victory. Whether youâ€™re pursuing a strategy of peace or war, economy or expansion, youâ€™ll find an ancient hero to aid your cause.

CT: Yeah, the small inclusion of a randomized allotment of heroes and wonders you can buy every game adds variety and a touch of depth and exploration beyond the base structure. Whatâ€™s interesting also is how these tie into the multiple paths to victory.

This is very much a pretty standard take turns building and moving about a board, but the game strips out a tech tree and instead focuses the paths of victory down several lanes. You can go for military conquest by sacking four cities, lead in the gameâ€™s culture/economy/military tracks which represent building and development, acquire five heroes/wonders, or build the mighty pyramids. All of these options feel distinct yet dovetail nicely into the core functions of the game and donâ€™t feel tacked on in any way.

You mentioned the multiple paths to victory, and the gameâ€™s balance creates many opportunities for strategic adjustment. By playing the other players, as you said, a shrewd leader can spot which path is open to them and which have been closed off by their rivals, with these options changing several times as the game progresses. 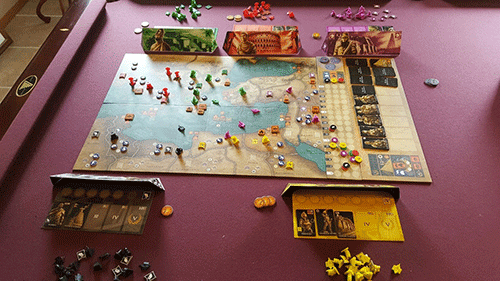 CT: Yes, thatâ€™s it: the feel of the game is very dynamic and lively. Many civilization games get bogged down and drawn out with a pace akin to their Sid Meier PC counterpart, but everything moves so quickly here that you must get up and running and in the fight. You canâ€™t dawdle and this keeps the pressure present and introduces an element of tension similar to a race. You have to push forward even if someone else is standing in the way.

CC: Youâ€™re exactly right. Combat offers players the opportunity to race across open ground, build a wall, break through an opponentâ€™s defense, or sail around it, and its most complicated aspect is math involving Roman numerals.

Mare Nostrum: Empires takes all aspects of an epic civ game, strips away their excess to reveal an optimized core, and deliversâ€¦well, it just plain delivers. Take note, game developers. The fast and deep civilization grail has been found.