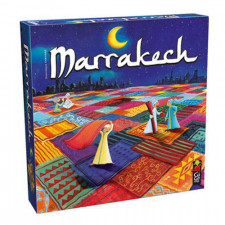 Marrakech is a lovely family game designed by Dominique Erhard, a designer better known in the US for his poker-influenced Condotierre and the Mediterranean trading game Serenissima. But heâ€™s also done a number of European family games and this one, published originally in 2007, is one of his more charming and delightful designs- even if it feels somewhat slight by hobby standards.

But â€œslightâ€, is relative. Sure, there is only one page of rules, but Marrakech plays like one of those oh-so-clever designs that youâ€™d expect from someone strongly influenced by Sid Sackson and Alex Randolph. The concept is that each player represents a rug seller in a crowded Marrakesh marketplace attempting to put the most rugs on display in order to have both the most product on the market as well as the most money in hand by the end of the game. The components are colorful and adorable- each player has a stack of actual, miniature textile rugs to place on the board and Assam, the market owner, is represented by a little wooden figure.

The process couldnâ€™t be easier. On your turn, youâ€™ll decide which direction you want Assam to walk, but he can only be turned 90 degrees from where he is facing. Then you roll a die and move him however spaces. If he lands on an opponentâ€™s rug, you have to pay that player money based on the visible surface area of all the rugs of his or her color. 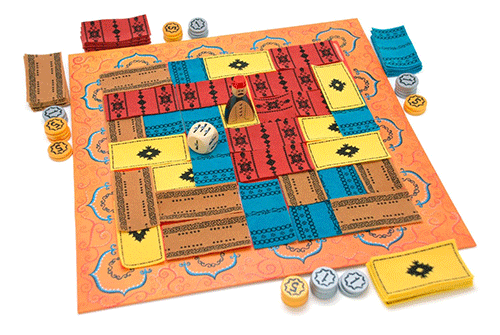 And laying those rugs is the second part of your turn. Each go, you get to lay a rug out adjacent to where Assam is standing with the rules being that you cannot completely cover up another playerâ€™s rug, but you can cover up any empty squares or half-rugs you like. So what happens over the course of the game is that the rugs layer each other as the vendors try to keep as much of their color visible as possible. At the end of the game, all of your partially and fully visible rugs are accounted for in your score along with the money youâ€™ve made from Assam stopping on your goods.

Thereâ€™s quite a bit going on here in terms of decision-making that may not be immediately apparent. Youâ€™ve got the choice to turn Assam or let him walk on, and there is the consideration that the board has turnaround points around the edges so he might wind up in an unexpected part of it after the die roll. Deciding where to lay rugs to gain the most coverage or to block other players is critical, and the board is always in flux so the value of placement changes dramatically over the course of a round.

Still, itâ€™s hardly Die Macher. This is a very light, very fun game with plenty of accessibility and kid appeal. Itâ€™s also a great example of the kind of easy-going, good-natured design work that was more popular among European designers in the 1980s and 1990s. Those yearning for the days of the classic â€œGerman gamesâ€ might be quite pleased with this somewhat under-appreciated title.