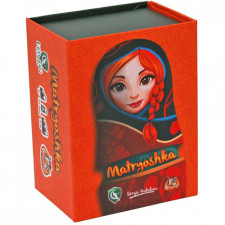 Someone in my family had a matryoshka doll. Or, well, a whole bunch of them, nested together until you set them free with that memorable little pop. Maybe it was my grandmother on my momâ€™s side. Or was it just my mom? I donâ€™t know. Somebody. It was red.

And thatâ€™s the extent of my personal connection to Matryoshka.

In the game, youâ€™re a collector of Russian nesting dolls. Wait, let me finish. Youâ€™re a collector of these beautiful little things, but you donâ€™t have a matching set. Just a mishmash. Big ones, little ones, dolls of various colors and clothing and ethnicities. But in order to become the most powerful collector of all time â€” the prophesied matryoshka bobyshka â€” you must meet up with a bunch of other collectors and start swapping out dolls like theyâ€™re ill-fitting underpants.

At first glance, Matryoshka resembles any number of set collection games. Complete clutches of dolls are worth a lot of points, as are different sizes of dolls. Naturally, sets of the same doll are both harder to compile and worth more points than a mere handful of big dolls or little dolls, but chances are that youâ€™ll need to pursue both in order to crown yourself the king of collectors.

Where Matryoshka drags out the mold to give it a good smashing is that itâ€™s actually a game of negotiation, every bit as catty as one might expect of a group of Russian nesting doll collectors with their magnifying loupes and doll-measuring calipers. First of all, each of the gameâ€™s four rounds opens with everyone displaying a portion of their current collection. On the one hand, this is a way of signaling your wares and what youâ€™re looking for in return; on the other, itâ€™s also a bit of a bluff, concealing nearly-completed sets in your hand so that nobody can prevent that final doll from slipping into your grubby fingers.

This last part is unexpectedly crucial because of what comes next. One at a time, each player offers a single face-up doll. In response, everyone else hands over a face-down doll as a potential trade. The particulars are concealed from everyone but the pair who finally make a swap, but thereâ€™s an entire language being spoken in that moment. If you see a doll that somebody else needs, for instance, itâ€™s entirely possible to bid with something that will appeal to the dollâ€™s seller, then twirl the twined ends of your waxed moustache like a Russian aristocrat gazing down at his serfs at the fresh leverage you now hold over one of your rivals. Or, if someone offers something juicy, persuade everyone at the table to offer garbage in return. Or just go all-in on something nice and pretty and hope it works out in the end. 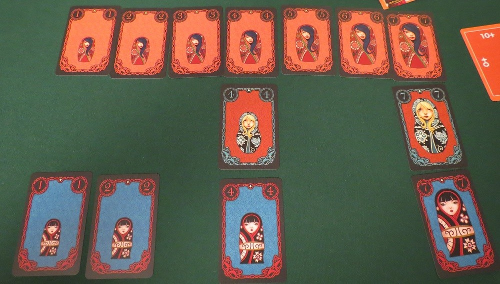 This emphasis on jawing your way into having the best collection is what sets Matryoshka apart from any number of its peers, though this strength is naturally dependent on your ability to get everyone talking. Without an unhealthy dose of cajoling, wheedling, and deception, Matryoshka returns to its origins as a visually appealing set collection game. This isnâ€™t to say that itâ€™s bad, not in the slightest. Uninspiring, perhaps. But the game itself was built upon the foundations of petty haggling, from the way each round increases the size of your displayed collections to the way your hands grow slimmer, forcing you to reveal more while working with less. As the deceptions are peeled back and everyoneâ€™s plans become more apparent, the game squeezes you with velvet-gloved firmness, making each swap that much more desperate.

And all for dolls.

Itâ€™s a rare sort of game that can get me invested in the trading of something like little dolls that slide into one another, but Matryoshka manages to pull it off. Its light take on negotiation makes it perfect for groups or families who arenâ€™t afraid of injecting the tiniest bit of rudeness into their evening.