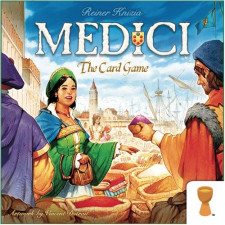 Critical Misses: It's a spinoff and not an all-new Knizia design.

Card game and dice game conversions typically arenâ€™t my bag. They often promise a short, interesting take on an established classic using a Yahtzee mechanism for a dice game version or some kind of new twist for a card game version. Yet they usually fail to capture whatâ€™s great about the game theyâ€™re trying to emulate, and end up dragging on just as long as the full game. So why would I even bother when I could just experience the original for a little more effort? By way of contrast, Medici: the Card Game is every bit as good as its older brother, substituting pure push-your-luck for its forebearâ€™s tight, tense auctions.

Mediciâ€™s card game spin-off gets away with its pared-down design because it doesnâ€™t bother trying to replicate the perfect auctions of Medici. It rips the mechanism out entirely and replaces it with a very simple, very clean push-your-luck system. This is also present in the base game, but itâ€™s used just for building the auction pot rather than deciding who gets to pack the lot on their merchant ship and make a bundle of cash. The rest of the card game is just the deceptively simple scoring system, left mostly intact from its parent game system: try to get the highest value ship each day, try to get more of each good than your opponents, and try to stack up one or two goods as much as you can to snag a sweet bonus each round. 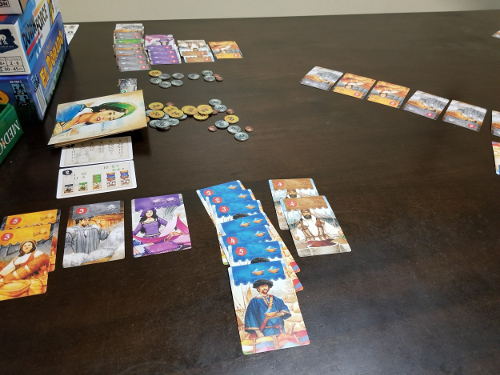 Iâ€™m all tangled up in blue.

The turn-to-turn mechanism driving the action works like this: you get to draw up to three cards, one at a time. Then you get to pick from the last three cards on the riverâ€” but you have to take the last card you draw. Ah, what sounded so simple is suddenly stuffed to the gills with tension and excitement. The game plays on that eternal human flaw of desiring the next big thing. Youâ€™ve got a good enough lotâ€”but hey, man, just one more flip from the deck and youâ€™re sure to have the best haul the Mediterranean has ever seen. Of course, more likely youâ€™ll draw the only card in the deck that wonâ€™t improve your stores and youâ€™ll end up filling your hulls with junk.

Itâ€™s a simple, brutal mechanism that respects the board gameâ€™s legacy while stripping out the auctions that donâ€™t work in the context of a light, filler card game.

Early turns of the game are typically Knizian: a blank slate. Go for wheat, go for spices, go for textiles. It doesnâ€™t matter as long as youâ€™re trying to grab a high-value card or two to boost your chances of taking the dayâ€™s value bonus home. But as other playersâ€™ ships begin to take shape and you start to look around the table in later rounds to see what you have a shot at winning and what goods youâ€™re totally locked out of, each decision becomes that much more significant. Knizia is the master of games with unique pacing and dynamics, and Medici the Card Game is no exception. 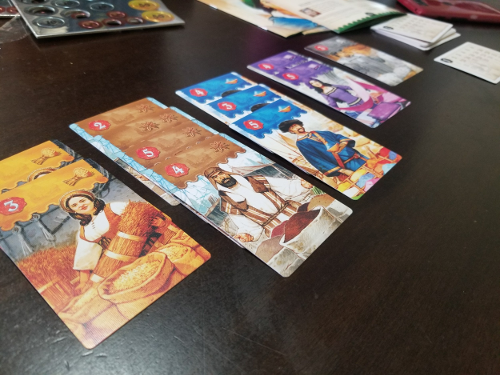 The Medici family would be very impressed with my warehousing prowess.

The game plays well at all counts, with two-player becoming a tight duel that wonâ€™t be decided until the last barrel of cargo is loaded and the lady selling textiles sings, and higher player counts becoming a cutthroat contest to get any points at all. The cards are bright and colorful, easy to read from across the table for tallying up each of your opponentsâ€™ totals when it comes down to the wire. The player aids arenâ€™t that helpful, lacking any labels for each of their various scoring categories and columns, but youâ€™ll have it internalized after one 20-minute-long game, at which point youâ€™ll leave them in the box to save table space anyway.

Even though itâ€™s a distilled version of a 22-year-old auction game, Medici: the Card Game is one of my favorite games of the year. Tight, brutal, and fascinating, it will have a place in my collection for a very, very long time.