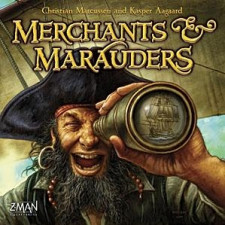 There are some games that so profoundly define how a setting should be implemented that they command the attention of the hobby game industry, but they are few and far between. Prior to the release of Merchants and Marauders, from Z-Man Games, there really wasnâ€™t a game out there that truly defined the classic pirates setting, despite many titles attempting to do so since the old Avalon Hill title, Blackbeard. Merchants and Marauders not only nailed it, but it literally raised the bar on what a piracy game could be. It is an exceptionally well-designed game, with a perfect blend of luck, strategy, and player-versus-player action. I count it among the best games Iâ€™ve ever played, in fact. It truly exudes the feeling of being on the open ocean, buying and selling cargoes and delivering devastating broadsides to an opposing nationâ€™s merchants. In short, it is the best pirate game ever made, period, despite it using a victory point system to determine the victor.

Not only does the design make this game a winner, the components and art seal the deal completely. This game looks outstanding, with a big, colorful board and large, detailed ships, which really helps get you into the feeling. The only thing that could make this better would be to play on the beach so that you could smell the salt air whilst launching deluges of chain shot at a French Man-O-War. With variable player powers based on their chosen captain, a host of purchasable ship upgrades and crew, and a dynamic, event-driven game state complete with side mission quests, you will never play it the same way twice. The best part of the game is not that everything works, it that everything works flawlessly, and despite having a strong setting, there isnâ€™t really much filler in the game at all; everything is there for a reason.

The core game is a hybrid economic game, of sorts. You can play the game as a straight merchantman, buying low and selling high by watching the market, avoiding other playersâ€™ attempts to attack you and steal your precious cargo. If youâ€™re into pick-up-and-deliver style games, this is a no brainer. But, unlike other games of the ilk, such as Merchants of Venus, there are political realities which affect you. For example, if youâ€™re a Spaniard, and the Spanish are â€œat warâ€ with the French, then you are unwelcome at French ports. If you raided an English ship and earned yourself an English bounty, not only will you potentially be hunted by the English, you are unwelcome at English ports. Obviously, if youâ€™re not attacking people, you will not get bounties, generally, but when it comes to the state of war between nations, sometimes youâ€™ll be headed to a port that has a high demand for your cargo, but before you get there, war will have broken out, devastating your plans to cash in big.

The reason the economy works so well is the card-based supply and token-based demand system that governs playersâ€™ ability to make a profit. When you head to a port, if you wish to buy cargo, you draw six cards to determine what is available. The more of any given item that was drawn, the cheaper it is; if you draw three cocoa cards, then each costs one doubloon, but f you drew only one, it costs three doubloons. All cargo can be sold at any port for three doubloons, but the portâ€™s demand token will allow you to sell the cargo in demand at the port for six doubloons. It works really well, but what really makes it shine is that when you sell three of the in demand items at a port, you not only make eighteen doubloons, you gain a Glory point, the victory points of the game, and a Glory card, which provides you a special bonus when played, and which can be played at certain times.

Combat is brisk and deadly, but if I were to have to call out one weakness in the game this is it. Itâ€™s slightly more convoluted than it really had to be. It involves adversarial die rolling, a bit of math, a lot of special exceptions based on player powers, cards, and upgrades, then more rolling to determine hit locations. Itâ€™s not tedious; itâ€™s quite intense and compelling, but itâ€™s just too many little fiddly rules to remember and take into account for my tastes. The good news is that itâ€™s not bad to watch as an observer, secretly hoping the player with the most Glory will go down with his ship. Yes, I said that right: in Merchants and Marauders, your player can die. If youâ€™ve spent half the game working your peg leg off to get Glory points, and then you roll badly, you will be killed and have to start again with a new captain. This game handles player elimination better than any I can remember, because while you lose all of your possessions, you retain all of your Glory, and better yet, if you stashed gold at your home port during your career, your replacement starts with all of that gold. So, itâ€™s a great catch-up mechanic, and even better, one that actually makes sense.

At the end of the day, I can go on and on about the merits of the game, and itâ€™s because the game is 100% Grade A bad ass. There is simply no other game that captures the setting better than this, and furthermore, the incredibly tight design delivers a sense of urgency that keeps players from simply sailing around, amassing wealth and upgrades, making a two-hour game into a ten-hour slog. There are very, very few games that I would call â€œauto-buyâ€ out loud, but this is one of them. Read the rules, because if you can tolerate a bit of complexity, then this game will blow your mind.