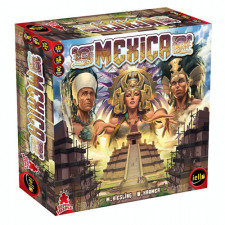 I love that we are living in an age where the great German games that have fallen out of print from the late 1990s and early 2000s are coming back. I love having a chance to reconnect with the kinds of designs that those newer to the hobby might never have had a chance to play. Vintage German games can be just awesome as whatever the next Kickstarted box full of plastic miniatures is for this week. And the â€œMask Trilogyâ€, designed by Wolfgang Kramer (Mr. El Grande himself) and Michael Kiesling are great examples. All three have some unifying principles, chief among them the use of an action-point based system offering players a menu of options upon which they can spend them each turn. Tikal is probably the best known and best loved of this trio, with a cool archaeology concept, and the more agrarian Java was the deepest and most complex. Mexica is somewhere in between the two, but it is in my opinion the most confrontational and competitive of them.

Iello in conjunction with Super Meeple have just put out a lovely new edition of Mexica with great illustrations, heavyweight resin pieces and a rulebook that goes to almost exaggerated lengths to get this fairly abstract game to tell the story of an Aztec civilization partitioning off a South American island with canals so that the leadership can build temples on it- all in order to found Tenochtitlan. Nothing other than physical components and illustrations have changed since the game was first made available in 1999, and 17 years on it has a timeless feel not unlike the better Knizia titles. The rulebook probably tries too hard to over-explain everything, but this is a simple and accessible game that I think those interested in this phase of the European game design idiom will enjoy.

The board is an irregular grid depicting an island in Lake Texcoco. There is a palace near the center and a couple of dugouts already built. On your turn, you get six action points to dig out canals to cordon off sections of the map, build temples, construct bridges, and move your Pilli Mexica (a meeple with a fabulous hat). There are a number of Capulli tokens available, and if you manage to partition off a section that matches the number of spaces required on one of the Capulli tokens, you put it in the newly founded district and earn points. Once districts are founded, you want to get your Pilli Mexica into districts so that you can order temple construction. These are the big, chunky resin pieces valued at one through four. At the end of the round- once all of the Capulli tokens are claimed and someone has placed their allotment of temples- the districts are scored. Whoever has the most temple value gets big points, whoever has second most gets medium points, and whoever has least gets small points.

Obviously, there is a lot of El Grande in this design but the player-ordered construction of districts and the more stable action point system make it feel very different. Whereas El Grande had the big King pawn that moved around and affected his region, Mexica has each player controlling a critical on-the-board pawn. Moving the Pilli Mexica around to found districts and construct temples is an overarching concern throughout the game, as is constructing bridges so that they cross over the canals.

But one of the more critical differences with El Grande is that Mexica is a game of placement and blocking. Every piece locks down the space it is in- no moving on or through. And a piece layed, as far as temples and Capulli tokens go, is a piece played. They stay there forever. So you can place temples to willfully block access to districts via bridges. You can â€œattackâ€ a valuable district by filling up as many spaces as possible with temples. Or you can hem in a rival Pilli Mexica by building around him. Fortunately, the Pilli Mexica have some special mobility options, including a â€œteleport anywhereâ€ move that costs five AP or they can move from bridge to bridge- provided that the established waterways connect them- for an AP.

So the aggressive part of the game doesnâ€™t result in material loss, it results in incurring additional costs that over the course of the game can put you at a severe points deficit. Having to spend five actions to get out of a bind stinks because thatâ€™s a potential district foundation or five points worth of temples that you could have placed. Fortunately, one of the actions available is to bank up to two action point for a future turn, so if you get into a jam you might have a little recourse by way of a six or seven action point turn.

The game goes for two rounds with an interim scoring for the first set of districts built. At the end of the second, everything scores including unfounded districts. Thereâ€™s also a bonus during each phase- five points- for anyone that manages to get their Pilli Mexica back to the central palace before scoring.

Itâ€™s about an hour and it plays just as well with two or three as it does four, which isnâ€™t common among area control or majority games. The common complaint among all three Mask Trilogy games (and action point-driven games in general) is that the â€œotherâ€ kind of AP is an issue- analysis paralysis. Iâ€™ve not found that to be as much of a problem in Mexica as it is with Java or Tikal, mainly because I think that overall this is a simpler, more direct design. You might catch yourself or another player trying to work out how to get that 13 point, 13 space district lined up on their turn, but itâ€™s not too painful.

Itâ€™s a classic German game. Not quite of the same stature as something like Tigris & Euphrates or El Grande, but it is also somewhat lighter and more immediate than those games (which were at one time considered â€œheavyâ€ Eurogames). Iâ€™ve enjoyed getting back to Mexica. After my first couple of turns, it all started to come back to me and I was like â€œoh yeah, this was a really good oneâ€.