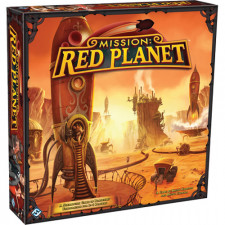 Steampunk is no longer a fringe presence in board gaming. It may not be as commonplace as zombies, fantasy or trading but titles with gears and corsets and automatons have been significantly on the rise. The setting explores wonderfully complex and nuanced leitmotifs of the human condition, yet board games typically resort to the genre for its stylized sci-fi and brassy color palette. The â€œDesigning Brunosâ€ â€“ Faidutti and Cathala â€“ delivered a steampunk game a decade ago, before all the cool kids were doing it, in Mission: Red Planet. It was a great board game, though not necessarily a great steampunk game. Fantasy Flightâ€™s second edition, though, enhances the genreâ€™s elements while maintaining its brilliant game play.

This unruly yarn tasks you with managing a mining company exploiting the fourth rock from the sun. Beating your competitors to valuable resources requires boldness and dastardly scheming. Mission: Red Planet combines area majority and secret role selection. Each round, you vie to board rocket ships destined for particular regions of the titular planetoid. A rocket generally indicates in which region it will land and how many astronauts it carries. As one reaches capacity it blasts off and is replaced by a new ship on the launch pad. After three designated rounds you score each region by awarding points in the currency of resource tokens based on area majorities.

Without further elaboration this all sounds like an orderly and controlled affair. Rather the experience is more akin to the studioâ€™s eruption every time Jerry Springer announces the babyâ€™s daddy. Thatâ€™s because of the gameâ€™s second mechanic, which is a bit more ill-behaved. Each turn you choose a role that gives you ability for that round. All of these allow you to place one to three astronauts aboard one or two spaceships. However, they all have unique powers that can violently spin gameplay until it has its own gravity pulling players in like deorbiting satellites.

Some are seemingly mild like letting you move astronauts about Mars, draw discovery cards, or simply pile a bunch of spacemen aboard one rocket. Those change the game, though, in subtle ways that become rather blatant as their effects crescendo. Plus those aforementioned discovery cards might completely unbalance how a region scores at the end of the game. Other roles outright disrupt play like phasers set to kill. You can pick off other playersâ€™ astronauts, switch one with your own, and even blow up an entire ship.

That interaction is the gameâ€™s beating heart, creating a dynamic, tense, often hilarious and wild action-packed romp. Every player is invested in the game at all times. It can be chaotic, but itâ€™s driven by player decisions rather than unmitigated randomness. Though very much impactful, the spite is allayed somewhat through its quirky setting, lack of downtime and a session length thatâ€™s just right. All that and its limited role selection. Once you play a character, you cannot play it again until spending a round with the Recruiter. He allows you to collect previously played roles so that they are available again in subsequent actions. Youâ€™re not able to kill off opposing astronauts turn after turn, ad nauseum. And the non-spiteful roles are too beneficial to ignore, as well.

Beyond its excellent game play Mission: Red Planet always exuded a charming steampunk spirit of competition in true robber baron fashion. While untold titles possess player interaction, Faidutti and Cathala imbue their design with signature mischievousness. Using the Saboteur and Femme Fatale to knock out opponents makes some sense within its themed setting, but also smacks of the sentiment that Iâ€™m doing this because the mechanics say I can. Itâ€™s not interaction for interactionâ€™s sake or simple contests over spaces on the board. Thanks to its secret selection nature, thereâ€™s a deviousness that both engages you and then makes you feel guilty. Or maybe not.

While the stylistic artwork always fleshed out the setting, the second edition enhances its steampunk vibe even further by incorporating one of the genreâ€™s most important commandments: thou shalt always blend aesthetics and functionality. Everything is beautiful from the illustrations, color schemes and amazing astronaut meeples. But beyond appearances, the Mars board pieces together well and is round â€“ like a planet â€“ with a separate orbiting Phobos. The puzzle-fitting launch pad is always the size you need it to be. The meeples make referencing area majority easy at a glance. The gauge-patterned turn tracker works brilliantly. So while it may not address much of steampunkâ€™s iconoclastic ideals beyond its dastardly behavior, it all very much feels steampunk.

Some may quibble, or worse, about the discovery cards upsetting endgame scoring. Admittedly it is that arbitrary. But this is steampunk, which has always been a bit avant garde in challenging norms. So why not throw a cog in the typical works of area majority? Really the more problematic issue is that the new 2-player variant is mediocre. Aside from that Mission: Red Planet is a breeze to teach, deceivingly smooth, brisk and infectious, lasting just as long as it should. Its spiteful nature is tempered by more endearing qualities. The whole package is quite a unique experience. Youâ€™ll be hard-pressed to find a more delightful and mischievous way to spend an hour on the tabletop than with this frolic from two of the hobbyâ€™s most cunning designers.