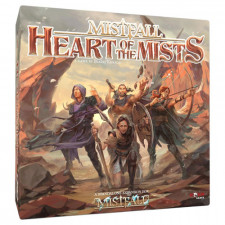 Mistfall: Heart of the Mists Review

Mistfall was a difficult game to review. As I said in my review then, "The rulebook is appalling, the proofreading shoddy, the game balance miscalibrated, and the turn structure labyrinthine." It raises the question of just what, as reviewers, our jobs are. Are we reviewing the game as it could be once errata are applied and rulebook conquered, or is presentation an essential part of a game's score? Is it okay to overlook rules that are not just confusing but contradictory or incomplete if the underlying game is just that good? And Mistfall was that good; despite the proofreading gaffes and balance issues, it was my favorite game of 2015, and at the time I called it "the fabled RPG-in-a-box."

A lot has changed since 2015. For one thing, Gloomhaven came out, an RPG-in-a-box in ways Mistfall couldn't dream of, with manifold expansivity, more and better writing, actual proofreading, and a balanced roster of hero classes. Mistfall needed to step up its game, and it has with Heart of the Mists, the standalone expansion that debuted late last year. But is it enough?

This review has a difficult jobâ€”jobs, really. It has to answer three equally valid questions: One, is Heart of the Mists worthwhile as an expansion? Two, is it worthy as a standalone purchase? And three, does Mistfall even have a place in a post-Gloomhaven world? Luckily, I'm no stranger to multiclassing.

Let me slip on my ranger hat and talk about expansions. Unlike other standalone expansions that pad out their inventory with basic cards, the contents of Heart of the Mists are wholly unique (save a few status tokens), meaning that mixing it with the original Mistfall will double your content. A word of caution for first-edition Mistfall owners, though: between the base game and the expansion, NSKN switched printers. The new cards are a slightly different size, shape and color, so if you want to shuffle together the Enemy, Encounter or Reward decks, you'll encounter some difficulty without sleeves. 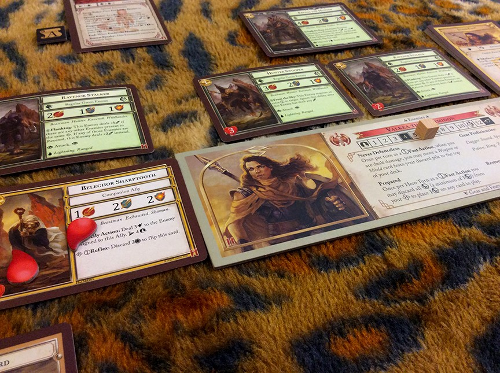 Bird-people, myrmidons and unexpected allies are just some of the new content found in the Heart of the Mists.

Beyond increasing the variety of heroes, enemies, locations (the redsand deserts of Naar), and encounters, HotM introduces several rules changes that drastically improve the flow of the game. The most obvious is the addition of allies. Each hero may now select a single ally at the start of the game. Laid out like the enemy cards, allies have attack, defense and HP values, as well as one or more special actions. Ally Actions may be used once per turn by the hero controlling the ally and are usually something straightforward like attacking an enemy, but most allies have a powerful secondary actionâ€”usually a Reflexâ€”that results in their card being flipped. Flipped allies can have altered stats and typically use their secondary action until two Resolve is spent to flip the card back over. Allies can also be used to intercept enemy attacks, much like in Mage Knight. Allies make the game significantly easier but also more interesting.

One of the problems with the original Mistfall was that each class's playstyle could feel programmed, since each hero's 32-card deck was entirely self-contained and no limitations were placed on which Advanced Feats could be purchased when. Allies address this. They mirror the existing hero classes and typically give access to a pared-down version of the matching hero's abilities, which means pairing up heroes and allies feels almost like multiclassing, drastically increasing gameplay variety.

The new reward system extends this feeling of enhanced customization. Rewards in Mistfall were limited to one-use potions and trinkets, but HotM's new, thicker reward deck is all permanent gear: swords, axes, bows, armor, and more. The list of gear proficiencies on each Hero Charter and the limitations on equip slots finally come into play, as heroes can now purchase non-class-specific equipment.

The most significant change, however, is the new Time Charter. Gone are the arbitrarily punishing Time Cards; time now passes entirely in response to player actions. This is actually a threefold change, as the Time and Reinforcements tracks have been replaced while a new Darkness track has been added. Reinforcements now increases much more quickly and pushes Time forward on several intermediary spaces, not just when filled. Meanwhile, the Darkness track determines how much time passes every round, ticking forward slightly every time an icon is passed on a hero's Enemy Focus track. All together, these changes make Enemy Focus actually meaningful. In the original Mistfall, it didn't really matter how much attention you drew if you could end the Encounter in one round, but now you must carefully consider each move you make. This brings balance to some OP characters like the rogue, who could kill practically anything with repeated dagger stabs at a significant cost to Enemy Focus. 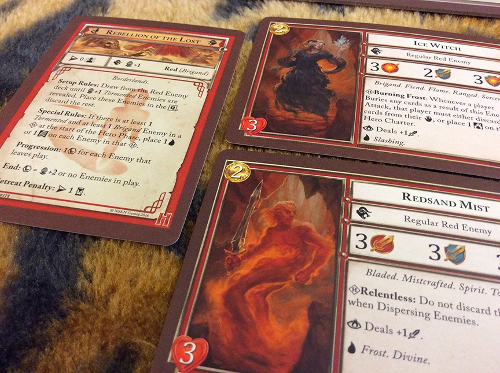 Some of the new enemy vulnerabilities allow previously overlooked heroes to shineâ€”but watch out for errata.

Okay, time to swap jobsâ€”green felt cap off, Myrmidon helm on. As a standalone game, Heart of the Mists is probably the best place to start your Mistfall adventure. Aside from the aforementioned balance improvements, the rulebook has been completely overhauled so that it's actually intelligible. Unfortunately, proofreading issues plague this release, too; at least a dozen cards need errata, some of it significant, and the publisher has been less forthright about making the fixes public. Those who hated Mistfall's recycled art and dense card layout will find little changed on those fronts. The six new heroes are a little trickier than the original roster, but they also explore some interesting play spaces like the Misthuntress who lays traps and becomes versed in enemy lore, the Weaponsmith who adds buffs and enchantments to gear, and the Namekeeper who brings two allies into battle and flips them for free.

One last switcheroo as I doff my bronze helm and don the overstuffed, peacock-feathered beret of a spoony bard. Last year, HotM might have scored five stars, but Gloomhaven raised the bar (tavern?) for RPG-alikes. Now, Mistfall's clunky prose, erroneous text and balance issues stand out a bit more. Mistfall's greatest strength is now its density, the way it condenses the entire character-leveling, loot-gathering experience into a single session. If you want a thinky take on the RPG experience without committing to dozens of plays, it's worth venturing back into the mists.