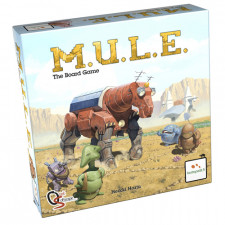 M.U.L.E.: The Board Game Review

The board game world is replete with chances to create a victory-point engine purporting to be some kind of an economic model. Some games stand out from this rabble and strive to reflect an actual economy. Heikki Harju's M.U.L.E. manages to actually create a cardboard, cardstock and wood-based method of teaching people economic principles by reminding us you can't properly illustrate supply and demand without creating a world that actually has demands.

Translating a three-decades old video game to the board isn't without its challenges, but M.U.L.E. manages to recreate the source materialâ€™s goofy, science ficiton naivetÃ© while also demonstrating what other homages to this classic design have failed to grasp. M.U.L.E's auctions were the core of its gameplay. But they werenâ€™t just any old auctions, like we see in countless board games today. Specifically, a M.U.L.E. auction is all about the dynamism between bidders frantically racing up from the bottom of the auction screen to grab enough necessities so their operation could run another turn and the entrepreneurs sitting calmly at the top of the screen who'd anticipated that panic and were ready to profit from it.

Ozark Softscape understood that fulfilling a need makes the economic world go round and profits come later, despite what protesters proclaim. This board game illustrates perfectly that the player who produces and then sits back to watch the money roll in will lose to the player who keeps his finger on the world's pulse. Itâ€™s all about exploiting demand as well as meeting it.

Colonists of the planet Irata have four possible wealth channels, each with a specific operationl purpose. Food gives players more actions in subsequent turns; energy powers the eponymous Multi-Use Labor Elements while smithore enables the Store to make more of these beasts of burden, and chrystite rounds out the field as the luxury item of the well-to-do with a price mimicking their fickleness. Like the best economic games there's no omnipotent declaration of value; players determine a commodity's relative worth but M.U.L.E. gives these items an intrinsic value beyond dollar signs and ensures no plan will survive repeated contact with the market.

Meeting demand requires either spotting that need before competitors do or fulfilling it better than they do. M.U.L.E. allows players to do both, but it also ensures that need fulfillment will constantly change due to a simple yet powerful mechanism: the Store. On the surface, it's an independent source or repository of goods in exchange for money, but unlike other games, its stock actually matters and is reflected by its prices. Players are free to buy and sell food, energy and smithore with it (chrystite is only sold, then transported offworld) and its prices are calculated based on what it thinks the colony needs, providing both a sober eye on the ball as colonists chase their dreams and a counter to unwary would-be Rockefellers who fail to spot a closing window of opportunity.

These windows lead to success in M.U.L.E., and its fully-realized world makes finding them as elusive and satisfying as hunting the Wampus (a feature also included from the Atari progenitor). Each turn players claim one of the limited plots of land on Irata, with public values for food, energy and smithore production and a secret chrystite value discovered by either spending an action to assay the plot or buying a M.U.L.E. blindly and taking a chance. The lands claimed by all players determine what the colony can or can't make and provide the first hints of impending scarcity. Rookie players hoe an Agricola-esque path of subsistence and end up with shortages and little profit, with subsequent plays offering glimpses of what should be harvested and what's better off being purchased, opening the door to junior-varsity M.U.L.E. where colonists set out to corner a particular market and live or die accordingly. Then graduation comes, with all its economic realities disguised as tokens, price tracks and shortages, propelling M.U.L.E. past Container into the rarefied board game air of great economic designs.

Players need food to take action, so gobble it up and be the only one making it. But it spoils, so you'll have to sell or lose some, and if you sell, the Store will have a supply, dropping its price and ending your monopoly after a brief windfall. Ditto with energy, which enables M.U.L.E.s to produce; hoard it and nobody will harvest anything which means they won't sell anything and have cash to buy your energy. No smithore means no M.U.L.E.s, so the Store will need your stockpile, but it means no M.U.L.E.s for you, either, until you sell, and then demand's gone. Chrystite rises and falls on the tastes of the galaxy's elite, which can bring in the coin if pirates don't show up and steal your supply first. All offer a one-time payday followed by a company-wide refit to hit the next bear market, and the colony's First Founder will be the player who makes the smoothest transition from one to the next.

This is economics. This is what it's like to strive in a world that moves whether you're ready or not, a world driven by real needs and actions instead of a preconceived scale of relative worth. This is where people, if they're paying attention, learn that you can't actually fool all the people all the time and mutual benefit is the only lasting transaction, with the proceeds going to those who recognize it first or deliver it better. Nobody wins M.U.L.E. by withholding resources or attempting collusion because long-term profits can't come from those you attempt to deceive. All players pursue the same goal and M.U.L.E. rewards the one who does it best, with begrudging nods from their fellow colonists.

I picked M.U.L.E. as my most-anticipated game of 2016 and I'm thrilled to have my excitement rewarded. After thirty-three years, a video game ahead of its time has an analog brother join it in the vanguard, and the world needs to take notice. This is a great game.