Remember that time you were playing Munchkin with your friends, and you thought to yourself, "Wouldn't it be cool if this were a collectible card game?"

Oh. Well, somebody did. It works too. It's kind of Munchkin-y, hitting all the right notes on the funny art and goofy card names. You'll get a good chuckle out of flipping through a new starter deck or opening a booster box and see what the design team came up with, whether it's weapons or concepts from regular ol' Munchkin or something entirely new. All the light-hearted loot, silly monsters, and goofy heroes are here, illustrated in a new lively style that brings Munchkin to life.

At the heart of the game is its combat system, translating Munchkin's monster fights into the tried-and-true CCG format. The battles are like Magic the Gathering'sâ€”if you attacked with a secret monster, face-down, and your opponent had to set up a defense without knowing what horrible beasty is lurking under the card. If you find yourself sweating bullets staring down a hand without any monsters at all, guess what? You can bluff, playing anything at all, and hope your opponent chickens out, causing him to take damage or waste his once-per-turn "run away" ability. 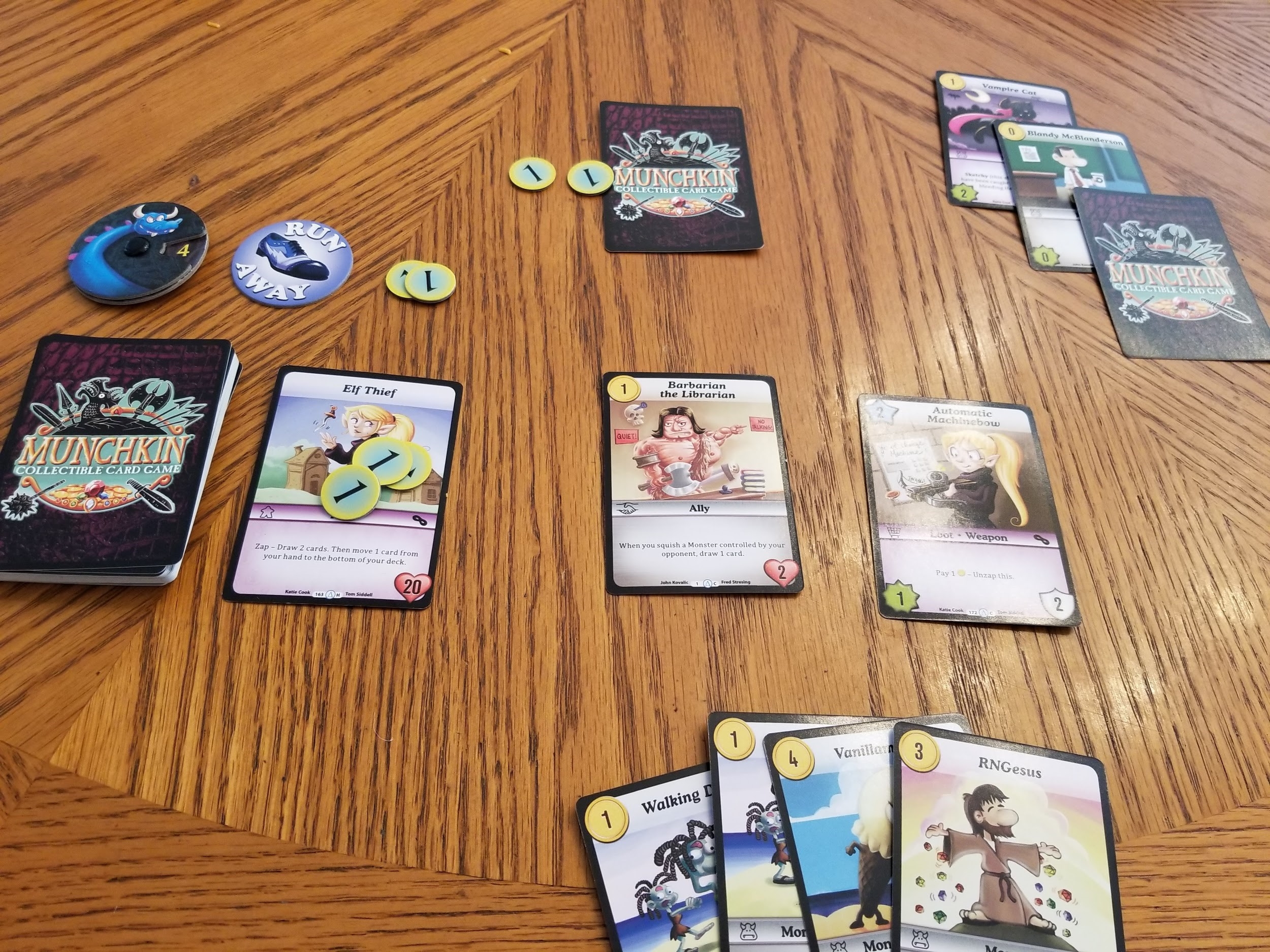 Is that a monster under there, or are you just bluffin me?

My initial reaction is that it's fine. It's solid. It does everything a CCG needs to do. The bluffing is interesting enough as a hook, even if the implications of a well-timed bluff are a little difficult to wrap your mind around the first game or two, making it a little opaque for the casual crowd. The card design is clean and clear, already vaulting the design above a crowded market of CCGs with incomprehensible iconography and a tangled mess of turns and phases. Resource generation is streamlined into an automatic once-per-turn affair, so you wonâ€™t be fiddling about with lands and mana. The â€œstashâ€ mechanic gives the game a little more design space to work with, as you set cards off to the side but get them back at the start of your next turn. I could see future sets playing with the stash to good effect.

Still, I don't find myself enthusiastic about the game, as solid as it is. The real problem is that the game's mechanics play it safe where they should have gone all-out Munchkin. We're talking about Munchkin here, a game that has goofy rules for cheating and arbitrary time limits on playing responses, along with wacky metagaming and totally broken cards. In the CCG, these elements have been tamed, caged, and distilled into a set of vanilla CCG rules.

You can't cheat in Munchkin CCG, but there's a "cheating" subsystem built into the rules. You're not bluffing and backstabbing like in the parent game, but there's a standardized set of procedures for bluffing during the game's plentiful fights. You see the problem, of course: everything that was implied in the rules of Munchkin is made explicit here, robbing the players of the joy of discovering them for themselves. When your Munchkin CCG is far tamer than, say, a Magic the Gathering joke set like Unhinged or Ungluedâ€”or even some of Magic's straight-faced cardsâ€”you've got an issue. 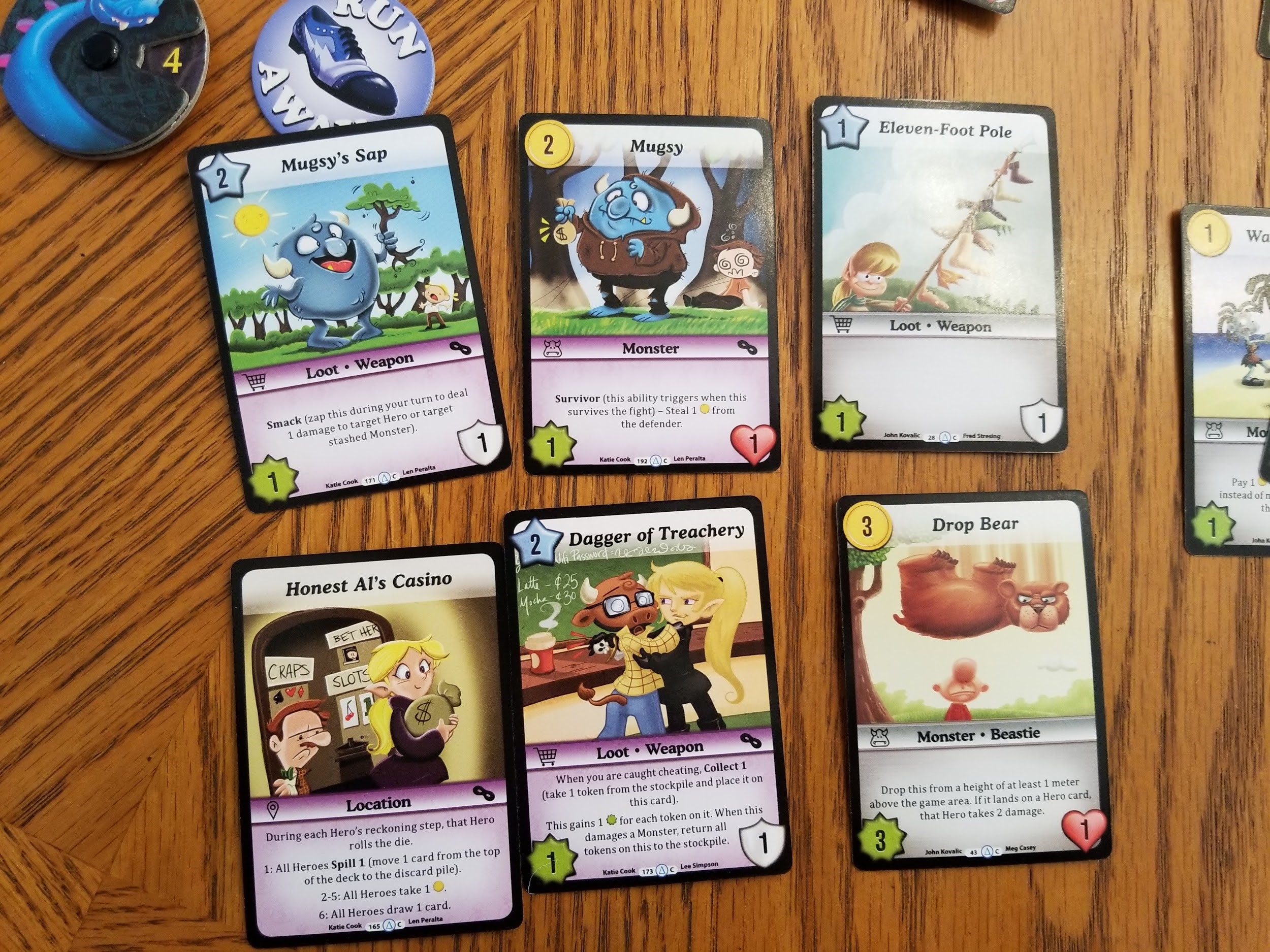 It has moments of brillianceâ€”the Drop Bear monster card has echoes of MTG's Chaos Orb and will surely get some laughs when your bear elbow-drops your opponentâ€™s hero from a few feet above the table. But again, why is the Munchkin CCG, of all things, limply rehashing something fun and fresh Magic did 25 years ago? Why didnâ€™t the designers buy into the Munchkin concept and go all-out? I want dragons with 10,000 attack points that accidentally kill themselves if you roll anything but a six. I want heroes with insanely broken abilities that canâ€™t possibly work and yet somehow do. I want it all, and I want it now!

Maybe I want too much, but Munchkin doesnâ€™t even try. It would take several expansion sets with some off-the-wall elements to get me interested again, and I fear by that time it will be too little, too late for the Munchkin CCG.