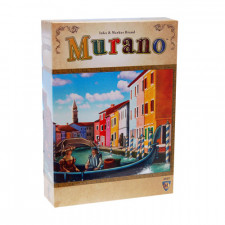 There exists a game thick with theme. A game where every mechanic integrates with a growing narrative. A game in which every action makes sense according to its story. A game where you jump to adventure every turn.

Murano is not that game!

Murano laughs at the idea of theme and is rather brazen about it. Itâ€™s a conglomeration of mechanics and rules that could apply to any setting, a typical Euro game layering its skeletal structure with an innocuous and sometimes contrived narrative that dares you to defy its reasoning. It also ticks most of the boxes on the Demands Eurogamers Make list. European city? Itâ€™s the title! Important-seeming faux historicity? Check. Merchants producing resources and profiting from them? Oh, yeah.

Sure, all of its elements are associated with the real Murano. Glass-making, canals, gondolas, palaces and shops. Yet the how, where and when you establish buildings doesnâ€™t make sense within any context except that the rules stipulate that it is so. Some actions are free because theyâ€™re available, while others cost money because theyâ€™re not. Ironically, the product for which the islands are most renowned â€“ glass â€“ is actually a small part of the game. Thereâ€™s no rhyme nor reason nor logic. Thatâ€™s okay, because Murano is good.

The design employs an interesting rondel mechanic for selecting actions. Available options ring the board while eight gondolas are spread around this. On your turn, you may pick any gondola and move it forward any number of spaces provided you donâ€™t bump into or pass another gondola. If things get crowded or your desired spot it occupied, you must pay to make room. The price increases with each successive move.

This communal roundel resolves all actions. By manipulating and navigating it you collect coins, purchase character cards for end-game scoring objectives, claim those bonuses, acquire building tiles, build those enterprises and profit from them in various ways.

Murano requires players to traverse a few steps for any meaningful accomplishment. With the exception of a couple actions, itâ€™s never about grabbing something and immediately enjoying its benefits. For example, if you want to generate income you first must buy a factory or shop. Then on a subsequent action you can actually build it and place the tile. However, you donâ€™t earn profit until selecting a third action which activates the business! At the same time, youâ€™re developing the board along with your opponents. So what they build affects what youâ€™re laying out and vice versa. Sometimes they unwittingly aid your cause, while at other moments youâ€™ll be ready to throw them off the wharf. The design successfully gives players a sense of accomplishment and reward in requiring them to string these actions together.

Muranoâ€™s rondel is extremely intuitive and well-integrated. The visual and graphic designs are informative without appearing cluttered. It appropriately commands the bulk of your attention without overshadowing the action transpiring in the middle. Youâ€™re able to figure out what each space does simply from its iconography. Thereâ€™s plenty of room, clean delineation and each one has a bow-pointed symbol denoting which direction to scull the gondolas along.

Mechanically, the rondel is also a great mechanic in managing the action selection process. Hardcore gamers might find it restraining. Thereâ€™s often little logic behind why some actions are available, while others are not â€“ except that the rules â€œsay so.â€ Still, itâ€™s generally helpful in presenting a range of choices which aids planning, keeps things organized and reduces analysis paralysis. While preventing some options to a player on a given turn, it usually provides some means to pay for an action thatâ€™s not immediately open. In some cases, every action will still be accessible as long as youâ€™re willing and able to afford it. Such is the case with Murano. It creates a wonderful tension between settling now for something free, versus springing for something better.

The track, therefore, is both limiting and malleable. At first glance, it looks really restrictive. You can do anything on the board, but it still hamstrings you in the sense that you need a sizeable income to freely move about it. Not only does it cost to manipulate the rondel, but many of the actions require coins to resolve. That makes money a hot commodity. Indeed, a comfortable savings is significant in order to enjoy a little leeway. If you donâ€™t set up shops or factories to generate income early on, you could be up the canal without an oar. So the game actually suffers from the inverse of the runaway leader syndrome â€“ more of a falling behind loser issue. What makes that whole characteristic even more interesting is that coins do not count towards victory. You need money to secure the elements that earn you points, but garner nothing from a pile of cash in and of itself. Except as a tiebreaker.

My main quibble with Murano is a pollution penalty for producing glass â€“ the trade for which the real community is celebrated. One, I dislike such jarringly arbitrary penalties in the first place. Two, itâ€™s anachronistically forced into the setting. Glass factories were indeed moved out of Venice and segregated in those nearby islands. But it was from fear of fire, not because they were filthy or fouled the air. Even though theme is not the designâ€™s strong suit, this modern sentiment seems particularly ahistorical.

Murano exemplifies most Euro stereotypes. It is well-designed and efficient with almost no randomness, little interaction and a theme that could stand in for anything. What it lacks in immersive game play it more than makes up with player-driven decisions, opportunity for smart planning and a unique rondel that gives the game a fun tension and keeps it moving at a brisk pace. Murano isnâ€™t going to blow anyone over, but most players should find weaving its latticework of actions satisfying artwork. It knows its place and lasts about as long as it should, which means this solid title is never overblown.