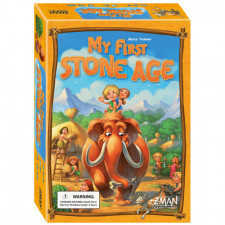 Bernd Brunnhofer's 2008 award winning Stone Age is a modern classic. Itâ€™s accessible, moves quickly and requires intelligent thought without overexerting the brain, which is great for casual gamers and those new to the hobby. It even works for the whole family. So you decide to break it out for the little ones. Everything goes swimmingly at first. You explain how to place your meeples. The kiddies love rolling dice and gathering the chunky bits. You can even teach them math! Until it all comes to a nervous hiccup with that infamous question, â€œMommy, what do they do in THIS hut?â€

My First Stone Age is perfect for those parents not ready for that conversation! 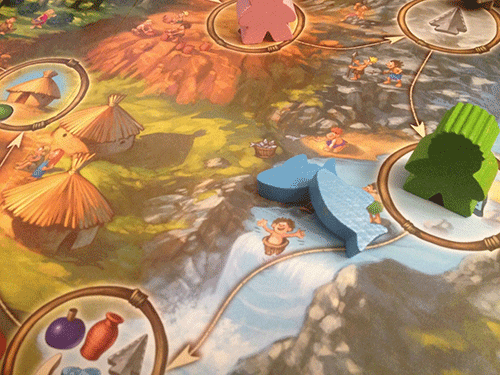 Okay, so thatâ€™s not really why youâ€™d likely pick up Marco Teubnerâ€™s child-friendly reimagining of the Spiel des Jahres nominee. Rather, this design is a kidâ€™s game that wonâ€™t bore parents out of their minds. The premise mirrors that of its adult inspiration, without as many moving parts. It also closely resembles that version in graphic design, rulebook layout and color scheme with Michael Menzel returning for illustration, albeit with a more cartoony style. Nifty 3D pop-up villages to slot your huts into comprise the main noticeable difference in production value. The kids dig them.

Players gather resources to build huts in their prehistoric villages. Itâ€™s all rather idyllic hunting and gathering with nary a fear of deadly weather, vicious beasts and 24-year old life expectancies. At least there used to be a nasty penalty for starving your people. Alas, there are no mouths to feed in My First Stone Age. You only have one cute, over-sized meeple to move about the totally unthreatening wilderness.

It all starts out very much like youâ€™d expect from a child's game. You flip a random token which tells you where to go. It's not much of a step up from roll-and-move or a spinner, but it gets better. Tokens might depict a die face with pips equaling a number of spaces to travel. Or it might have an icon matching a specific spot, in which case you automatically go there. You get what you get and you donâ€™t throw a fit. See, itâ€™s already teaching impressionable minds valuable life lessons.

Locations provide the various items needed for huts. When landing at a site you collect one of its wares. Eventually and periodically you'll arrive back at camp where you can cash those stores in to build your little mud-and-thatch abode. There are always three available, each requiring a different combination of resources. If you can meet one's demands, itâ€™s home-sweet-home. The first to erect three huts wins.

If that sounds really simple and basic, it is. Remember, kid's game. Yet My First Stone Age has a few elements which treat children with a measure of intelligence, understanding that even at a young age they can handle concepts more complex than just flipping a card and moving to the next blue square. Foremost is a memory aspect. Anytime you arrive at camp, you flip all of the used tokens back over face-down. Then swap two of them. 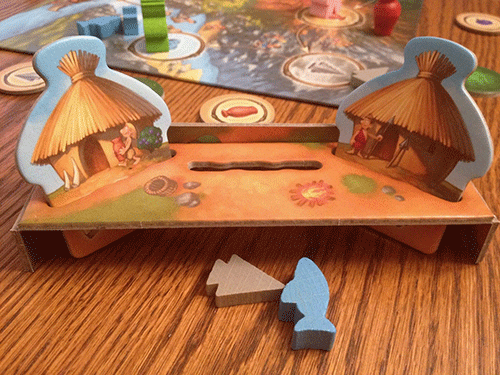 Now itâ€™s true that memory mechanisms are common to childrenâ€™s games. One, itâ€™s good for neural development. Also if urban legend and anecdotal evidence are to be believed, itâ€™s one of the few areas where kids can legit wipe the floor with their parents. At least thatâ€™s true with this old man. However, here the memory aspect serves a more interesting purpose in that it eventually counters the utterly dull method of movement with which things begin. You are not held ransom the entire game to some random card flip or die roll, as is epidemic of titles in the genre. Instead, recalling where certain tokens are or where they've moved to provide you with some control and agency over your actions. As the session progresses, collecting resources and getting back to camp are less random and more dependent on memory and choice.

Additionally two other elements loosen the bonds of chance and require actual decision-making: the trading post and dogs. At the trading post you may exchange one of your wares for any other item located there. It begins with one of each resource and so will always have a combination of five throughout the game. If you need a fish to build that next hut, but can't remember where that token was, then perhaps trading is your solution. Another space provides a pet pooch, which serves as a wild card. Perhaps the hound retrieves what you need? This gives you some flexibility, although there are only two. While other resources are also finite, this is the only thing you can actually steal from another player when landing on a spot otherwise emptied of its offerings.

Itâ€™s not rocket science. In fact itâ€™s not even caveman building a fire science. Children are likely to outgrow it around second grade. But it is up for Germany's kidâ€™s game of the year. For those of us with wee young ones, and in situations where a brood of munchkins need fun smart entertainment, My First Stone Age will make them feel a little like grownups. And the real grownups won't loathe playing it, either.