Mystery of the Abbey Review

JM: Thereâ€™s a well-intentioned evangelism within the hobby to convert the uninitiated to a life of tabletop. Designs abetting that introduction are hailed as â€œgateway gamesâ€ for their clear rules, ease of play and general familiarity. Itâ€™s possible that veteran designers Bruno Faidutti and Serge Laget purposefully created a game resembling the iconic Clue precisely with intent to ease non-gamers into the hobby. Or it could be they simply wanted a crazy, fast and sharply interactive deduction game. Knowing their body of work, the latter is just as likely. Regardless, Days of Wonderâ€™s evergreen classic Mystery of the Abbey will forever be compared to Hasbroâ€™s mass market cash cow and an ideal gateway. That association entails both pros and cons for novice and hobby gamers alike. Superficially the resemblance seems apparent. Yet after further investigation there prove to be more disparities than similarities.

DG: True, but those disparities are almost uniformly in Mysteryâ€™s favor. The design does away with the tedious roll and move where the random dice dictate whether or not you can play. It layers on additional elements like the Scriptorium and random events. And it even pushes the game to a reasonably timed conclusion by forcing players to send suspect cards around the table.

But I donâ€™t think its best niche is as a â€œgatewayâ€ game â€“ something played with the expectation of delving into heavier fare. Instead, it finds strongest purchase with families and casual gamers. Those who appreciate interesting play without needing to learn too many rules beforehand. And for that audience, itâ€™s hard to beat Mysteryâ€™s appeal. 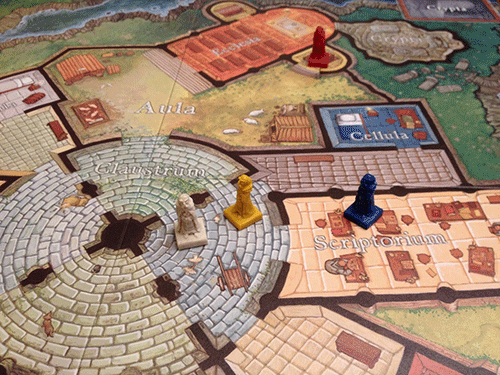 JM: I agree it best suits casual gamers and families â€“ despite its popular label as a gateway game â€“ and would curb its exposure almost solely to that demographic. Unfortunately, most of them will still play the game as if they were playing Clue, collecting cards and crossing off names as fast as they can. Itâ€™s still fun, primarily because of the different rooms and the ability to steal from other players. Yet that style fails to reach the designâ€™s ceiling. Experienced gamers willing to tap into that potential with clever inquiries and astute note-taking will grow frustrated. The random elements gradually relegate their studiousness irrelevant. Eventually most players see most of the cards and it ends with a race to the Chapter Hall and final accusation. Faidutti has built his career on wildly interactive and chaotic titles, every one of which Iâ€™ve played I enjoyed, but it misses the mark here. For a deduction game itâ€™s just too arbitrary. And if the deduction aspect is meant to be secondary, unfortunately people jumping into this immediately see that as first and foremost.

DG: I think you've missed a middle path where the game excels. The rush to collect cards and cross off names is a major aspect of the game, certainly. But even the most casual gamer understands the importance of holding back cards and delaying giving out information for as long as possible. Stealing cards, and plucking them out of order to deprive others from seeing them, are central to successful strategy.

And studious note taking is unnecessary. This isn't as deeply deductive as a game like Sleuth. But by eliminating complex grids, it makes the game more accessible and increases the â€œfunâ€ aspect. Random events mix things up. Sometimes they give more opportunities to view cards. And sometimes they do meta-stuff like asking the players to speak in song-chant. It enlivens the experience and makes plays of Mystery far more memorable.

JM: Those silly and cute events are another aspect I enjoy in Faidutti games but unfortunately disappoint in Mystery of the Abbey. While singing Morning Bells or talking in Gregorian chants is funny (once), those moments are too rare to integrate with the rest of the game. Instead we felt they were jarringly pointless interruptions for little rhyme or reason. It just seems out of place. And once youâ€™ve played a couple times, the novelty wears thin. More of these events with a greater impact on the deduction aspect would be worthwhile. Especially since Iâ€™m guessing those elements are designed to break up the gameâ€™s monotonous circumnavigating. The Chapel Hall callback for Mass every four turns is downright frustrating and means that youâ€™ll invariably spend a number of your turns simply moving two spaces to get back where you were. That defeats the advantage of nixing Clueâ€™s roll-and-move locomotion that often resulted in wasted turns. Again, generally I can enjoy the game for what it is, but the Mass mechanism is irksome. Not just as a personal opinion, but game-wise it often resets players to â€œstartâ€ for that final race to the end, potentially negating any advantage of correctly deducing the killer AND maneuvering your pawn closest to the Chapter Hall in order to capitalize before another can get there. In those scenarios it then boils down to turn order, instead.

DG: I think the fact that the singing/chanting doesnâ€™t happen every game is part of what keeps it fun when it does occur. I agree that if happened with high frequency, it would get old fast. But it seems like itâ€™s a once-every-other game situation. And itâ€™s also group dependent. My theatrical family really gets into it and makes it enjoyable. As for the mass reset, I think the purpose is really just to keep you from going to the same location repeatedly. And it actually is pretty fun to sneak into another playerâ€™s room and steal a card right before you know youâ€™re all getting called back. Itâ€™s a great way to barge in on a leading player. And, if you rely simply on the exchange of cards, I agree that turn order can become unduly important to the win. But that, I think, heightens the need for solid deduction. If you are good at asking questions and checking off suspects, your deductive reasoning (and perhaps a Crypta card) can seal the deal for you even if you wouldnâ€™t otherwise have gotten a turn.

But I do think there is one aspect which is lackluster, and thatâ€™s the scoring. You get 2 points for a correct attribute and 4 for the correct person, with ties going to the one who guessed the correct person. As such, I find that it is rarely worth it to go in and proclaim an attribute. Youâ€™d have to do that three times to secure the victory and you just give out free information otherwise. It is possible to bluff and say the wrong thing in the hope of leading people astray, but often an opponent would have that figured out anyway, knows itâ€™s a bluff, and you get minus points for nothing. Itâ€™s a sad appendage to an otherwise enjoyable family game. 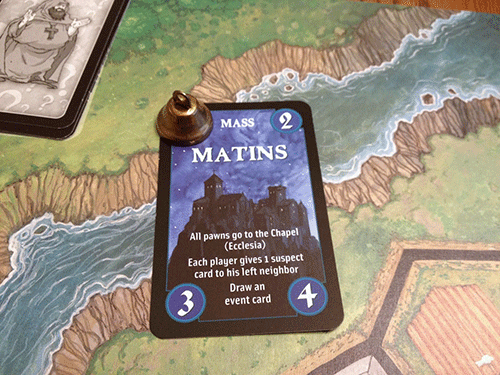 JM: Indeed weâ€™ve discovered the winner is still almost always the one that makes the correct accusation in the end. The revelations concept is inspired, but like so much in this design misses the mark. Between the weak points structure, the jarring events, card swapping and jilted movement interruptions, one might hope the deduction element would give atonement. Alas, the public questioning rarely benefits solely the inquisitor - as I think it should - unless she knows exactly what to ask and how to frame the question so that the answer means something only to her. Some gamers grok that. The majority doesnâ€™t and so inquiries are typically no more than generic and bland investigations that clue everyone else into some information.

Iâ€™m a big Faidutti fanboy and itâ€™s not that I refuse to play the game, yet Iâ€™m decidedly lukewarm to this one. Mystery of the Abbey certainly has some inspired elements, but they just fall short for even a casual deduction game. Thanks to its random rooms, bit of chaos and nasty interaction it is certainly better than Clue. But sometimes I wonder if that fact alone accounts for its popularity in a hobby which is largely anti-mass market and often prone to groupthink?

DG: I think the popularity stems largely from one thing. Most people have played Clue. They get the core concept even if the game is bland and banal. Mystery takes the best part of Clue and dresses it in something that is interesting, compact, and fun. Itâ€™s one of the few games where you can say, â€œHey, remember this game from your youth? Hereâ€™s a direct upgrade.â€ And the feeling is familiar enough that casual gamers are eager to play. And, among casual and family gamers, this title brings enjoyment, laughter, and great memories.