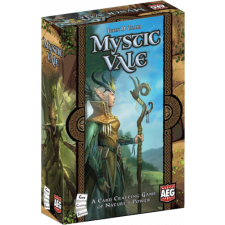 Itâ€™s not often that I get the opportunity to write about a completely new approach to gaming, so I am thoroughly pleased that I got this assignment. Mystic Vale, by Alderac Entertainment Group, has come up with something thatâ€™s not mechanically all that new but the approach theyâ€™ve taken is completely and totally new. Itâ€™s a deck building game that allows you to take up to three cards and physically combine them into one new super card. This is accomplished by using transparent cards and sleeves which you can slide three cards into in order to create one new card. Thus, if you have three cards in your hand that are compatible, you can combine them into one new card, shrinking your total pool of cards by two. When the new card enters your hand, itâ€™s as if you drew three great cards at once. Some might call it a gimmick, but if it is, itâ€™s a brilliant one that plays incredibly well. 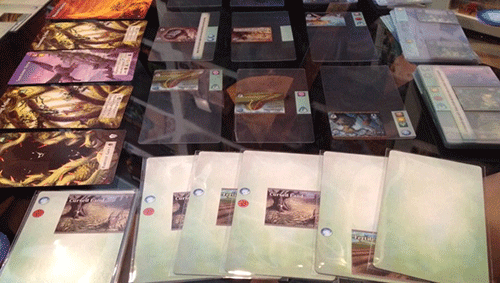 Considering that I am not a huge card game fan and I identify as a â€œdeck builder denierâ€, this game took me by surprise. Really, this isnâ€™t even a deck building game as much as a â€œtableau building game.â€ Itâ€™s similar to Race for the Galaxy in that the goal is to play cards which allow you to buy cards for your tableau, earning victory points before a pool of VPs runs out. But on top of more common elements, this whole concept of combining cards into super cards is absolutely brilliant in scope and I hope to God above that this concept is licensed out to all future games. Imagine playing Mage Knight where the hand limit is curtailed by the ability to combine cards? This has limitless applications, and the designer should be applauded for coming up with it and executing it so amazingly well.

Players take on the role of druidic shaman-wizards trying to restore balance to nature. Hardly high concept stuff, and overall the setting is wafer-thin. The theme of â€œcard craftingâ€ drives the game through an incredibly tense press-your-luck race to buy cards faster than the next guy. Each card has one or several icons on it which provides you one of several currencies that you use to purchase either hand cards to bolster your deck or tableau cards which provide you benefits every turn. Where this differs from Race for the Galaxy, from the card perspective, is that you can continue to draw cards into your hand until you lose your nerve or have four red icons showing, at which point youâ€™ve â€˜crapped outâ€™ and lose your turn.

Some cards mitigate the red icons, and the asymmetrical deck design is such that you can combine one of the cards which negates all red icons on the card with other cards which have several red icons but lots of currency icons. This card combination means that you can use them to their full benefit without running afoul of the four-red-and-youâ€™re-dead rule. Iâ€™ve played this game seven times now and Iâ€™m still imagining the moment when I can create the perfect trifecta, which is very exciting a prospect. Itâ€™s been a long time since Iâ€™ve been this intrigued by a card game, and Iâ€™m amazed how much thought was put into the card distribution. 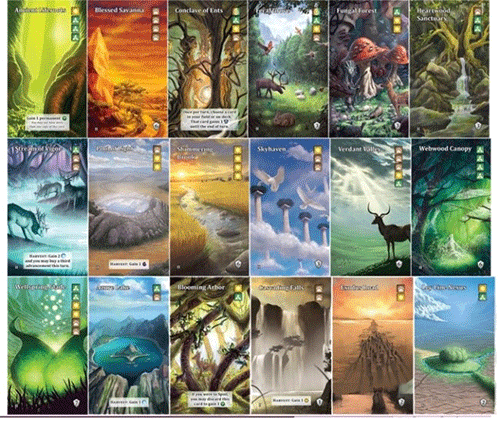 I have a few minor gripes about the game, but all of them have to do with the fact that pulling cards out of the sleeves between games is a bit of a pain, and the initial â€œunboxing and assemblyâ€ can be a chore because each of the 80+ basic, translucent plastic cards have clear, plastic liners which should be removed from them so that the text is more legible. Iâ€™m not sure how the cards will hold up over time, being printed plastic and not really able to be individually sleeved, but Iâ€™m more than happy to endure a couple of scratched or nicked cards because the game is so wicked cool and totally enrapturing.

This is a game that will have an influence on many more games to come, and I wholeheartedly recommend it to anyone who likes games such as Race for the Galaxy or Splendor. This game has already been eye-opening for me, because itâ€™s a design that completely changes how deck building games should be viewed in the future. Even beyond that, I can imagine table-devouring adventure games like Runebound or Talisman benefiting from this kind of technology, allowing players to have the same amount of cards while saving a huge amount of table space. All in all this is a hands-down winner and this is coming from a guy who doesnâ€™t like deck builders or even most card games.