Naruto Shippuden: The Board Game Review

Weâ€™ll get the disclaimer out of the way first, because one always seems necessary when reviewing a television, movie, or other entertainment license: Iâ€™m a fan of the Naruto cartoon. While I havenâ€™t seen every episode and canâ€™t name every minor character, I enjoy it in the same way any grown man enjoys a kidsâ€™ action cartoon. Going into the Naruto Shippuden board game, this allowed me to have an idea of what the theme was all about without high hopes or expectations that could easily be crushed by bad implementation.

In the box is a pretty straight forward modern cooperative game, where player have an allotment of actions each turn to move around and clear threats from the board. In this instance threats are â€œtrapsâ€â€”randomly-placed tokens that depict minor enemies or explosive scrolls intended to slow down players and keep them from reaching and defeating the gameâ€™s villains. Over the course of nine rounds that last three turns each, a miniature representing various attacking bad guys leaps around the map of Narutoâ€™s canonical world. The good guys must plan their actions to intercept the villains at the same time as they prepare for future attacks; the path of the villainsâ€™ appearances is always the same nine spaces, in the same order, across the board.

Ultimately this makes Naruto Shippuden: The Board game an exercise in action management and strategic planning. Depending on number of players and the difficulty setting of the game, a similar movement path for each hero can be followed to be victorious in each play. The only variables here come in the form of dice rolls and revealed villains. When enemies are encountered the custom dice are rolled, â€œhitsâ€ are counted on their faces, and the threat is either defeated or remains on the board to further hinder progress. Villains, a different flavor of which is revealed each round, can change gameplay by altering the state of the board and resetting the heroesâ€™ hard work; the latter proving to be incredibly frustrating when the dice have already been merciless in barring playersâ€™ progress. 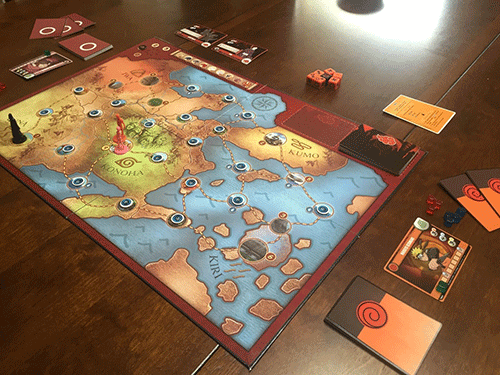 Assisting players in their endeavors and mitigating some randomness of the dice rolls, fortunately, is a brilliant mechanic in each heroâ€™s deck of Technique Cards and Chakra resource. Chakra cubes are a currency that determines a characterâ€™s ability at a given time to play a variety of special power cards. These can enhance combat ability, heal wounded characters, or even grant extra actions on a turn. The Chakra cost of many cards is very low, often a single cube, and Chakra is regained at a rate of one per roundâ€”or even more if players choose the Meditate action. This allows cards to be used on almost every turn and cycled through quickly, injecting some much-needed variety into player actions and being necessary to cause enough damage to each roundâ€™s villain to defeat them.

To what end are the heroic ninjas chasing random villains round after round for eight long rounds, though? Quite simply the more villains that are intercepted and defeated by the good guys, the easier their battle will be in the ninth round when they must return to the village at the center of the board and battle two â€œbossâ€ villains. With lucky dice rolls the heroes could theoretically fail often and terribly throughout the initial eight rounds, as long as they have excellent Technique Cards and the Chakra to overcome some really high defense numbers. While this is a long shot, it is a possibility for victory.

Overall Naruto Shippuden: The Board Game strives to be a strategic cooperative game that rewards planning and teamwork, but random chance in the form of dice rolls and card draws can send the best laid plans careening off the rails. This would add an exciting element to the game if each round werenâ€™t so ruthlessly short and time werenâ€™t a commodityâ€”a single wasted action will, more often than not, allow a villain to escape undefeated and increase the difficulty of the gameâ€™s final bosses.

For fans of the franchise that are relatively new to tabletop games Naruto Shippuden will have much more appeal than it will to long-time gamers. The mechanics have the distinctly random overtones one would find in a mass marketed game license, offering more value in the form of repeat plays and lucky breaks than they do in rewarding strategic play. The theme seems to shine through the Pandemic-like veneer to give the game its own unique identity and offer the right amount of homage to the license, too. With ninja star-laden dice rolls simulating martial arts battles, colorful Technique Cards depicting iconic â€œjutsuâ€ form the cartoon series, and plastic figurines of your favorite Naruto characters gallivanting across a familiar and visually appealing map, the game certainly does its source material justice in appearance if not in exciting gameplay.