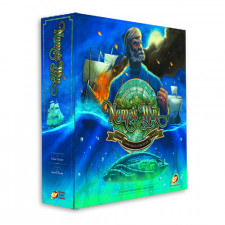 BC: Nemo's War was one of the great titles of Victory Point Games' early catalog. Based on Jules Verne's scientifically prescient novel 20,000 Leagues Under the Sea and designed by Chris Taylor of Fallout fame, the original Nemo's War was as many-sided as the enigmatic submariner himself. It was part wargame, simulating naval combat in the 1870s. It was part adventure game, with a big deck of adventure cards calling to mind events from the books. And it was an exclusively solitaire game with a robust array of options for earning victory points--options that change, intriguingly, based on which motivation you chose for Captain Nemo at the start of the game. Now, eight years later, Nemo's War has resurfaced in a cutting-edge new edition that features enhanced components (no more paper maps), rebalanced mechanics, new content, and an expanded player count now serving up to 4 players in both cooperative and semi-competitive modes.

This deluxe revision has been a long time coming, and I've held off purchasing the game until the new version was released, so this is my first experience with Nemo's War. I think you've played the original, though. How did you find it?

MB: Well, now that you have made me feel old and practically on my deathbed by reminding me that it's been 8 years since I first played this rather underappreciated gem...I've always loved this game and I'm very happy to see it back on the market in this new edition. I recall reading the description of it and that it was a 20,000 Leagues Under the Sea game and I had to have it. I ordered it direct from VPG, and this was back when everything was polybagged and really rather crudely produced. But it didn't matter, because the game was so good. There's really nothing else quite like it - it has the rigorous narrative and sense of exploration you'd expect from an adventure game, but it definitely has some of that wargame DNA in it as you've noted. It's really rather close to one of those solo submarine campaign games, something like Silent Victory, but rather than detailing patrols and raids and so forth, it was really about Captain Nemo, his adventures, and his objectives. And it still is.

The new edition is definitely the best-produced game that VPG has issued to date, bringing their quality level up to GMT standards. But I would warn folks to beware, that it may actually be more grognard-y than it appears to be. 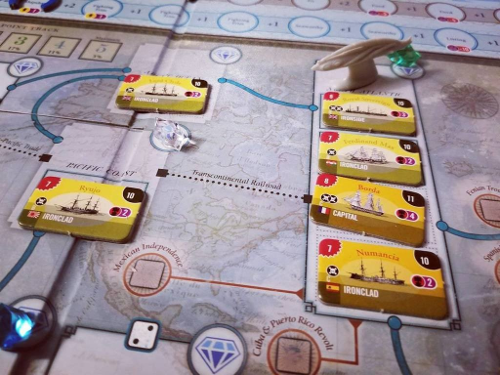 The Nautilus on the prowl.

BC: Well, a grognard I most certainly am not, but I've loved Nemo's War. I have to commend Victory Point Games for making games like this and Dawn of the Zeds that really straddle the line between wargames and adventure titles. And even though Nemo's War isn't a States of Siege game like Zeds, it's got a similar backbone. There's a chapter in the book (and a card in the game) that reflects Nemo's engineering philosophy: Everything through electricity. Well, for this game, it's Everything through dice. You roll dice to resolve every action, be it searching for sunken treasure, inciting rebellions, or giving your crew some R&R. And just as in Zeds or one of those solo submarine games, you'll compare your result to a table of outcomes to determine the outcome of your action, which can range from better-than-expected to a total backfire.

MB: It really does recall classic solitaire war game designs like B-17: Queen of the Skies where you would have a ton of charts and a ton of dice. Likewise, those games had a very narrative-driven sense of play. But all those dice and resolutions are what make games like this come alive. The swings of fortune, unexpected turns of events, sudden denial of resources or whatever all create a matrix of emerging situations. So it makes sense that we are arriving at assessing this game as a war game/adventure game hybrid. And that's gonna mean some dice rolling!

BC: Normally, I hate games that use dice this heavily, but Nemo's War makes it work. Part of it is the simplicity: every roll outside of combat and ship placement uses two dice with the same parameters for success. But a big part of what make's Nemo's diceiness work for a dice-hater like me is its ingenious mechanism of "exerting" one of your ship's resources, like crew, hull, or Captain Nemo himself, for a significant positive DRM or die-roll modifier. The Exerted resource is essentially gambled on the outcome of the roll. With this DRM, failed rolls are the exception, not the rule--but they're doubly catastrophic, hitting you once for the failed roll itself and again for the Exerted resource. It adds a layer of tactical consideration and makes the game feel like more than a series of random outcomes.

MB: I love this mechanic and I also love the one-shot character assists and the treasure expenditures. These all ask you what you are willing to put on the line for a slightly better chance of success, a reroll or other advantage. It adds drama and along with the way the whole thing is scored it makes for some tough choices throughout the adventure. I think the other million dollar mechanic in here is the four different scoring schemes keyed to Nemo's objectives. This also generates some lovely tension- you might be trying to explore or do science, but you may be forced into fighting at inopportune times. 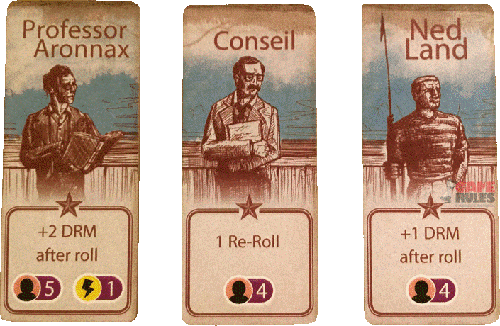 At no point does Ned Land play a banjo made with a turtle shell accompanied by a seal. Sadly.

BC: What I love most about the Motive system is that it lets you choose which type of game you want to play. The oceans you're plowing are a bit of a sandbox. Searching for treasure, fomenting discord, sinking ships, upgrading the Nautilus, or seeking adventure can all earn you points, but those scores are modified up or down depending on Nemo's motive, which you choose. The motive also affects setup so that a game set up for Science or Explore will be a little more peaceful than one using the War or Anti-Imperialism motives. And if the adventure deck or ship placement throws you a curveball, you're given a choice to change your motive late in the game. It's not like Nemo is four games in one, but it's at least two, with the two combat-heavy objectives feeling markedly different from the two peaceful ones.

MB: It's not so much different ways to play; the motives are much more of a tone-setting device. They also sort of lay out a long term strategic approach that gives everything you do a unified framework while adjusting valuation. But most importantly, I think they cement Nemo as both a character and as a player's in-game presence. This is Nemo's adventure, regardless of what his goal is...or the outcome as described in that fun little book it comes with.

BC: There's a feedback loop to playing aggressively. Clearing out an entire ocean with bold attacks because you can get +2 points for every warship on the tonnage track will push your notoriety through the roof, which in turn leads to more warships (the reinforcement groups) being shuffled into the bag and maybe even an additional die in the placement phase. I think they've managed the different Motives well to cater to different experiences: some in which you fight to live, others in which you live to fight.

MB: Right. I think the fighting element is really, really significant regardless of the motive and in fact it is sort of the underpinning of the entire game. This is why it has that distinct wargame feel. It's very much about naval battles, and those battles can be the primary focus if you have one of the more militant motives or they can serve as a backdrop if you are pursuing a more scientific or exploratory course through the game. But ultimately, it is a narrative adventure - very specific, and really quite detailed.

BC: We've mentioned adventures a few times, but I don't think we've quite explained them yet. The wargamey part of Nemo's War occurs in the board of connected sea spaces, where ships will appear in search of the Nautilus and must be shot down before they overwhelm the board. This could be any naval combat game. But between turns, the adventure deck brings the full flavor of Verne's novel to bear. Virtually every detail from the story is reproduced on these cards, alongside choice quotes from the novel and some woodcut-style illustrations. These moments are nicely realized and give the game an "anything can happen" vibe. 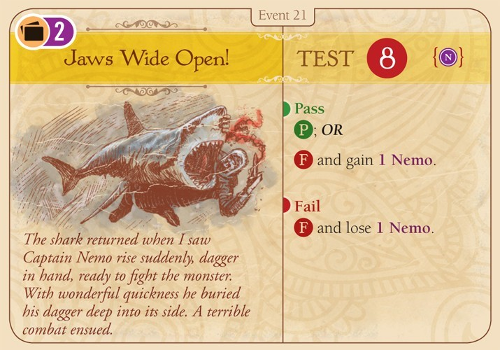 Yeah, it's this awesome. All the way through.

MB: And they are also so thoroughly soaked in a love for the novel. Even going back to the 1st edition, it was clear that Mr. Taylor really want to make this the ultimate 20,000 Leagues game. There's more fidelity to the tone, atmosphere, and themes of the source material then there is in Arkham Horror. Ultimately, what we're talking about is like what you say, an "anything can happen", flip-a-card adventure games seated in the middle of a war game. And I think that is tremendously interesting and fun, especially as a solitaire game. The new edition adds some co-op nonsense, but for my part, the less said about those concessions the better.

BC: Agreed. The cooperative game basically just divvies up the upkeep responsibilities and asks players to take turns in the hotseat. The competitive game isn't even worth mentioning. But solitaire, it's worth hanging in for all twenty thousand leagues.

MB: It sounds like we are in agreement on Nemo's War- one of the best games Victory Point has released to date in an excellent new edition - just be aware that it is primarily a solitaire game, and one of the best ones available at that.