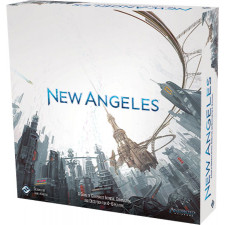 CT: New Angeles is the center of Fantasy Flight Gamesâ€™ Android: Netrunner universe. Itâ€™s a sprawling megacity with an elevator that connects to the moon. It boasts neon lights that burn your eyes and swelling crowds full of dirt and scum that rubs off on you just a little as you get lost in the darkness.

In New Angeles, youâ€™re not stumbling through the gutter looking for your next meal. No, here youâ€™re sitting in a smoke filled room engaged in a social battle to end all battles. The ants trying to get by are your pawns and corporate profits are god. Power, corruption, and the fate of a society are tools. Not to achieve excellence, rather, to best your rival and thumb your nose at their failure. Itâ€™s petty, but more importantly itâ€™s brilliant.

Stylin', whilen, livin' it up in the city

RC: The conflict between MegaCorps and the populace has always been front and center in the other Android properties. New Angeles moves that conflict to the background and focuses on the Corporationâ€™s conflicts with each other. Ants are a great way to describe the population of New Angeles relative to the CEOs of Weyland or NBN; weâ€™re fighting at a level so high that we donâ€™t even use money. Our currency is capital - both social and financial - and people. As CEOs theyâ€™re nothing but assets to us, but it isnâ€™t lost on me that as we wheel and deal and pass them back and forth weâ€™re literally trading people.

CT: I think that really ties into New Angeles being a very heavy game. Not in terms of rules or complexity, but in terms of emotion. It can leave you exhausted due to all of the discussion and negotiation. The entire design is about negotiation. You have to converse with the board via action cards to accomplish much of anything. You have to engage in a back and forth with other players to gain support. Itâ€™s really dynamic and downtime is minimal.>/font>

RC: Itâ€™s minimal and itâ€™s often invisible. It might be someone elseâ€™s turn but you have the chance to counteroffer, support, and of course there is the never ending table talk. This game is about so much more than the pieces on the table. Theyâ€™re really there to frame the discussion and provide the background - a background they often fade into because the real action is happening between the players. Trust is built and lost faster than personnel liquidations after a hostile takeover.

CT: When you combine that subtle interaction with the rival system and the possibility of a Federalist traitor wanting to tank the game for the rest of the group, all of this provides a pretty tense atmosphere, albeit one that is pretty fragile. When the game is firing on all cylinders and itâ€™s on, itâ€™s definitely on. Yet, it can all run kind of flat, like a car thatâ€™s thrown a tire or an engine that canâ€™t stop knocking.

RC: Thatâ€™s my biggest hang-up. If Iâ€™m being honest, Iâ€™ve had a couple games that feel more like middle management metric chasing than tense power struggles between industry titans. The rival system works really well to constantly pit you against someone, but - especially with 4 players - itâ€™s possible for the web of deceit to look more like a straight line. If someone is the federalist in that situation, it can devolve into a situation where 3 people are playing a purely cooperative game and the 4th is struggling to cause chaos in limited ways.

CT: Yeah, and I think thatâ€™s a fair assessment and one of the possible weaknesses of the design. I think it is exaggerated at lower player counts, but much of the design relies on that tangled web of selfish plays. Most social games rely on players acting within a particular framework, and deviating from such a position can make the entire thing fall apart.

With that being said, when this game works it definitely delivers. My plays have been full of energy, backstabbing power-plays, and much shenanigans. Finding that balance of achieving the greater good while keeping your victory condition in mind is a satisfying style of play thatâ€™s rich with depth.

RC: I absolutely agree with you. You could easily describe this game by talking about the bits and pieces that remind you of other excellent games, and yet it is wholly its own. Iâ€™ve never played a game that depends so heavily on the players to bring the right mindset. With that said, itâ€™s brilliant when it works. The real power of New Angeles is in allowing you to inhabit its world. As you look down on the people of the city - the board is a birdâ€™s eye view - youâ€™re literally positioned above their concerns. Yet, you canâ€™t ignore them. The seething masses will never hurt the CEO youâ€™re playing as but you have to care about their riots and disease or youâ€™ll lose your grip on the power you desperately crave.

CT: Itâ€™s interesting that the demands set forth by the people, and the constant struggles of the environment, are really a nuisance. They get in the way and emplace obstacles that you have to hurdle in order to gain your capital. They also detract from that central goal of beating your rival and to some degree create busy work.

RC: Thatâ€™s a great way to describe it. Itâ€™s pretty easy in most rounds to set up the production you need, and even easier to start focusing on your own capital gains while ignoring the fires that are starting to blaze in the city.

CT: That murky area where youâ€™re trying to put out fires with the least amount of effort while twisting that knife with maximum force is really where the spirit of New Angeles lies and what sets it apart from similar designs it hearkens to. The only game that really approaches this level of selfish play bolted onto reluctant altruism is Homeland, another semi-cooperative design from Gale Force Nine. Homeland, however, doesnâ€™t pit you directly against another player and itâ€™s the area where New Angeles really shines as a unique entity.

RC: Many games have brought broad negotiation and social politicking to the table, but New Angeles gives all of that a very direct focus. Youâ€™ve got one single person you need to beat, one single rival that you need to best, and everything around is just noise. Youâ€™ve got to bring the right energy to the fight; New Angeles provides the weapons.

CT: I think the takeaway here is that in a year packed full of great releases, New Angeles is pretty unique and stands out. It provides an altogether different experience than pretty much every other hot title. Itâ€™s a design that Iâ€™ve thought about a great deal after each play. It's the type of game that paces back and forth in your noggin, inviting insomnia.