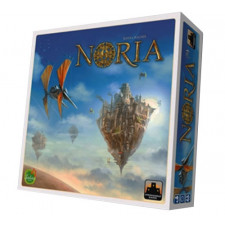 In some long lost forgotten tongue, Noria is synonymous with beautiful. This game is undeniably pretty, pretty in a way that most cardboard producers would kill for. You have these sleek air-skiffs delivering precious resources to floating islands of vertically stretched metropolis. Beyond the facade you have plastic hubs forming the backbone of cardboard wheels that you merrily spin each turn. It's all quite lovely and supports a very solid piece of design.

Noria is primarily an economic Euro. It can appear complicated and obtuse upon your first encounter. Those standing with two feet on the ground and peering upon the floating isles from a distance may even confuse the proceedings with a Stefan Feld production. One sidelong glance and you see rotating wheels, arbitrary action restriction, and a point-salad aroma wafting down from the cliffs. But alas, this is no duck. 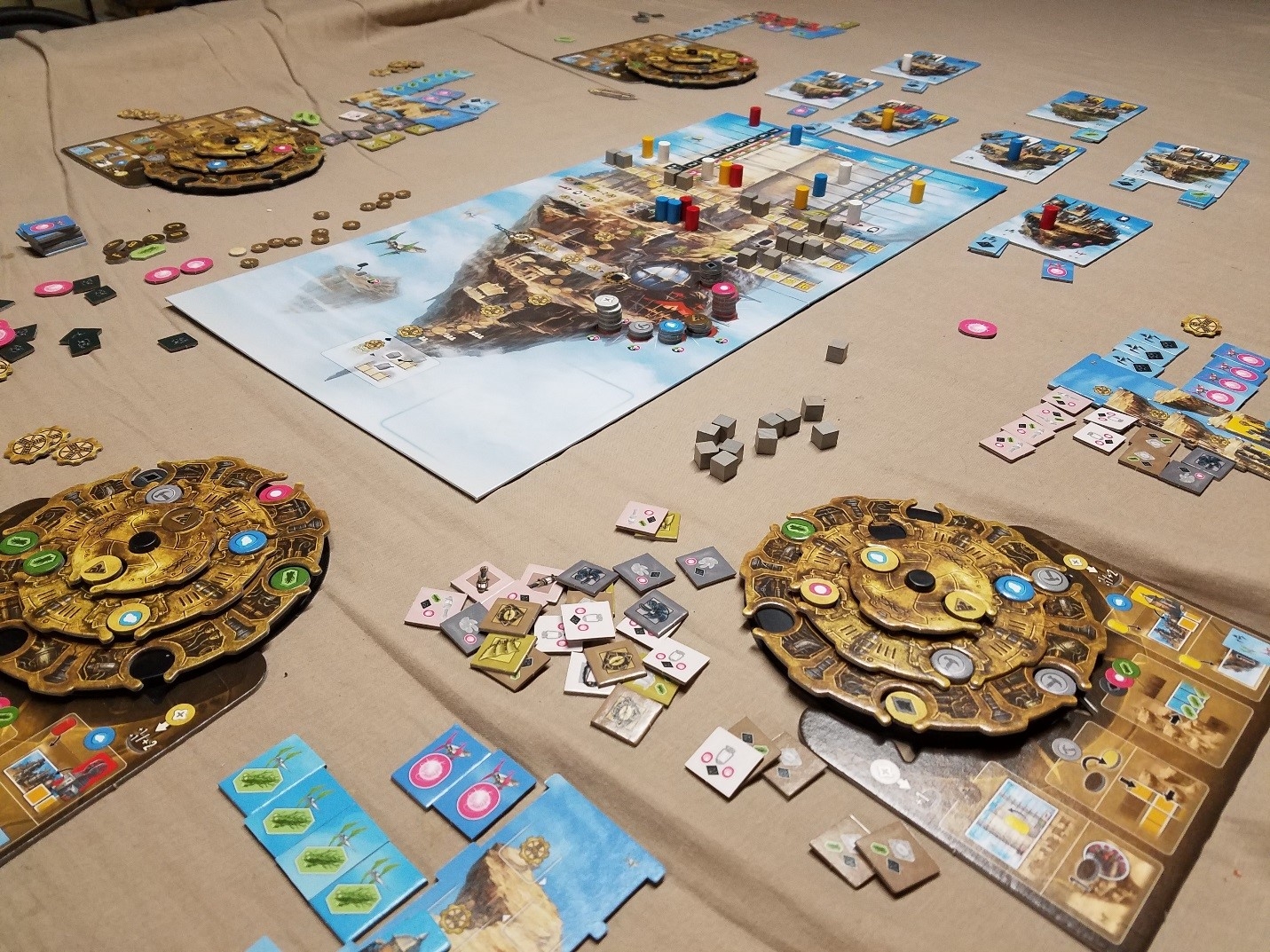 While this is a game focused on earning victory points, it's not one that doles them out haphazardly. 'Scoop them up' is an inaccurate descriptor as you invest in different paths of potential and must wrest each last drop from your fellow players.

This investment system is the most interesting element of the design and one worth exploring. Players must expend effort on multiple vectors, pushing yourself down each of the four paths by spending resources. You must balance this with putting time into propping up the paths youâ€™ve pushed hardest down so that they are worth a higher multiplier at end game scoring. Simultaneously, when increasing the value of one path you must decrease the upper limit of another. This, combined with the fact that multiple players may be investing in the same path, results in this enticing angle where moments of cooperation arise amid some very aggressive maneuvering. Piling on to cut certain options down and limit maximum potential is a regular occurrence with a group so inclined. It's delicious and at times very cut-throat in the most delightful of ways. 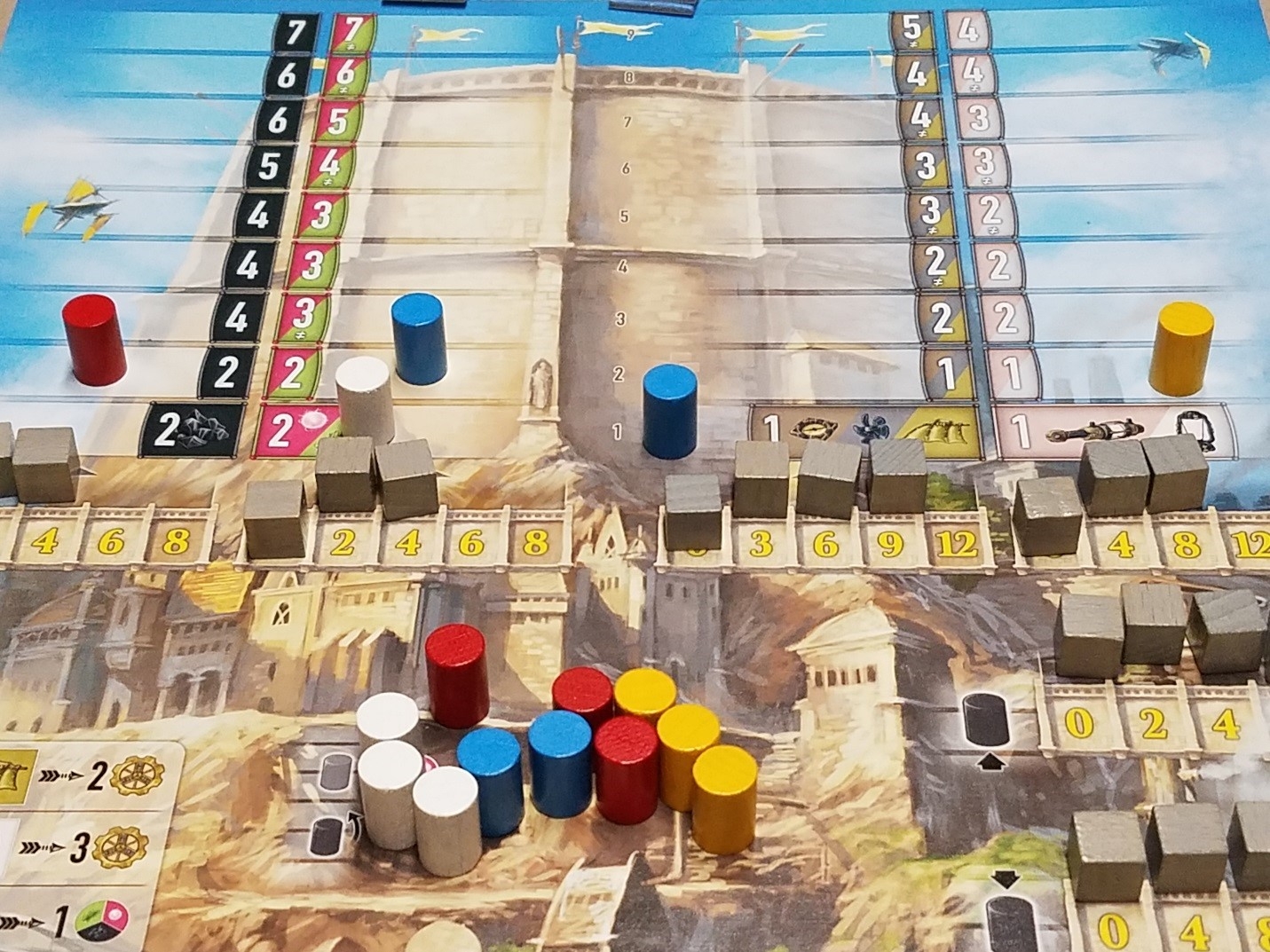 While this stock-like victory point mechanism can be quite devious, it's also the only point in the game where players meaningfully interact with each other. The bulk of play is in building up your customized action wheel and building efficient turns. This is relatively flexible and more forgiving than the player directed scoring system.

The action wheel is roughly comparable to a deck-building mechanic. Players expend actions to place new tokens in open spaces in their wheel. Each turn the wheel rotates and you can perform an available action on each step facing you of the three tiered contraption. The positioning is important so that you can maximize the benefits each round, but you're able to adjust on the fly by spending Knowledge for extra rotations or even swapping the position of two tokens. 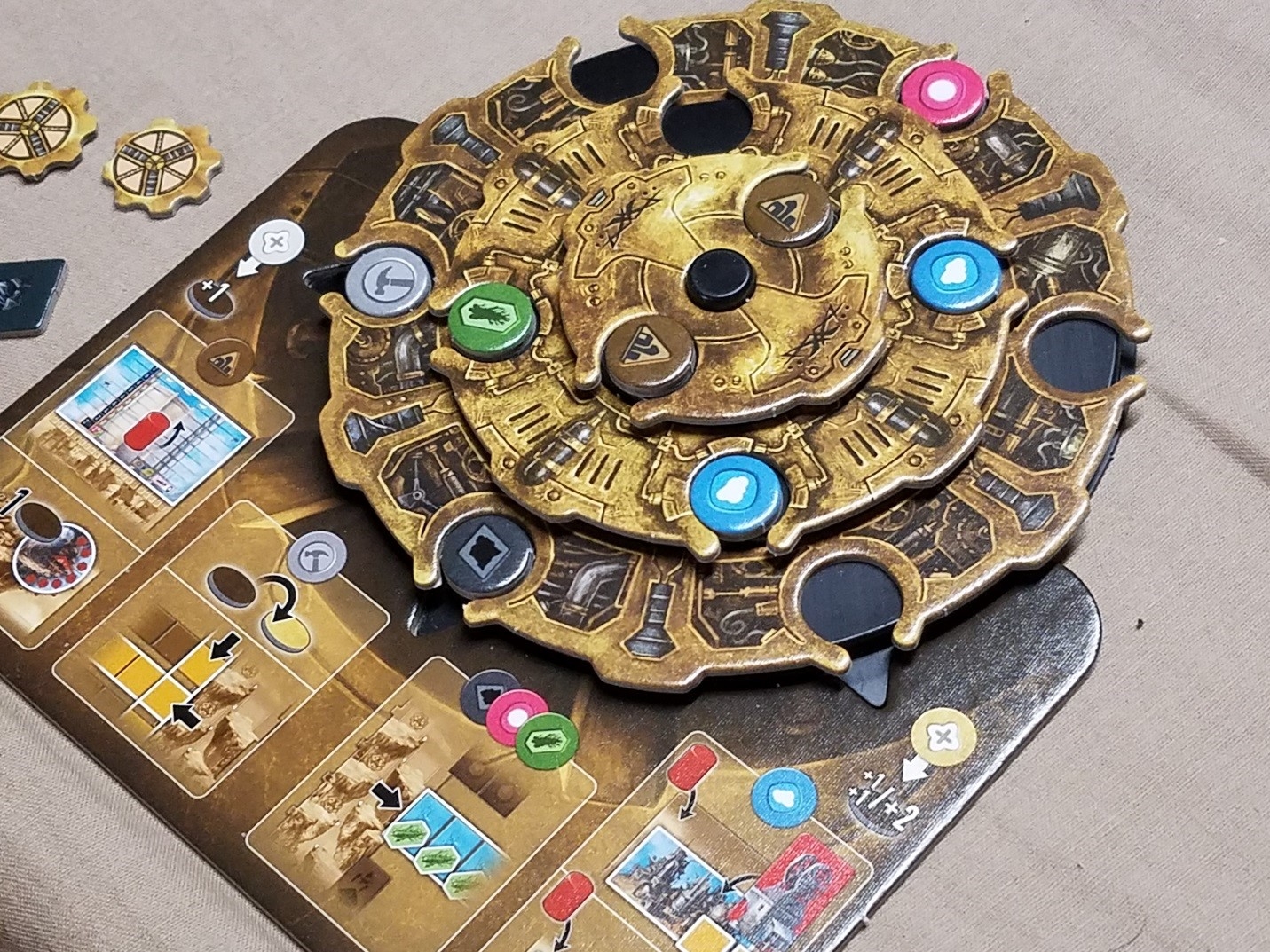 Since everything is visible this gives the feel of a deck-builder where your deck is entirely transparent. It's fascinating in this regard and works rather well. The only deficiency is that each action is pretty discreet and isolated, so the combos you are able to pull off aren't quite as nasty and lack some of the oomph of the traditional model. Still, this is quite satisfying as a somewhat innovative process.

As you stick tokens into your wheel like baseball cards jammed between the spokes of a beloved bicycle, you'll execute actions such as harvesting resources, filling warehouses with rare goods, and upgrading tokens to enhance their performance. There are a number of paths you can be pulled towards and many vectors to explore here.

One possible concern is that the game doesn't vary a great deal between plays. The advanced rules address this somewhat by randomizing the cost of action tokens and the positioning of resource-bearing islands, but it can't quite buck the quibble that play is somewhat repetitive on the whole.

While this could be a death knell for some designs that are not heavily focused on player interaction, it's somewhat minimized here due to the multiple paths of economic development and those changing action valuations. The issue would only reach critical mass for a group that wanted to play this repeatedly over a long period of time. Since you're hitting up BGG to read this article, I imagine that won't be a problem as you likely have 35 other shrink-wrapped titles starving for your attention. Space this one out in your rotation appropriately, and all will be well. 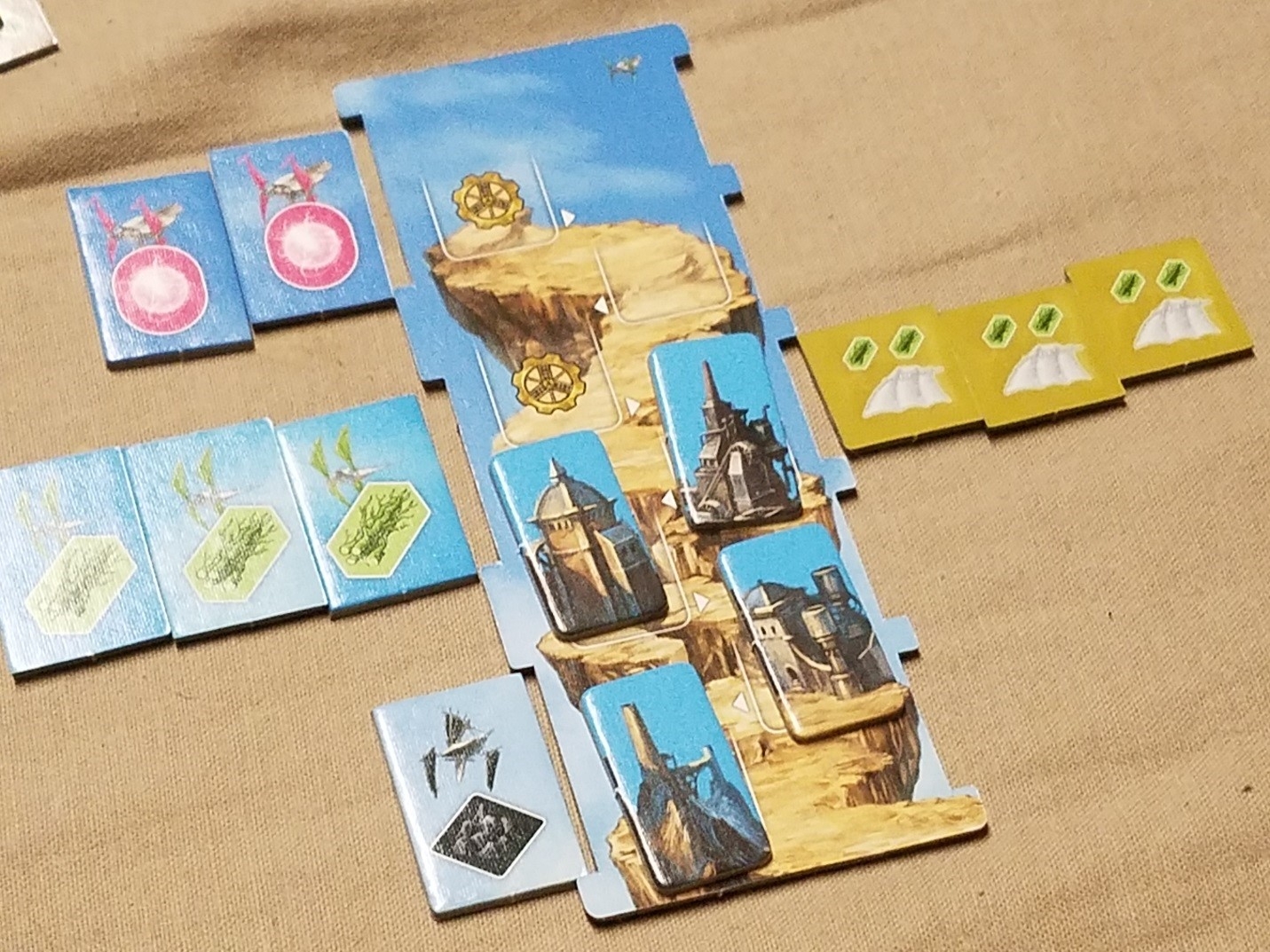 Yet, over time, repeated play does bear fruit. This is a design that is not overly complex, but is one that can be awkward to teach due to its compilation of unique concepts. Once it clicks with a collective it will fly along at great speed as turns are executed in mere seconds. Since it's not an overly chaotic game - scoring aside - you can easily plan your turn in advance and slam on the gas when it gets back around to you. This is a huge boon in this space as momentum tumbles forward and you want to get to those higher grossing turns where you can pump out flying boatloads of obsidian.

Noria is a mid-weight Euro from a debut designer that actually possesses a modicum of innovation. It has a very satisfying and engaging scoring system coupled with a unique wheel-building mechanism that gets the cognitive juices flowing. The setting is mostly just fluff and an excuse to make a pretty product, but damn is it pretty. These qualities are bare and the game doesn't hold back, so all that's left is to decide whether you want to hop aboard the skiff and hit the heights of Noria.