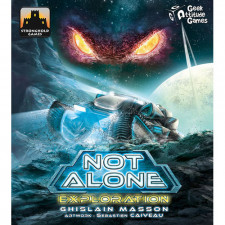 In the ever-changing board game landscape, few games make it to mainstay status. New and exciting games are always on the horizon, making it easy to push aside even those once-played games. Not Alone, however, has ignored my groupâ€™s fickle tendencies and positioned itself as one of the games we keep on regular rotation. Itâ€™s an enticing asymmetric dance as one player tries to capture the other players before they are rescued from an overly enthusiastic planet that wants to catch â€™em all. Though the specifics of each session play out differently, the base game always used the same set of ten place cards. Wandering around the same planet could sometimes feel like digging through a boring old toy box. Not Alone: Exploration is here to rectify that with a whole new bag of goodies. 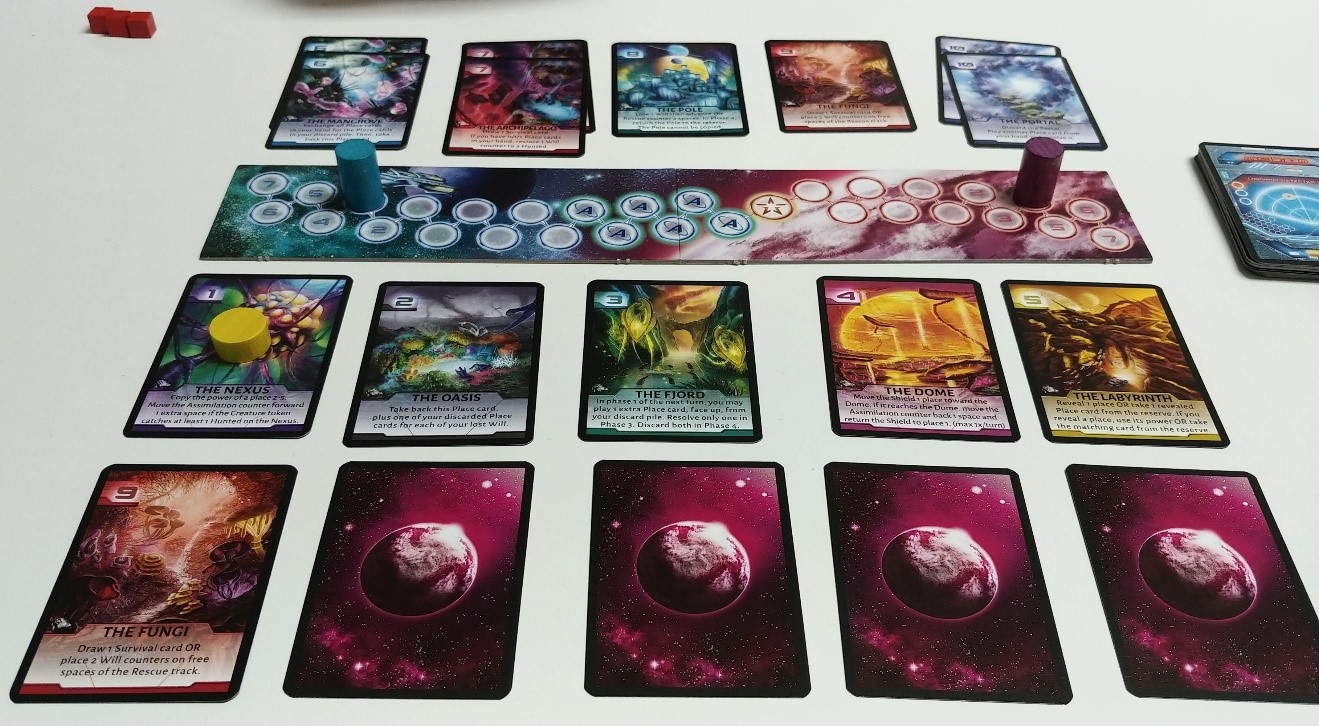 Hope you brought your Nikes because itâ€™s time to start running.

There are now ten additional place cards that you can swap in and out as youâ€™d like. Picking from this new set feels like youâ€™re discovering unexplored reaches of the planet Artemia. Though the Place cardsâ€™ effects arenâ€™t always thematically related to their names, you can stretch your imagination more easily with some of the new locations. For example, there are only two copies of The Pole â€“ one for the Creature and one for the Hunted. Reminding you that youâ€™re in a barren wasteland, you must lose one Will when you use the effect. The Labyrinth evokes a little more sense of wonder as it forces all the undiscovered place cards to be randomly dealt face down. Now the Hunted donâ€™t know where theyâ€™re going, just like the dark days before Google Maps. 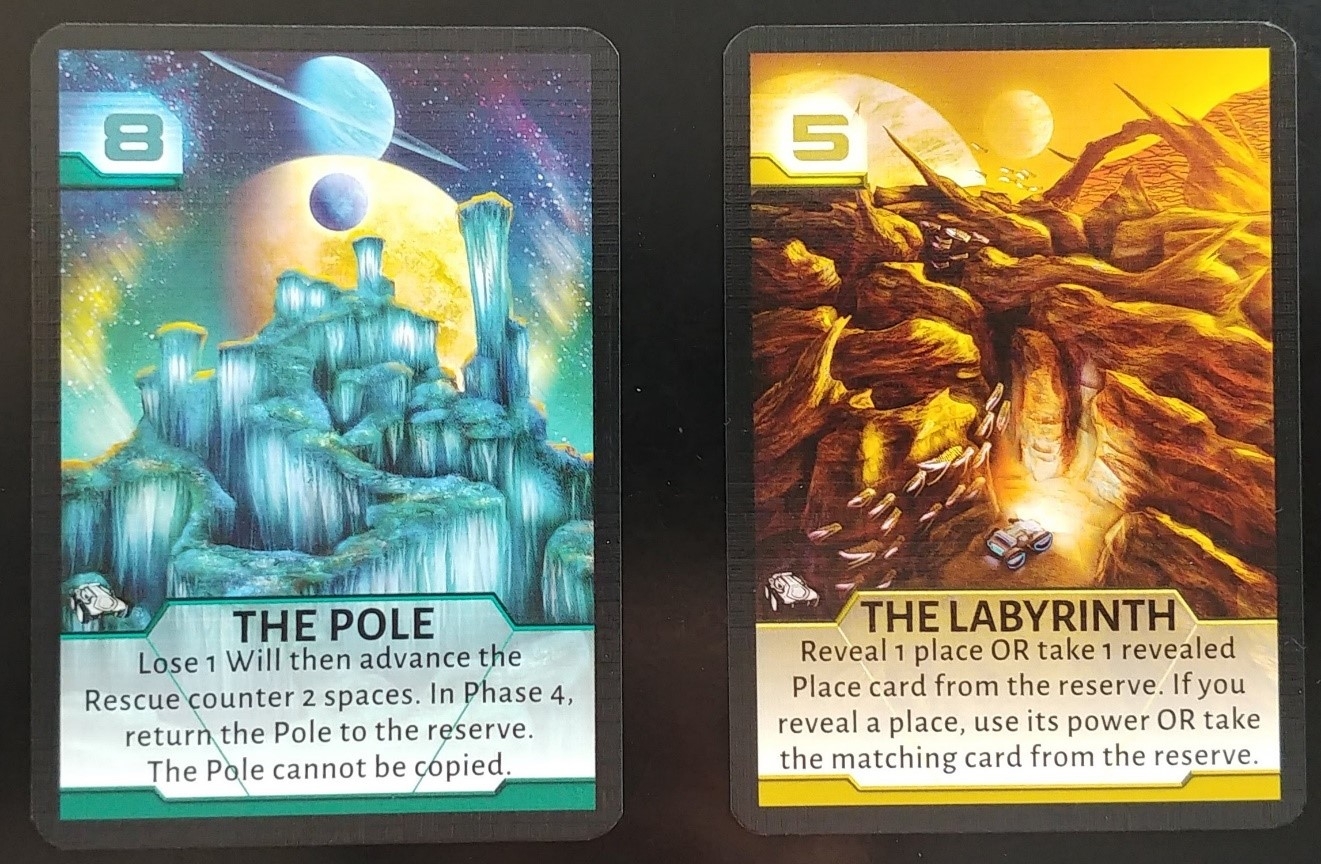 On initial play-throughs, it can take a little while to parse through the text on the Place cards, some of which have more to them than the base game. As you can see above, The Labyrinth has enough â€œorâ€ statements to give an English teacher a conniption. Making sure youâ€™re not missing anything can slow things down, marring the otherwise snappy pace of the game. Keep this in mind if you plan on throwing all ten of the new place cards in at once. However, like the base game, once players get acclimated to the new cards, theyâ€™ll be wreaking havoc for the oh-so lonely Creature in many different ways.

One of my favorites of the new batch is The Fungi, which gives you the choice between drawing a survival card (always tempting) or putting two Will counters on the rescue track. This is a great way to grab an extra Will when normally doing so causes the Creature to creepily advance forward on the assimilation track. And speaking of the Creature getting too close for comfort, The Dome is a particularly tempting place to visit. If the Hunted can get the Shield token to The Dome, it causes the Assimilation counter to be pushed back one space. For those who felt it was too easy for the Creature to win in the base game, cards like this certainly up the difficulty.

You canâ€™t help but feel sassy when playing these.

Also aiding in the Huntedâ€™s struggles are new Survival cards. Mixing in with the cards from the base game, the Hunted now have nearly double the number of tools available to make the Creatureâ€™s life miserable. â€œShuttleâ€ lets the Hunted win the game if they are one space away. â€œDroneâ€ allows a player to take a revealed place card from the reserve instead of using their place card. Knowing these kinds of tricks are possible, the Creature really has to up their mind-reading game and hit the right place at the right time to prevent any of these escape shenanigans.

That moment when you make a temporal rift and remember that youâ€™re hungry.

There are also new Hunt cards for the Creature to combat some of these devious twists and turns. Like the Survival cards, the Hunt deck is nearly doubled as well. To help mitigate that pesky Shield token, â€œInterferenceâ€ moves it back one place. Simpler effects like â€œMemoryâ€ allow the Creature to take back a discarded Hunt card. Not all are that easy though. â€œTelepathyâ€ requires you to name a place, then pick a card from a Huntedâ€™s hand at random. If it matches, then the Assimilation counter is moved forward one space. The elation of pulling this off is worth every groan the Hunted let out.

Not Alone: Exploration is the way I like my expansions: more stuff, same game. The core of game is unchanged. The welcome addition of greater card variety rounds out the base game, making the expansion a must-include in every play. Exploration allows you to play even more mind games as you try to figure out just how well you can outthink your friends. Itâ€™s those moments when their wry smiles turn into surprised outrage that make it all worthwhile.