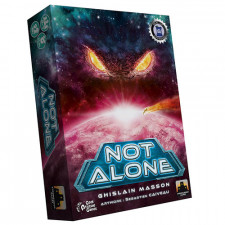 Ever been stranded on an alien planet, trying to find your wrecked spaceship while some creature is stalking you? Of course you have. Weâ€™ve all been there.

Not Alone is a one versus all battle for survival. One player is the Creature, whose only goal in life is to make contact with the other players and give them some overly enthusiastic hugs. The other players, the Hunted, arenâ€™t too keen on this alien PDA and are simply trying to find their ship and escape. The center track marks each sideâ€™s progress toward achieving their respective goals. With each side starting on opposite ends and at unequal distances, whoever hits the victory space first wins. This asymmetric race unfolds through the use of Place cards that represent locations on the planet.

The Hunted each have a starting hand of five Place cards, each with a different effect. You can aid your escape by doing things like progressing along the center track, adding new Place cards to your hand, taking back played cards, and copying other locations. On their turn, all Hunted players simultaneously select one of the place cards in their hand. They can discuss with one another where to go, but it must be aloud. The Creature player represents the planet after all and it can hear everything. After this, the Creature player will place one â€“ and sometimes more â€“ of its tokens of love on the locations on the table, attempting to guess where the Hunted are headed. If a Hunted player is caught, the tight embrace of the Creature causes the loss of a will (i.e., health pool). Thereâ€™s no player elimination in the game, but any time a Hunted is caught or loses all three of their will, the Creature moves one space forward on the center track. Considering the Creatureâ€™s distance to the victory space is shorter than the Huntedâ€™s, youâ€™re now one scary step closer to getting assimilated by the planet. Getting caught also means you donâ€™t get to use the effect of the Place card you selected either. Sorry, human. 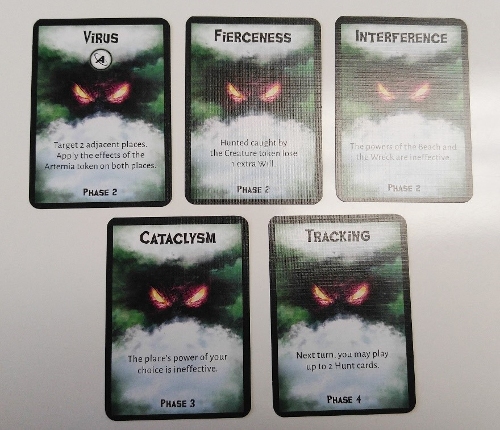 It's not as easy as it looks.

If this premise isnâ€™t already pulling you in, there are a few other aspects to the game that make it worth swiping right for. First, as the Hunted play cards form their hand, they stay in front of them, helping the Creature deduce which locations are likely to be visited. Thereâ€™s a lot of staring deep into the Huntedâ€™s eyes during this part of the game as the Creature player tries to figure out where those elusive friends are planning to vacation. Sometimes, the Creature has to just cross their fingers and make a guess. Trying to read the minds of 2-6 other players is tough, especially once they start adding any of the additional five Place cards from the reserve into their hands. This makes the game progressively more difficult for the Creature who has to deal with the Huntedâ€™s smug grins when having to choose upwards of 10 different locations to go. 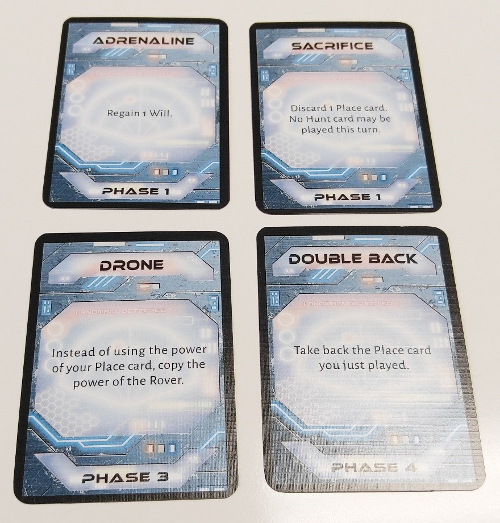 Almost as good as having Ripley on your side.

To aid in these struggles, there are Hunt cards the Creature can play in different phases. These seemingly overpowered cards have a variety of effects, such as making locations ineffective, causing a Hunted to lose an additional will if caught, or any number of other unpleasantries. These Hunt cards are also how the Creature can sometimes use an additional token, doubling its efforts to catch those meddling kids and their dog too. Sometimes, you can even put out all three of your tokens, which really gets your inner omnipresent maniac giggling. Not to be outdone though, the Hunted have Survival cards that are equally unpleasant, balancing out the Creatureâ€™s seemingly unfair advantage. Things like pushing the Creatureâ€™s Assimilation token back on the track, moving the Creature token, or not allowing any Hunt card to be played that round are a defiant middle finger to the Creature who is only guilty of loving you too much.

In about 30 minutes, you have a light but tense game of cat-and-mouse that is equally enjoyable to play on either side. Games are typically close, with a nail-biting finish thatâ€™s got everyone wiggling in their chairs. The game can be a little wonky to explain at first, but others catch on quickly and things start rolling. Though the base game can get a little same-y after a while, incoming expansions are due to add more variety with additional Hunt/Survival cards as well as some new locations. Nonetheless, Not Alone frequently gets chucked in my game bag because itâ€™s always a fun ride of bluffing, double-think, and misunderstood planetary affections.